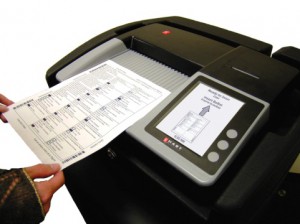 Half of Detroit votes not counted, 87 optical scanners mysteriously failed and judge finds “nothing unusual.”

A federal judge in Michigan has ordered the halt of a statewide recount effort inspired by former Green Party presidential candidate Dr. Jill Stein. The judge determined that the recount was unwarranted, despite the inconsistencies it uncovered.

Michigan Republicans celebrated a victory Wednesday after US District Judge Mark Goldsmith ruled that a statewide recount was unwarranted, effectively cementing a victory in the state for President-elect Donald Trump. Republicans argued that Stein had no authority to seek a recount due to her earning only 1 percent of the vote.

“To date, plaintiffs have not presented evidence of tampering or mistake. Instead, they present speculative claims going to the vulnerability of the voting machinery – but not actual injury,” Goldsmith wrote after hearing arguments.

However, Stein’s attorneys argued that her involvement in the election entitled her to call for a recount. In addition, they also pointed to problems uncovered with their recount, such as in Detroit, where over 50 percent of the district’s votes were not counted for undisclosed reasons, USA Today reported.

Stein took to Facebook Live to discuss some of her team’s findings in the recount, saying, “during election day, it was reported that 87 optical scanners, that is the machines that count your paper ballot, failed.”

While Goldsmith ruled against Stein, he did consider that, “the vulnerability of our system of voting poses the threat of a potentially devastating attack on the integrity of our election system,” although he stressed that it did not justify a recount.

Her attorney, Hayley Horowitz, told USA Today that the recount needs to continue in order to reveal “those problems so that the people of Michigan can see how their election operates.”

Opponents were quick to explain that Michigan’s recount law does not exist in order to prove the legitimacy of the election but rather to contend the results.

“Her entire purpose is to audit the Michigan system,” Michigan Attorney General’s Office John Bursh said in court, where he explained that the recount would potentially cost Michigan taxpayers $5 million.

Stein’s attorneys have already appealed to the Michigan Supreme Court to have the earlier Court of Appeals decision overturned. Stein is also still able to pursue an appeal in the state Supreme Court over the district court judge’s ruling.

More From The Web