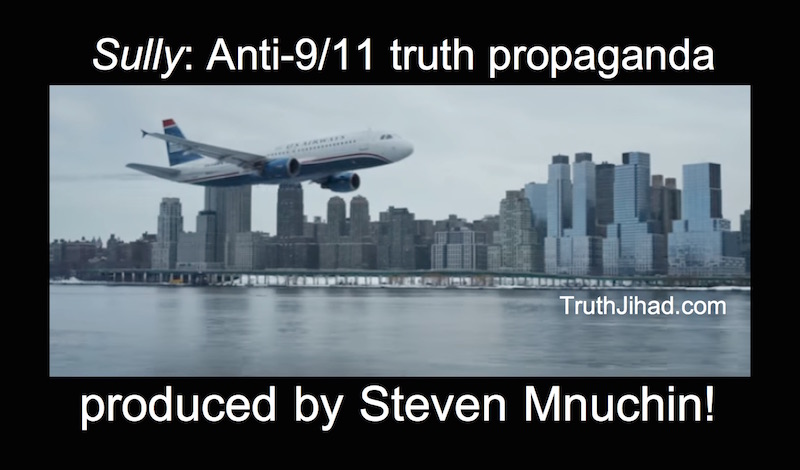 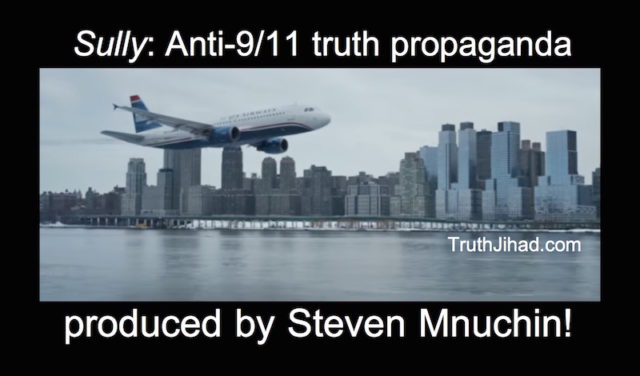 I just saw Sully, a feel-good 9/11/2016 release about a bird-strike-crippled passenger jet plunging into New York City but not crashing into any buildings.

Unlike all of Hollywood’s films about 9/11 and the phony “war on terror,” Sully is based on a true story, not a big lie.

And for what it’s worth, the Executive Producer of Sully happens to be Steven Mnuchin, the Jewish Zionist billionaire ex-Goldman Sachs executive recently tapped by Donald Trump as Treasury Secretary.

To understand how Sully functions as a sophisticated anti-9/11-truth propaganda film, we need to remember the massive trauma inflicted by the 2001 false flag attack on America. In her book Paranoia Switch, psychologist Martha Stout cites evidence showing that nearly half of the American people suffered from clinical PTSD due to images they saw on television that day. The trauma was even greater for New York City residents, whose everyday world, including the skyline, was shockingly-awesomely altered.

Sully, like V for Vendetta but in a very different key, is a cinematic fantasy attempt to work out the trauma inflicted by 9/11. But whereas the red-pill masterpiece V for Vendetta goes straight to the source of the pain (the false flag attack that inaugurated a new world of fascism), blue-pill-dispensing Sully  re-enacts the 9/11 tragedy but appends a happy ending, in a clumsy attempt to bury the hideously painful truth beneath layer upon layer of pleasant lie.

In Sully‘s dream-disguised re-enactment of 9/11, we watch endless loops of passenger plane plunges into New York, yet nobody dies. Talk about wish fulfillment fantasies! The authorities, especially the Tom Hanks pilot character who symbolizes the parental Authority Figure archetype in the film, are competent, benevolent, even downright heroic in their devoted efforts to protect ordinary Americans. (Quite unlike the real circa-2001 President, Vice President, Joint Chiefs, Intelligence Chiefs, and Oligarchs who deliberately connived in the murder of almost 3,000 of the ordinary men and women they had sworn to protect, as well as the shredding and torching of the Constitution they had sworn to defend.)

The viewer of Sully is asked to imagine that the “Miracle on the Hudson” magically healed our collective 9/11 trauma. As a rescuer puts it: “This time nobody dies.” We are all supposed to leave the theater feeling good about our biggest city, our leaders, and our country. Our nightmares about planes crashing into buildings – horrific images of airliners slamming into skyscrapers and erupting into fireballs, depicted in the film as the pilot Sully’s nightmares of what might have happened to Flight 1549 – are now over. The plane has landed safely. It’s a miracle. Now we can all go home safe and happy, our trust in our devoted fearless leaders renewed and strengthened.

But Sully goes even further. It’s moral is: “Do NOT second guess our fearless leaders. They did the best they could. They did the right thing. They did their jobs.” (On 9/11, of course, many of them deliberately did NOT do their jobs protecting us, having been ordered to stand down, while others, the “asteroids” or professional killers, actually did do their jobs, namely killing us.)

To hammer home this lesson, the filmmakers invented a totally fictitious, borderline-libelous angle to the Miracle-on-the-Hudson story. In the movie version, unlike in real life, the National Transportation Safety Board (NTSB) brutally persecutes the pilot Sully, falsely claiming that he could have easily flown the plane back to LaGuardia rather than risking his passengers’ lives by ditching it in the Hudson. Yet the alleged persecution, all sources agree, never happened. The whole film is structured around this preposterous distortion of reality. Why?

Stephen Cass offers a good headline, but a false explanation, in his Guardian article “Sullied: with Sully, Clint Eastwood is weaponizing a hero.” Cass claims the film is a “rightwing attempt to delegitimize government – and in the process undermine the safety of millions who travel by air, train, road and boat.” In other words, Eastwood and his posse, and their boss Mnuchin, are Republicans who hate the government, so they have invented the ridiculous fable of the NTSB persecuting Sully in an attempt to convince viewers to also hate the government.

But that explanation just doesn’t fly (no pun intended). Sully is depicted as a heroic ex-military pilot. Last I checked, the military was part of the government. And Sully portrays a whole legion of government workers – police, cops, firefighters, the Coast Guard, and so on – as heroes. This film is no anti-government screed. Quite the opposite.

So why is the NTSB slandered in Sully? Because they are portrayed as geeky skeptics – computer re-enactors, sticklers for the laws of physics, party-poopers willing to puncture the feel-good “public myth” with the sharpened dagger of truth. In other words, they are the 9/11 truthers…the people who know that 110 story skyscrapers, and even 47-story ones, cannot disappear through the path of most resistance at free-fall acceleration due to kerosene-kindled office fires.

In essence, the film tells us: “Here is a wonderful story about a heroic pilot, Sully, an authority figure to whom his passengers justifiably entrusted their confidence and their lives, and who repaid that confidence in spades by his heroic emergency landing in the Hudson River…a touching, moving story that banished the trauma of 9/11 from our national psyche. Yet a bunch of geeky skeptics refused to believe this story! Relying on scientific data, they said it couldn’t have happened that way! They want us to feel really, really BAD about ourselves and our wonderful (neocon-Republican) leadership, as embodied by Sully and his trusty co-pilot. Boo, skeptics! Watch as Sully gives them their come-uppance!”

It’s no surprise to find director Clint Eastwood dispensing this kind of neocon-Republican propaganda. But who’s paying him? Presumably that would be the Executive Producer, Steven Mnuchin, our new Treasury Secretary.

And who is Mnuchin? Well, he used to work for George Soros. And that’s his good side.

Trump’s campaign team has been staffed to the brim with hawkish Zionists, chief among them his son-in-law Jared Kushner, a close advisor during the campaign and architect of Trump’s fierce allegiance to the child-murdering Likud maniacs in Israel. But there are many others, listed prominently in an article on The Times of Israel website titled “Meet the Jews in Donald Trump’s inner circle: A look at the president-elect’s advisers and their possible roles in his incoming administration.” The article names Jason Greenblatt, David Friedman, daughter and son-in-law duo Ivanka Trump and Jared Kushner, Boris Epshteyn, Stephen Miller, Steven Mnuchin, Lewis Eisenberg (former head of NY Port Authority), and Michael Glassner – all dedicated Israel-first Zionists, the last two actually having helped secure the privatization and sale of the World Trade Centre to Larry Silverstein in 2001.

Donald Trump’s choice for Treasury secretary, billionaire Steven Mnuchin, has at some point been part of nearly every elitist institution that Trump’s voters railed against in the 2016 election campaign. This first Jewish member of the president-elect’s cabinet is also the business partner of a close friend and confidant of Prime Minister Benjamin Netanyahu, Australian billionaire James Packer…In 2013, Mnuchin merged his company Dune Entertainment with RatPac Entertainment (the producer of Sully) co-owned by Packer…(.Menuhin) belonged to the secret society Skull and Bones, whose members include former presidents as well as current Secretary of State John Kerry…After leaving Goldman Sachs, Mnuchin worked at hedge funds including that of George Soros…

Trump’s Mnuchin appointment  is just one more sign that The Don’s Administration will be dominated by the ultra-Zionist 9/11 suspects clustered around Benjamin “Bibi” Netanyahu. So if you think it’s just a coincidence that “moneybags Mnuchin”* is paying Clint Eastwood and Tom Hanks to dispense anti-truth-movement propaganda in a Hollywood blockbuster, you’re probably just a crazy coincidence theorist.