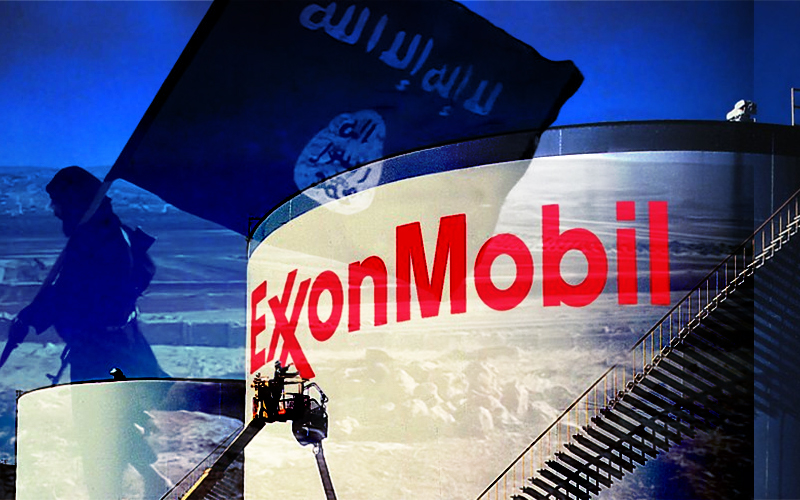 [ Editor’s Note: When oil began flowing out of Iraq after the 2003 American invasion, more than half went through Turkey.  Only half of that was paid for in a “shell game,” mostly with BP and Exxon, that had up to 4 tankers at a time berthing below Ceyhan and sometimes none listed.  Turkish transit fees for the oil were never paid, instead the Turkish military and key political leaders split the money with their partners in Washington, New York and Tel Aviv.

Today it is ISIS oil, still flowing into Turkey but on a smaller scale and now so many years later Wikileaks rears its ugly head.  With Russia Today having “John Pilger” docudramas and still peddling Wikileaks fabrications and the public of most of the world lapping it up with the rest of the fake news, humanity may well have bought their way into hell.  Well, it’s here.

With 12,000 oil trucks, for years running oil into Turkey from Iraq and Syria and the oil pipelines back in the oil theft business, something no one has reported other than VT, all done through the dual client state known as KRG/Iraq, all of it so obvious it has been an embarrassment, the idea that ISIS is something other than the CIA and Mossad is insane.

Years ago we watched Israeli military flood into Syria and Iraq, watched them help the Saudi’s build a command center in Jordan as well, under CIA cover, setting up ISIS military units, supplying and training, recruiting, paying and keeping them up to day with America’s hottest satellite intelligence.

Yes, command and control for ISIS is done by the US Army’s CENTCOM as part of a partnership deal with Israel for intelligence sharing and everyone in the military knows it.  Just look at America’s bombing campaigns?  You know the US has 5000 troops outside Mosul and nobody, not Iraq or the Kurds, acknowledge one bit of help from the US in cleaning out Mosul while the US is fighting to keep ISIS (under whatever name) in Aleppo as well. by Tsvetana Paraskova, for OilPrice.Com

WikiLeaks published on Monday a searchable archive of nearly 58,000 emails from the private email account of Berat Albayrak – Turkey’s incumbent energy minister and son-in-law of Turkish President Recep Tayyip Erdogan – revealing the influence Albayrak has in Turkey and his correspondence regarding Powertrans, a company implicated in oil imports from ISIS-controlled oil fields.

The emails encompass 16 years between April 2000 and September 23, 2016. A search by the ‘Powertrans’ keyword in the published WikiLeaks emails returns 32 results, including emails sent to Albayrak regarding personnel and salary issues at Powertrans.

Turkey banned oil transportation by road or railway in or out of the country in November 2011, but included a provision in the same bill that it could revoke the ban in specific cases, such as meeting the needs of the military. The Turkish government later gave exclusive privilege to Powertrans for transit of oil, WikiLeaks says.

Allegations that Erdogan and members of his family are linked to ISIS oil trade are not new. Last year, almost to the date, opposition lawmaker Eren Erdem said he would soon provide proof of Erdogan’s role in the smuggling of Islamic State oil. Just two weeks later Erdem found himself facing charges of treason.

In October 2014, the U.S. Department of The Treasury published remarks by the then U.S. Under Secretary for Terrorism and Financial Intelligence, David S. Cohen, who is now deputy director at the CIA. Cohen said in 2014:

“According to our information, as of last month, ISIL was selling oil at substantially discounted prices to a variety of middlemen, including some from Turkey, who then transported the oil to be resold. It also appears that some of the oil emanating from territory where ISIL operates has been sold to Kurds in Iraq, and then resold into Turkey.”

By Tsvetana Paraskova for Oilprice.com