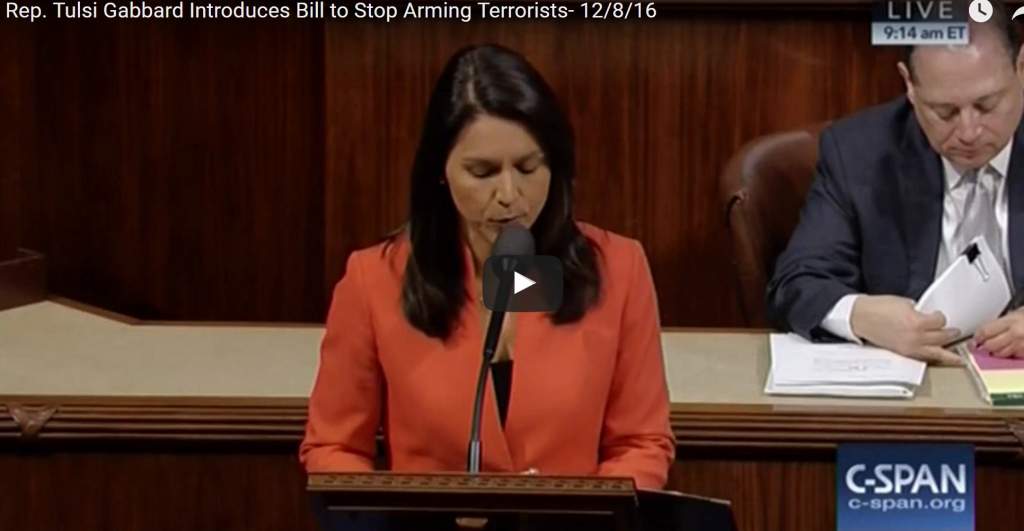 –
American lawmakers have introduced a so-called Stop Arming Terrorists Act that aims to protect US taxpayers’ dollars from being spent on supporting and arming international terrorist groups through covert operations and third states.
–

Introduced to the House on Thursday by Democrat Tulsi Gabbard from Hawaii, the legislature aims to put an end to the widely-reported US practice of indirectly sponsoring terrorism. In particular, the act seeks to make it illegal for any US government agency to assist extremist groups directly or indirectly in any way shape or form, be it through the sale of weapons, field training, or intelligence assistance.

Furthermore, the act, which is being supported by the Progressive Democrats of America (PDA) and the US Peace Council, wants to make it illegal for Washington to provide assistance to any third nation that sponsors terrorists.

The submitters of the legislation argue that any nations or individuals cooperating with Al-Qaeda, Jabhat Fateh al-Sham (formerly Al-Nusra Front), or Islamic State (IS, formerly ISIS/ISIL), should be barred from US funding.

READ MORE: ‘Deal with the devil’: US ‘ready to ally with terror’ to overthrow Assad – Russia Foreign Ministry

On the technical side, the legislature calls on the Director of National Intelligence (DNI) to compile a list of specific individuals, nation states and terrorist groups which would fall within the terms of the act.

Taking the House floor to present the legislature Rep. Gabbard said that it is illegal for America to provide terror groups with money or assistance.

“If you or I gave money, weapons or support to Al-Qaeda or ISIS, we would be thrown in jail. Yet the US government has been violating this law for years, quietly supporting allies and partners of Al-Qaeda, ISIL, Jabhat Fateh al Sham and other terrorist groups with money, weapons, and intelligence support, in their fight to overthrow the Syrian government,” Gabbard said.

The 35-year-old went on to accuse the CIA of providing weapons and money to terrorist groups all over the world through covert operations with the help of Saudi Arabia, Turkey, and Qatar, amongst others. She referred to recent articles by the New York Times and the Wall Street Journal to back up her claims.

“The CIA has long been supporting a group called Fursan al Haqq, providing them with salaries, weapons and support, including surface to air missiles. This group is cooperating with and fighting alongside an Al-Qaeda-affiliated group trying to overthrow the Syrian government. The Levant Front is another so-called moderate umbrella group of Syrian opposition fighters. Over the past year, the United States has been working with Turkey to give this group intelligence support and other forms of military assistance. This group has joined forces with Al-Qaeda’s offshoot group in Syria,” she said

“This madness must end. We must stop arming terrorists. The government must end this hypocrisy and abide by the same laws that apply to its citizens,” she concluded.

“We need to stop the destruction that has been caused by our country continuously getting involved in these counterproductive regime change wars that not only end up strengthening our enemy, groups like ISIS and Al-Qaeda,” the Hawaiian Representative told CNN.

She argued that such US foreign policies cause “more suffering” to the human population in conflict zones such as in Libya, Syria, and Iraq, than before the US stepped in.

Gabbard also noted that during her meeting with Trump earlier, she urged the president-elect to stop the regime change agenda in Syria and halt sponsorship of Gulf countries that do not support Bashar Assad.