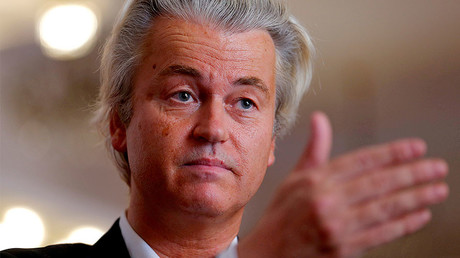 Far-right politician Geert Wilders has been convicted of discrimination and inciting hatred by a Dutch court. However, he received no penalty or punishment for his conviction.

The politician was charged regarding a 2014 incident in which he urged his supporters to chant they wanted “Fewer! Fewer! Fewer!” Moroccans in the Netherlands. The Dutch Moroccan minority was outraged and pressed charges.

The court said it has “legally and convincingly proven” that Wilders insulted Moroccans as a group, as cited by the EU Observer.

Wilders denied any wrongdoing, saying the comments he made, which also included referring to Moroccans as “scum,” are protected as free speech.

Commenting on the verdict, Judge Hendrik Steenhuis said the court decided not to impose a sentence on Wilders, as the conviction was punishment enough for a democratically-elected lawmaker.

The politician is now planning to appeal his conviction, RTL Nieuws reported. He has two weeks to do so.

Wilders is a Dutch anti-EU politician, who made a name for himself as an outspoken orator, often provoking outrage with his remarks.

He repeatedly said his trial is a politically-motivated attempt to damage the image of the Dutch Party for Freedom (PPV), which is headed by Wilders and which has become the most popular party in opinion polls recently, with an election in the Netherlands just around the corner.

In a tweet following the announcement of the court’s decision, Wilders said his conviction was “madness,” and called the judges “haters” of his far-right party.

In a videotaped response to the verdict later on Friday, Wilders also said his conviction was an attempt to silence him before the national election in March.
“I will never be silenced,” he stressed, as cited by Reuters, slamming the ruling as an attempt to “neutralize the leader (himself) of the largest and most popular opposition party in the Netherlands.”