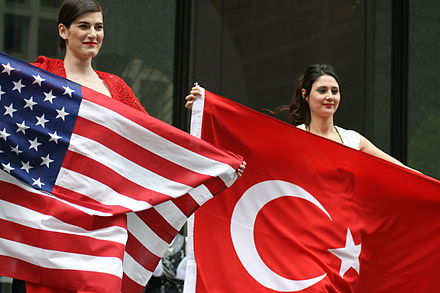 A Turkish-American businessman who is head of the Democratic National Committee’s Heritage Council claimed to have paid a former GOP congressman to write a pro-Turkey op-ed last year and also provided secret updates on his own political activities to members of Turkish president Recep Tayyip Erdogan’s inner circle, newly released emails reveal.

The businessman, Murat Guzel, was also interviewed by the FBI earlier this year along with several Turkish nationals linked to its government, other emails indicate.

The bombshell revelations come from the hacked email account of Berat Albayrak, Turkey’s energy minister and Erdogan’s son-in-law. The emails, which number more than 57,000, were originally released by a hacker collective called RedHack, but they received little attention in the American press until they were published on Monday by WikiLeaks.

The documents, almost all of which are in Turkish, shed light into many secret activities between Erdogan’s government and U.S.-based operatives working to further Turkey’s agenda.

Guzel, who owns Nimeks, an organic juice company based in Pennsylvania, has perhaps the biggest political footprint of any of the operatives identified in the emails.

He has contributed nearly $300,000 to committees that supported Hillary Clinton for president, and his Facebook page is replete with photos he has taken with the former secretary of state and other top Democrats.

He’s given hundreds of thousands of dollars more to various Democratic politicians, and has visited the White House on several occasions. One of Guzel’s Facebook photographs shows him sitting in on a meeting with President Obama.

And writing under his title as chairman of the DNC’s heritage council and as an officer with the National Democratic Ethnic Coordinating Council, Guzel endorsed Clinton in an op-ed published in The Hill on Nov. 2.

But in addition to his steadfast support for Democrats and his official positions with the DNC, the emails hacked from Albayrak’s account suggest that Guzel, who is a naturalized American citizen, also appears to have strong allegiances to his native land and to Erdogan.

“To stand by Erdogan and do whatever we can against evil powers is not just an act of kindness but rather an Islamic obligation upon all of us,” he wrote to Albayrak in an Oct. 19, 2014 email which was translated for The Daily Caller by a Turkish citizen.

Erdogan, who is an Islamist, has come under increasing pressure from human rights groups because of his crackdown on the Turkish press and dissenters. RedHack released the Albayrak emails after Erdogan’s government refused to release a group of activists from prison.

Guzel, who is a director at MÜSİAD-USA, a Muslim business association that represents Turkish companies, is seen in the emails reporting his activities to Albayrak as well as to Bilal Erdogan, the son of Turkey’s president, and Ibrahim Kalin, Erdogan’s press secretary.

Some of the emails show that Guzel asked the Turkish officials for help in coordinating his political activities in the U.S. In turn, he was directed to coordinate with other U.S.-based operatives to push Turkey’s political issues.

In one Oct. 20, 2015 email, Guzel told Kalin about an op-ed he helped place in The Washington Times written by former Indiana Rep. Dan Burton.

In the piece, entitled “Why Turkey Matters,” Burton, who retired from Congress in 2013, praised Turkey as the U.S.’s “biggest friend and ally” in the Middle East.

Guzel told Kalin that he paid Burton for the op-ed and helped the Republican write the article. A translation provided to TheDC reads:

Congressman Dan Burton is the person invited by us to AKP Delegation Meetings in Turkey and you can find his article about Turkey below. He had worked over 30 years at the state department as a congressman and we were able to get an article from a very important person and we didn’t spent that much money for it. I have worked alot to make this happen but your help and the time that we spend together help him to make the main points of the article. without your and yasin hoca’s help and warm welcome this article had been not written. Congressman and I appreciate it to both of you.

“Yes it was a good work. Thanks. We need to increase this type of writing. We publish this in Turkish,” he responded.

Guzel also told Albayrak and Bilal Erdogan about a meeting he had in Nov. 2014 with Pennsylvania Rep. Matt Cartwright.

Cartwright had recently praised Fethullah Gulen, a Muslim cleric from Turkey who lives in exile in the Pocono mountains and is Erdogan’s top enemy. Erdogan has for several years accused Gulen and his millions of followers of attempting to undermine the Turkish government. The rivalry reached a peak in July after Erdogan accused Gulen of masterminding a coup.

In his email, Guzel informed Albayrak and the younger Erdogan that he told Cartwright that the Democrat had been the recipient of illegal campaign contributions made by foreigners who support Gulen.

“You did the job very well,” Albayrak replies. “I need to be very dynamic and active in these matters. It is also important that you act in coordination there.”

In a phone interview on Wednesday, Cartwright confirmed that he met with Guzel. But he said he does not recall that Guzel was threatening in any way. He said that he considers Guzel a friend. He also reaffirmed his support for Gulen.

Cartwright returned the donations from the Gulen supporters shortly after that meeting out of “an abundance of caution,” he told TheDC.

The DNC’s position on Guzel’s behind-the-scenes activities are unclear. The party did not respond to several requests for comment. It’s also not clear if Guzel was working directly for the DNC at the time he sent the emails.

It is also not known how much Guzel allegedly paid Burton and why the retired congressman did not disclose his lobbying activities. Burton, who is registered as a lobbyist for only one other client, is the former head of the Azerbaijan America Alliance. During his time in Congress he was accused by an FBI whistleblower named Sibel Edmonds of accepting bribes from Turkish agents.

Burton did not respond to two requests for comment.

Other emails hacked from Albayrak’s account indicate that Guzel was interviewed by the FBI several months ago.

In a Sept. 8 email, Ibrahim Uyar, an executive at MÜSİAD-USA who co-founded a group called the Turkish American National Steering Committee (TASC) along with Guzel, informed Albayrak that he was questioned for an hour by two FBI agents.

“They asked about MÜSİAD and TASC. They are accusing me of trying to intervene in American politics on behalf of our president and working as a secret agent in the name of the Republic of Turkey,” he wrote, according to a translation of the email.

He also said that “they have studied our work in the last two years.”

[dcquiz] He added that Guzel and several other MÜSİAD board members, including Mustafa Tuncer, Emre Eren and Halil Danismaz, were also interviewed.

Danismaz is the former president of the Turkish Heritage Organization and was in frequent email contact with Albayrak and Bilal Erdogan.

Reached by The Daily Caller, an FBI spokeswoman declined to say whether the interviews of Uyar, Guzel and other MÜSİAD took place. She said that the bureau does not confirm or deny the existence of investigations.