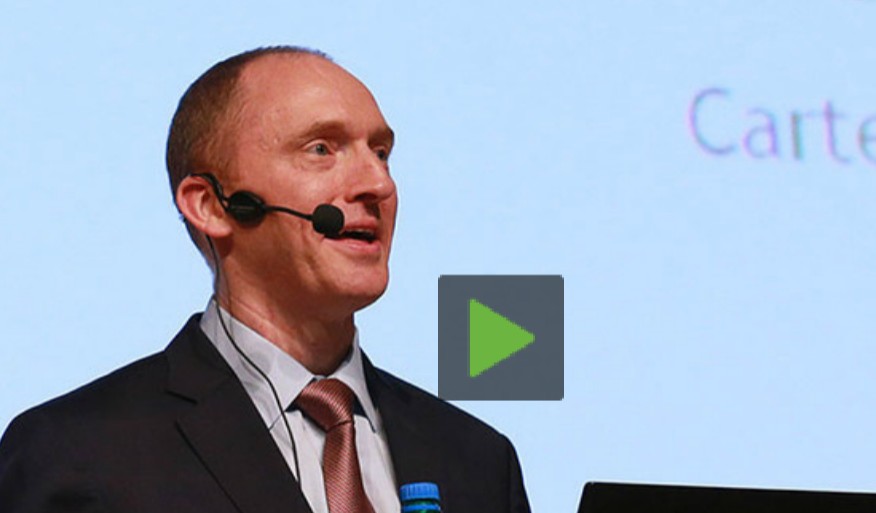 Carter Page, a businessman who advised Donald Trump on foreign policy matters during his presidential campaign, has arrived in Moscow to discuss strengthening business ties and normalizing relations between Russia and the United States.

Page, who arrived in Moscow on Thursday, said he would be in the city until December 13 to meet with “business leaders and thought leaders.” In an interview with RIA Novosti, Page said he believes it is extremely important to address the narratives that led to the sanctions stemming from the Ukraine crisis, and normalize relations between Russia and the West.

“The recent history of Ukraine in general and Crimea in particular over the past several years may be among the most egregious examples of ‘fake news’ in recent memory,” he told RIA Novosti.

“The level of misinformation which has guided related decisions by outside actors and their impact on this country is tragic. I am confident that there will be new possibilities to resolve these misperceptions and the wrong direction it has created for Ukraine.”

“It is my firm belief that the opportunities for private sector cooperation in the Russian economy have never been as great as they will be in the coming years. Although the failures of many hostile western policies as well as the inevitable, logical responses from Moscow have constrained such possibilities throughout recent decades, the possibilities today are unparalleled.”

Page also said he was keen for the Russian market to reopen for American investors who had been stopped from doing business by sanctions.

“US and European companies are very interested in returning to the Russian market,” he said. “Their interest cuts across a vast array of sectors.”

“The hostile efforts to punish Rosneft and their senior management team through western sanctions have primarily hurt western companies, rather than their intended target.”

Page, who claimed that he was no longer “directly involved” in any transition activities, nevertheless told RIA that according to his contacts in Washington, the process to mend Russo-American relations was going “exceptionally well.”

As an outsider with little political experience, Page, who has worked in Russia before on a number of business projects, is very much in the mold of Donald Trump. However, his close ties to Russia raised suspicions in some circles about supposed links between Trump’s campaign and the Russian government, as well as sanctioned individuals such as Igor Sechin. When the allegations surfaced, Page denied meeting with Russian officials but nevertheless took a leave of absence from the election campaign.

“This is in the best interests of the candidate,” he told Washington Post journalist Josh Rogin in September. When asked to comment on Page’s remarks, despite the apparent optimism Kremlin spokesman Dmitry Peskov took a more measured approach.

“Moscow will continue to appreciate the official statements of Barack Obama and his administration until the end of January,”Peskov told RIA.

Carter Page is, most significantly, a businessman, who like Donald Trump, says there are “plenty of opportunities in Russia that should be pursued by Americans,” Daniel McAdams, the executive director at the Ron Paul Peace Institute told RT.

“On a pragmatic level, and I think Trump, if anything, is a pragmatic person. He understands that the people that are getting hurt are the American business people not allowed to do business with Russia,” McAdams said.