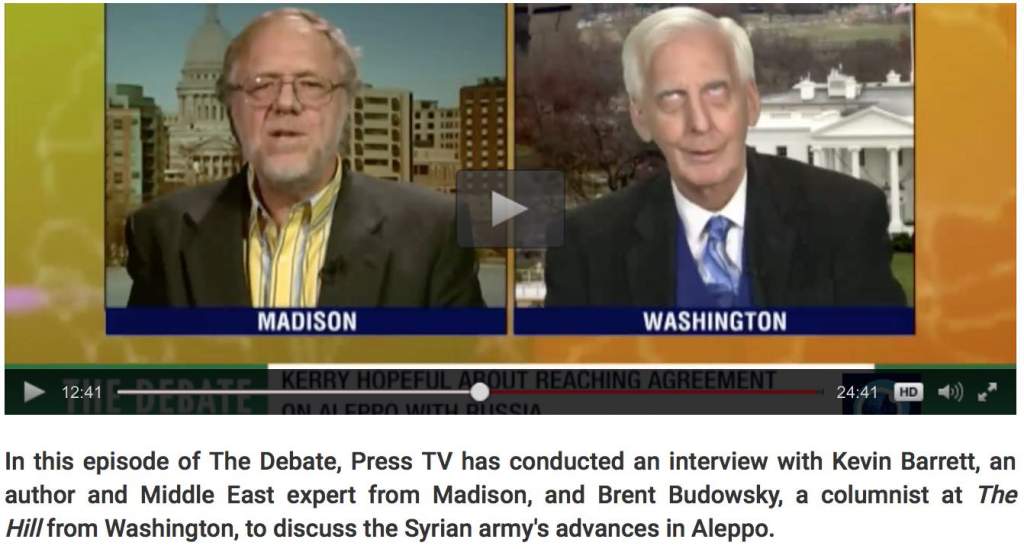 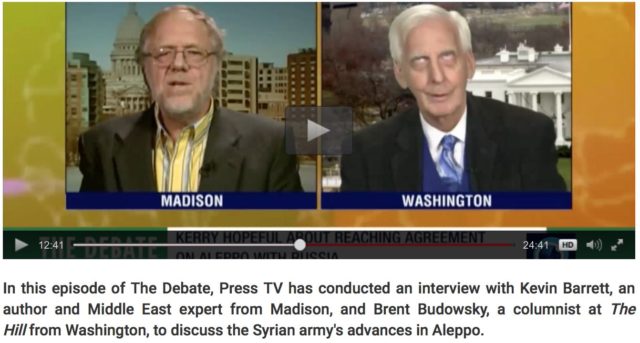 Russia says Moscow and Washington are close to reaching an understanding over the crisis in Aleppo. The Western side is pushing for a ceasefire in eastern Aleppo just as Syrian troops are coming close to liberating the city.

Barrett said since the United States needs to continue its proxy war in Syria, Washington resorts to any kind of tactics to impede the annihilation of the foreign-backed terrorists who are besieged in eastern Aleppo.

“These folks (the US and allies) who are dedicated to keeping this war going as long as possible and destroying Syria as long as possible find that very convenient to call for a ceasefire right at the moment that the [Syrian] government is taking the city,” he said.

Barrett said Syria’s “legitimate government has been targeted for overthrowing and regime change by a group of countries that created this horrific extremist ISIS-style mercenaries.”

“The US empire with its Zionist controllers are destroying Syria in an act of aggression,” he said, adding “the biggest winner of all of this destabilization of course is the expansionist [regime] in Tel Aviv.”

The analyst said the Syrian government is justified in its war on terrorists despite the “horrific destruction in Aleppo and all over Syria,” while it has also offered an amnesty for all Syrians.

“Any country in the world is going to use counter-insurgency warfare to preserve its territorial integrity if there is this kind of foreign-sponsored rebellion going on.”

According to Barrett, “a lot of people in the region and a few people outside the region like Russian President Vladimir Putin” have got in the way of the US-led coalition which tried to turn Syria into a failed state.

Brent Budowsky, a columnist with US newspaper The Hill from Washington, called on Syria and Russia to halt military operations in the eastern Aleppo.

“We need a ceasefire today. We should have had it a year ago or two years ago,” he said.

The Syrian army troops and their allied forces are now in control of about 85 percent of militant-held eastern part of Aleppo as they press ahead with an all-out offensive to fully dislodge foreign-backed terrorists from the northwestern city.