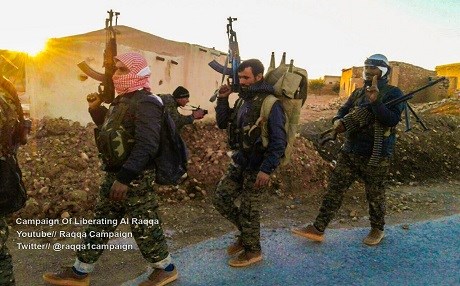 The SDF progressed 8 kilometres and liberated six villages in the second phase of the military offensive to oust ISIS from Raqqa. Photo: Raqqa liberation campaign/Facebook
ERBIL, Kurdistan Region – Coalition forces have reportedly carried out airstrikes on strategic bridges and routes in the countryside west and northwest of Raqqa as the second phase to retake that city is underway with the liberation of six villages.

The conflict monitor Syrian Observatory for Human Rights reported that warplanes “believed to belong to the International Coalition” on Saturday bombed “bridges and corridors” in the countryside west and northwest of Raqqa.

The coalition, in their daily report of airstrikes, stated that on Saturday they carried out one airstrike near Raqqa that destroyed an ISIS-held building and ten strikes near Ayn Isa, 50 kilometres north of Raqqa, that “engaged five ISIL tactical units; destroyed an IED, three fighting positions, and a weapons cache; and damaged eight ISIL supply routes.”

The Syrian Democratic Forces (SDF), the ground force conducting the military offensive, advanced 8 kilometres and liberated six villages within 24 hours, the campaign reported on its Facebook page on Sunday.

The aim of the second phase of the campaign to liberate Raqqa, dubbed Wrath of Euphrates, is to clear the countryside west of the city, further isolating ISIS in their Syrian stronghold.