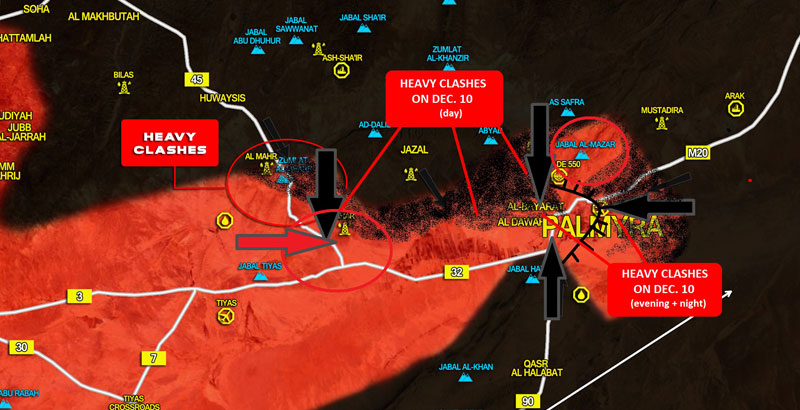 Earlier this week, a massive offensive was launched by the Islamic State (IS) terrorist group in the Palmyra countryside, the Al-Masdar news portal reported. Terrorists targeted several sites, located around the city, trying to return the territories, which they lost earlier.

On Saturday, another big offensive was launched by the terrorist group near eastern gates of Palmyra. IS terrorists committed a successful suicide attack on Syrian troops and captured the strategic Grain Silos. After that, terrorists launched an assault on Jabal Tar. It was the first time in the last several months, when the IS has had a presence in this mountain chain.

As a result of these actions, the terrorist group is quickly approaching to Palmyra, as its members surround the city from all defensive flanks.

According to a military source in Tartous, the High Command of the Syrian Army is currently considering redeployment of its elite Tiger Forces to the Palmyra front in order to help to drive out the terrorist group from the area. However, there still has not been any official confirmation of this information. The situation around the Syrian city of Palmyra has ratcheted up sharply. There is a real possibility of taking the city by the IS terrorist group.

The breakthrough and rapid advancement of the IS took place due to fundamental mistakes of commanders of units of the Syrian Army, deployed in the Palmyra area, who just let their guard down. They did not pay due attention to fortification activities, processes of equipping positions with engineering and combat hardware, as well as were carelessness during tactical reconnaissance and assessment of the forces and means of attackers. As a result, commanders did not report the all necessary information to the higher command in Damascus on time, thereby, deluding it. However, this fact does not remove the responsibility from the central command.

There are several reasons, which explain the emergence of so many mistakes at one and the same time:

In the afternoon of Saturday, the Syrian Air Force and the Russian Aerospace Forces started to carry out massive airstrikes on the advancing units of the IS, its logistic support and sustainer convoys in order to remedy the situation. According to some reports, the work of the air power forced the IS units to suspend the offensive. However, it is obviously that the fighting will continue with the onset of the night time.

The Syrian command is well aware that the situation cannot be solved only by airstrikes. For this reason, combat-ready units of the Syrian Armed Forces are urgently being dispatched to the area of Palmyra. The substantial forces have already been redeployed there. There is information that there are Russian military specialists, and not only advisors, among the redeployed units of the Syrian Army. The penetrating force on the flanks of the IS advancing units is also being built up. Apparently, Damascus considers a possibility of a large-scale counterattack or diversionary operations.

In any case, it appears that the IS terrorist group has already lost the initiative. Apparently, initially, terrorists planned to advance rapidly and capture the city within 72 hours. IS almost managed to do this, but only almost. Despite all the mistakes, about which we talked before, the military machine of Syrian-Russian-Iranian allies has begun to move. Now, the IS units are in a difficult situation. Perhaps, the IS command believes that this night and Sunday morning will be key in the operation, but the operational situation at the front at 22:00 pm on December 10 is already not in favor of the IS.