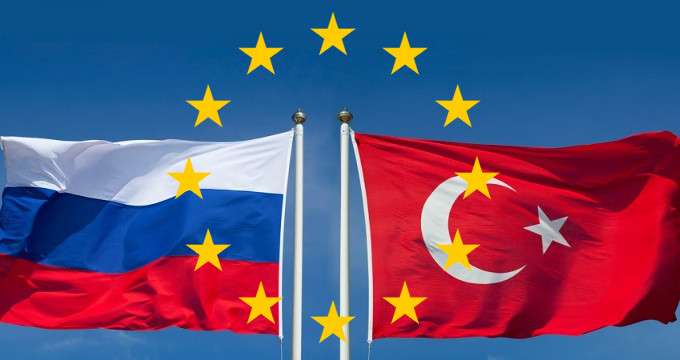 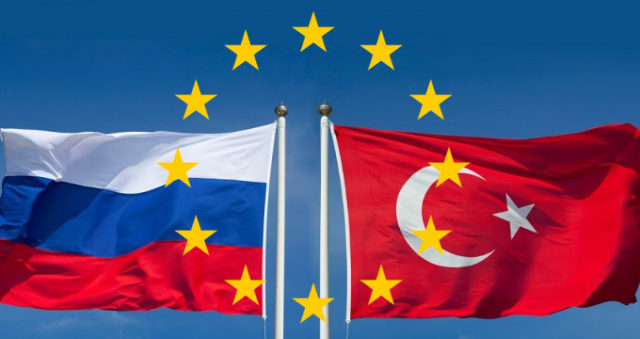 Introduction
Trump, the president-elect of the United States, caused increased uncertainties both in his home country and around the world three months before he takes office. These uncertainties are centered on three main areas.

The priority situation for Turkey and Europe is the second main area.

Institutions and Factors Affecting US Political Management Structure
The United States is governed by a two-chambered presidential system in which federal representatives are located. Both parliaments are formed by two political parties.
The system is controlled by a powerful, efficient and independent judicial power. The USA government, at the age of 240, eventually passed on to the present system after civil war and long-term turmoil. Since the Second World War, the United States has been the world leader in economic, military and cultural affairs. The country has two major economic crises in 1929 and 2008. The effects of the last crisis are still ongoing. The social problems created by income distribution disorder are increasingly growing in the USA. While the black-and-white distinction has gained momentum again, new discrimination signs appear for Latin and Hispanic minorities.

How and why is Trump Elected?

After it was reported that he fell behind Clinton on the polls, how Trump surprisingly won the election is still being debated. Let’s try to analyze the situation under historical preliminary information and current conditions. Despite its establishment in 1921, the CFR (Council on Foreign Relations), a derivative of the Finance Capital System, has become more active in the US administration system with the Jewish and Greek Lobbies since the 1980s.

In this regard, their role in the Congress (representatives, parliament, and senate) and presidential elections is widely acknowledged. It is impossible to deny the political influence of this new power that seized the USA government system. Due to the oppressive, imperative, global economic system that started in 1990, the governance of the countries, especially the USA and England, has been overtaken by multinational corporations rather than politics.

Today, these companies can still influence the governance of the USA and key countries in the EU. Al Gore, former USA president-in-chief, highlights this in his book The Future, published in 2013: In our world, the power of the state is increasingly being taken over by business, finance and media organizations. Governments take their decisions in such a way that they can see the interests of these institutions, which constitute the main funding source for political parties.
When you look at the management team that Mr. Trump is forming, it can be said that the USA will be in harmony with Finance Capital System and FED. At this point it is almost certain that the main scenario change will be the USA’ plans and strategies in the Middle East. To what extent will the expectations of the centers that support Trump in election be met? How will this affect the EU-USA relations? Trump is an American businessman. For this reason, he should be expected to focus on pragmatic solutions and clear results.

But in doing so, will Trump, unlike Obama, use his military power directly and more effectively, or will he focus on solving it with more peaceful, more compromising and allied strategies? Time will show. Why did the system prefer Trump instead of Clinton? The answer to this question is important. And it seems that the answer is related to Obama’s policies against Israel, which he has been pursuing over the last eight years in the Middle East and where Clinton was expected to continue if elected. Which are;

Why is Israel an Indispensable Country?

Israel has been favored by all the previous USA administrations thanks to the Finance Capital System, which the Jewish lobby controls at a significant level, and protected by a special alliance.  It can be said that as long as the political influence of this supreme imperialism continues, this privilege of Israel will continue in the USA.

Israel is the only country to receive advanced technology transfers, especially in the field of defense industry, as well as receiving unrequited financial assistance from the United States. In the next decade, it has been decided that Israel will receive military assistance of $ 37.5-40 billion. This is the greatest amount of aid in American history.

Although Israel is not a NATO and EU member, it has all the privileges of any member. Until today, all complaints and sanctions brought against the UN Security Council about Israel have been stopped by the United States. Israel, which has nuclear weapons, escapes UN control. In summary, the US sees Israel as an indispensable country for its interests in the region. Due to the support provided to Trump, it can be expected that the USA will be more compassionate and supportive in relations with Israel during the Republican period.

What are Israel’s Expectations from the US?

The proportional advantage that the widespread war in the Middle East has provided for Israel has led to the prominence of its economic priority projects. The first priority is to deliver natural gas in eastern Mediterranean to foreign markets as soon as possible. In this regard, negotiations on the Turkish route continue. It may be the case that Trump supports these negotiations to be put into action.

It is one of Israel’s main anticipations that the nuclear deal is suspended and re-embargoed so as to narrow Iran’s regional influence. In order to make Jerusalem the capital of Israel, the USA embassy in Tel Aviv is expected to be moved to this city.  After the cleanup of the ISIS from Syria and Iraq, the new political structure in the region will take place in the direction of Israel’s will.

How Did the US Give the Green Light to a Kurdish State?

Trump’s Security Advisor Michael Flynn explained that a Kurdish state would be established in the region. In this context, the first questions that come to mind are in what region, by which population and under whose protection this state will be established. The current situation in the geography of Iraq suggests that this new Kurdish state will be built on the basis of the independence of the Iraqi Kurdish Regional Government. In this case, the PKK issue for Turkey will enter a new process.

What will be the PKK elements, 73% of which are Turkish citizens? They will either remain in the Barzani region or end terrorism by integrating with the system, or they will continue to export terror to Turkey in the same position. In this case, the Barzani government will have to cooperate with Turkey on terrorism. Otherwise, there may be a serious crisis between the new Kurdish state and Turkey.

If the Kurdish state is established, who will control Mosul and Kirkuk? More importantly, the USA will have to safeguard the Kurdish state, which it declares to be established, for many years. If terrorist activities against Turkey continue in this period, Turkey and the USA may have to clash. The Kurdish state may also become a source of trouble for Iran. Because the Kurdish state under US control can assume the role of buffer against the influence of Iran over Iraq and Syria.

This is one of the main strategic aims of the new Kurdish state for the United States. As for the ongoing civil war in Syria, the US has chosen Syrian Kurds as a partner, as it has in Iraq. The Syrian Kurds are currently being used by the USA against the ISIS. Only if the ISIS danger ceases to exist, Syrian Kurds could actually be used as a buffer to narrow the influence of Turkey and Iran in the region. This strategy is in line with the policy of stopping Arab sectarian fanaticism with a Kurdish card, which Israel has been pursuing since many years.

Expected Scenarios in Syria after ISIS

When the conflicts in Syria and Iraq come to an end, the new order will affect a period of at least 50 years ahead. How will the economic, strategic and political structure of the region be? At the heart of these scenarios are two main economic projects that affect political and military construction.

It is clear how difficult it is to fulfill these requirements because of the ongoing conflicts.
For this reason, Israel, without waiting for its own extracted gas, has accelerated its projects to offer it to foreign markets.

The expectations in the second scenario group are at least as hard as the first ones. The region is experiencing chaos due to the lack of mutual agreement and insecurity between two opposing nuclear powers such as the United States and Russia and regional geopolitical players like Turkey and Iran. Post-ISIS scenarios are still uncertain.

The Dangers Awaiting Turkey and the Way Out

Turkey has got out of the strategic gap and uncertainty with the Euphrates Shield Operation, which started on August 24, 2016, has completed three months. Turkey’s goals and objectives in this operation do not overlap with the United States. On the contrary, there is a silent agreement with Russia and consequently the Assad regime.

Hence, Putin has personally confirmed that the last missile attack on the Turkish tank did not originate from Russia. Turkey has announced that it has no other purpose than to establish a safe zone on the southern border. However, the USA, which appears to intend to form a Kurdish belt in the south of Turkey, is following a strategy that plans to bypass Turkey in a new political and military power balance shaped by recent developments in the region. This strategy pushes Turkey, a NATO member, towards a security center based in Russia.

This strategy is thoroughly erroneous. Because, if the US continues the strategies that it implements and applies against Russia on a continental scale, it cannot do so without Turkey, which controls the Turkish Straits and balances Russian naval forces in the Black Sea. As long as Turkey has military power in Syria, it is important that it acts coordinately with the regime through Russia and Russia.

In parallel with this, in the context of large energy projects in the region, Turkey’s strategic cooperation with Israel in a serious and reassuring manner can fix USA-Turkey relations. Turkey should be prepared for various pitfalls that would disrupt relations with Russia. Russia’s greatest fear is the closure of the Straits in case of a crisis and conflict with Turkey. Hence, following the downing of the plane incident, Russia, in the face of hostile explanations and practices, made official statements of concern about the closure of the Straits.

Mr. Tarakçı was born in 1949. He is retired at the naval captain rank from Turkish Naval Forces in 1999. He became Ph. Dr. in naval history in 2004. But he is also studying in the geopolitics, security and defense matters. He worked for NATO between-1996-1999. Instructed International Organizations, International Security Problems, Turkey and Its Neighbors, Geopolitics and Geo-strategy, Public Administration, Conflict Prevention and Crisis Management, Turkish Politics, Foreign Policy Strategies are the courses instructed in Ege, Yaşar and İzmir Economy Universities in the period of 2000-2006. Mr. Tarakçı has also tasked in Erasmus Program of EU as instructor in Ege University. At the moment he is instructor of Turkish War College. Mr. Tarakçı has 9 books issued in Turkish.