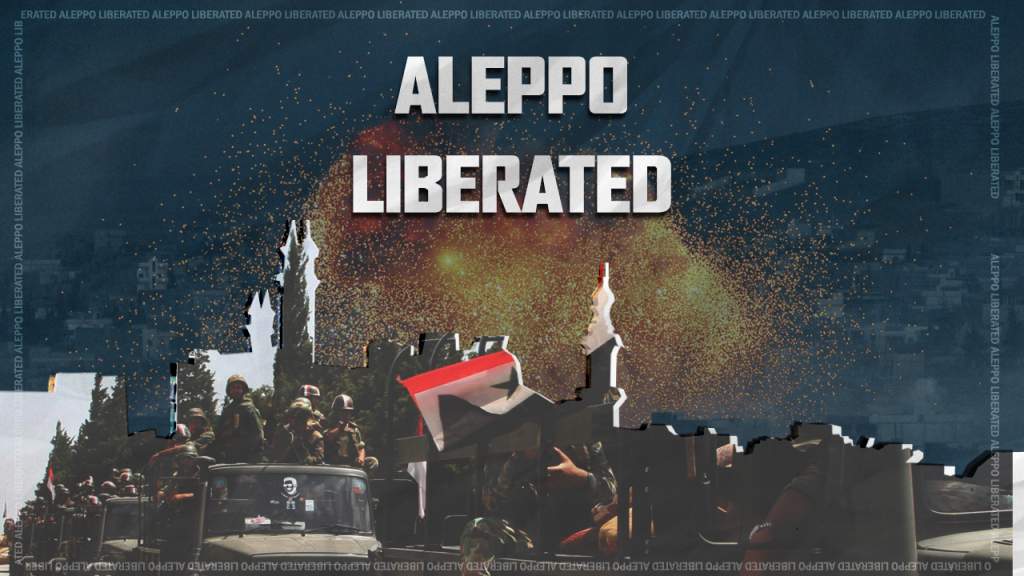 The United States and its allies from the so-called “civilized world” have one time faced the destruction policy and unwillingness of the Syrian-Iranian-Russian alliance to save Aleppo from the humanitarian crisis, and to negotiate a peaceful solution of the conflict, transferring the power in Syria from the democratically elected president to Al-Qaeda linked militants, backed by the US-led block.

Instead, Syrian forces, backed by Russia and Iran, non-democratically purged terrorists in Aleppo city and saved eastern Aleppo civilians that had been held hostage in the area.

The mainstream media already called this operation the biggest victory of ‘Assad regime’ in the ongoing war in military, PR and diplomatic terms. However, the war is far from its over in Syria.

Now, Russian and Syrian engineering units are working in Aleppo city to demine its residential areas and allow local population to return their homes. At the same time, a large-scale operation aimed to restore the crucial city infrastructure is set to be started. Providing of medical assistance, including evacuation of violently ill people to Damasucs, Tehran or Moscow, energy, food and water supplies are the top-priority. The next step is restoration of hospitals, schools and other social and infrastructure objects.

In military terms, the liberation of Aleppo means that over 25,000 pro-government fighters that used to be involved in it are now free and a part of it can be redeployed to other front-lines. Before launching new full-scale operations, the Syrian military and its allies will need to regroup, resupply and rotate their forces and to improve security of the Aleppo countryside.

Then, government forces will likely focus on purging miltiant-held pockets near Homs and Damascus. Every pocket draws forces and facilities that the Syrian army could use at other frontlines. So, these areas have to be liberated by force or by agreements with militant groups and to secured by police formations. If all small pockets will be liberated, Damasucs will get a significant number of soldiers for further operations across Syria.

The advance in the direction of al-Bab also looks not likely because this could lead to full-scale military confrontation with the Turkish Armed Forces. However, the Syrian government will likely provide assistance to Kurdish YPG forces if they decide to clean some al-Bab outskirts from pro-Turkish militant groups. The realism of this scenario highly depends on existence or non-existance of some unofficial diplomatic agreements in the Damascus-Tehran-Ankara-Russia axis.

Palmyra will be a high priority front in the nearest future. Major ISIS advance pushed government forces to deploy reinforcements to the area and to focus on retaiking the ancient city that ISIS wants to use as gates to central Syria.

The start of major operation in Idlib province will remain the strategic priority of Damascus, Moscow and Tehran in the midterm. The successful advance will allow to purge the remaining al-Qaeda linked formations in the area and to push to reconciliation organizations that would succeed in cutting off ties with hard-line groups such Jabhat al-Nusra, Jaish al-Islam and Ahrar al-Sham. In case of further radicalization of the so-called “opposition”, the Syrian-Iranian-Russian alliance will be pushed to repeat Aleppo-like scenario in Idlib province.

With loss in Aleppo, the US-led block and its proteges in Syria lost negotiating positions on the diplomatic level of the ongoing conflict. Right now, to unite efforts and to bargain a kind of economic autonomy and a piece of power in the Assad government looks the only practical solution of their problems. If anti-Assad forces in Syria keep to use Obama’s mantra ‘Assad must go’ in the modern situation, they will likely come to another devastating military defeat after which terms and conditions of possible reconciliation will be much worser than now.

The support of the mainstream media and so-called non-governmental organizations that continue attempts to accuse the Syrian military and its supporters in war crimes will not help because propaganda statements cannot change the objective reality on the ground. However, Damascus, Tehran and Moscow have to be ready to repel a new wave of media and diplomatic attacks from different directions.