“You didn’t need a security clearance to figure out who benefited from malicious Russian cyber activity,” White House spokesman Josh Earnest said at a briefing. “The President-elect didn’t call it into question; he called on Russia to hack his opponent. He called on Russia to hack Secretary Clinton. So, he certainly had a pretty good sense of whose side this cyber activity was coming down on.”

Earnest’s comments were the strongest words from the White House so far and came a week after President Barack Obama directed the intelligence community to compile a report on Russian hackings in relation to the Nov. 8 vote and the campaign building up to it.

In October, U.S. intelligence agencies publicly accused Russia of attempting to disrupt the election through alleged hacks of the Democratic National Committee and the private email of Podesta.

Senate Majority Leader Mitch McConnell and House Speaker Paul Ryan are backing a congressional probe but Ryan’s office said in a statement that the investigation should not “cast doubt on the clear and decisive outcome of this election”.

Trump spokesman Jason Miller, on the other hand, lashed out at the idea of a congressional probe.

“Really clearly, what this is, is an attempt to delegitimize President-elect Trump’s win,” he told reporters earlier in the day. 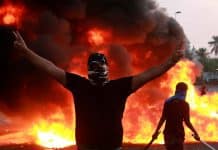 #UNRIG Video (8:41) Riots as Sedition, NSA and OSA as Solution, Restoring Made in America & America the Beautiful

Did MAGA-Trumpster try to kill thousands with exploding tanker truck? (Is Trump the new Bin Laden?)