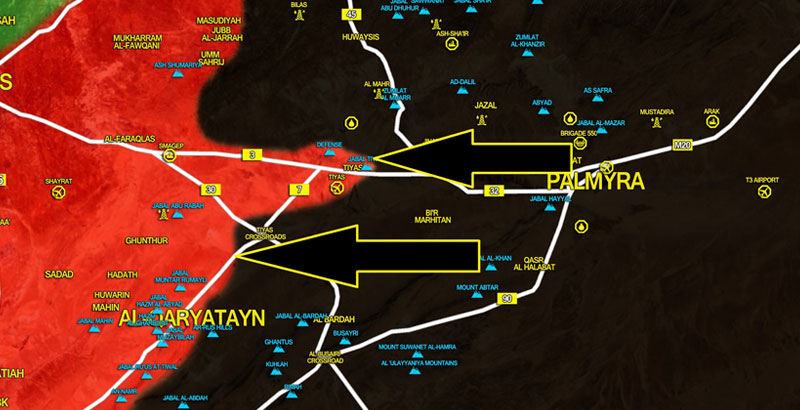 CHRONICLE OF FIGHT IN PALMYRA FROM SERVICEMAN OF SYRIAN ARMY

[ Editor’s Note: This is a soldier’s story, as good as it gets, on what it is like to be on the short end of the stick. Take note of the suicide tank with the ten tons of explosives with the 400-yard blast range. That is a terror weapon — and was effective.

Also note the Tiger Forces people at Palmyra not having been paid in five months, and this is an elite division. I suspect that, because they were in a “quiet” area, they were at the end of the line getting paid. You can see how that could hurt recruitment to the army.

Combined operations did not break down completely. The Russian helicopters blew a hole through to cut off forces and covered their flanks during a fighting retreat, in what will be a night that none of them will ever forget.

Save this, as it may be the last report like this you ever see go public… Jim W. Dean ]

The Suleeman Shahin Facebook page has published a description of the battle in Palmyra, told by Omar Dirmam, a soldier of the Syrian Army, and written by Iyad Al-Hussein. SF presents the translated chronicle of the fighting in Palmyra.

Repeated warnings about the impending attack of Daesh [the Islamic State (IS) terrorist group] came from Russian satellites. An alert about dangerous gathering of terrorists on the city’s perimeter sounded. The air power was carrying out airstrikes on oil fields in the area and did not have time to respond.

The as-Savamiyah military facility and its surroundings, 10 am

The post is located 15 km east of Palmyra on the as-Suhna highway. The defense forces consisted of the Military Security Shield Forces, al-Badia with different units, as-Saima, Zanubiya, Heart of Syria, and units of ash-Sheikh Suleiman – in total, about 1,800 fighters; the 11th and 18th divisions, armed with six 130-mm artillery cannons, six 122-mm artillery cannons, seven Grad multiple rocket launchers, and 12 tanks; the formidable al-Faminiyun legion, consisting of 1,200 fighters and a large number of redoubtable military equipment; about 150 fighters of the Tiger Forces for defense of the weak point in the southeast of the region.

In total, it was enough large army, according to the number of servicemen and military hardware.

So, a movement of two Daesh vehicles and a tank on the as-Suhna road, 7 km from as-Savamiyah, was spotted from the top of the at-Tar hill, where the observation point was located.

The air power carried out airstrikes and destroyed the both vehicles. The tank continued to move. As it turned out, it was loaded with ten tons of explosives, which could defeat in a radius of 400 meters in the case of an explosion.

For unclear reasons, the Konkurs anti-tank gun, which the 18th division had, did not shell the tank. Being approximately 200 meters from the positions, the tank was hit with an assault antitank weapon.

A powerful explosion occurred. A terrible panic started among fighters, survived after the explosion, they started to leave the positions. Then, a quite long lull followed, terrorists were preparing to storm the at-Tar hill.

Fighters started to leave their positions across all the front line without any apparent reasons. The retreat of the al-Faminiyun legion provoked a chain reaction, and the legionnaires did not run in the direction of Palmyra, but abandoned the defense of the city to its fate.

The Military Security Shield Forces and the 18th division followed after them. Unlike them, the 11th division retreated to the city and took up defensive positions on the perimeter of Palmyra. In this way, only the forces of colonel Suheil, defenders of the airport and the air security forces stayed in the south-eastern sector of the defense – in total, about 100 fighters.

The fighters scattered around and set up a temporary line of defense on the sides of the east and south-east.

The at-Tar hill towers over the city of Palmyra. Control over it would mean control of Palmyra and the road, leading to the city. Usually, attacks of Daesh begin with car bomb attacks, then, direct contacts with an enemy follow in order to avoid airstrikes. At-Tar is the most strategically vulnerable defense point; its owner controls the situation.

About 500 members of the Tiger Forces were stationed at its top before the start of the fall of Palmyra. At the first sign of danger, about half of them left the position, explaining their action with the delay in wages for 5 months.

In addition, there were two positions of the 18th division near the top, in the area of the Ras-Antar hill.

The attack on the at-Tar hill began with terrorists’ firing. The firing was conducted from four pickup trucks, equipped with machine guns, which covered the movement of 2 tanks. In addition, 130-mm cannons, as well as 120mm and 92-mm mortars also operated. The ‘hellish cannons’ also shelled the point with gas cylinders with explosives. There were no effective anti-tank weapons, which could stop and destroy the approaching enemy tanks, on the at-Tar point.

Soldiers, deployed in the area of the Ras-Antar hill, also had two tanks, but the terrorists almost immediately brought them out of operation with precise strokes.

In this way, only infantrymen stayed at the defense of the hill, and they directly clashed with the enemy.

The fighters managed to destroy Daesh tanks and terrorists, accompanying them, but it was a hard and long fight. Despite the losses, the defense withstood. The attack lasted up to 17 pm, soldiers lost a few positions. There were many wounded militants, several Daesh members were captured. But the rest of them continued to resist! The 18th division retreated towards the Т-4 airfield.

Anyone, who asks where the air power was, we answer – it is impossible for the air force to operate in such conditions, for this reason, its role was only to carry out air strikes on routes of reinforcement of the terrorists’ units.

Russians blew up the ammunition depots at their base in Palmyra, before to leave it. The sky over the city turned into a festival of fireworks that scared civilians and military in the city. Later, the city was completely evacuated.

The city is empty. There are no people, no military, except a detachment of the state security forces and police. The head of the al-Badia security forces, accompanied by a handful of officers, was always on the move with his armored luxury Cadillac in order to demonstrate his command that he did not leave the city. At the same time, 2,500 fighters of al-Badia and the Military Security Shield Forces were not in Palmyra, nobody of them defended the city.

Only fighters of the 11th division were on the positions among the Tiger Forces, but they were dispersed without a specific place of deployment.

The Tiger Forces came in touch with the leadership, reported the situation and asked for urgent reinforcement. Colonel Suheil ordered to stay and said that help is on the way.

Nobody else of the other forces, which were supposed to protect Palmyra: the 18th division, al-Badia, the al-Faminiyun legion, stayed in the city. Only the Cadillac of Major General Shaulat Hawali, ten his officers and a pickup truck of his guard forces were in Palmyra.

The reinforcements did not arrive.

About 100 fighters of the al-Faminiyun legion and 70 soldiers of the 18th division returned with support. It was not a lot, but it was good.

These forces strengthened the eastern flank of the defense by halves. Two tanks and 40 fighters took up positions on the as-Suhna road.

A mined vehicle with suicide bombers penetrated to the positions of the 11th division from as-Suhna and destroyed tanks of Syrian soldiers. Several defenders were killed. The rest remained in the place. About 60 fighters of the Tiger Forces came to the place to help them. Together, they blocked an access to Al-Ameria neighborhood and the hill, which was empty already during twenty-four hours. Only the area of the warehouses 410 on the Raqqa highway was not covered because there were not enough forces for this.

Contact with the commander. The colonel found out the current situation and explained the situation. The Tiger Forces were grateful to him that he kept in constant touch, encouraging and supporting them.

The sector of the warehouses 410 was empty. There was suspicious silence that caused concern. But it was impossible to do anything. Elementary, there was not enough manpower.

The attack of Daesh began simultaneously on two directions: on the at-Tar hill (south-west) and al-Ameria neighborhood (north, perhaps, even the north-east of the city). At night, a group of terrorists, dressed in military uniforms, entered the neighborhood and suddenly hit us in the back from al-Ameria, occupied by them. Then they were supported from the direction of the warehouses 410. I should say that control over al-Ameria allows to shell all the city. Militants killed everyone, whom they noticed at the streets.

At the same time, four tanks and three pickup trucks of Daesh, equipped with heavy machine guns, attacked the positions of Syrian military in the well-protected at-Tar point. Due to the cold and hunger, the defense was considerably weakened. The help never came, only false promises. However, the defense of at-Tar fell only after almost all the fighters were killed or wounded.

Tel al-Ameria was under Daesh control. They shot at any moving target. Jabal al-Tar is under control of terrorists.

Palmyra is surrounded and completely fell under the Daesh fire.

Remains of the Syrian military were forced to retreat to the southern suburbs and to gain a foothold at the al-Bayarat fork.

All servicemen were withdrawn. About 200 fighters of the Tiger Forces left to cover the retreat. They had two tanks and two machine guns, as well as the luxury car of the Major General. Unfortunately, nothing else. As I have told, we stayed at the al-Bayarat fork.

We are completely surrounded by Daesh. The terrorists also fully control the al-Bayarat highway. There is no place to retreat. Thank God that the General is with us, he finally got in touch with the authorities and sent six Mi-28 helicopters to accompany our retreat through gardens. They successfully covered us with fire from the right and left flanks. We managed to break out of the encirclement. During all the time, two journalists kept in touch with us and recorded the chronicle of the events. They supported us morally and promised that even in the case of our death the truth about the fall of Palmyra will be enlightened for the history.

In this way Palmyra and its surroundings fell.