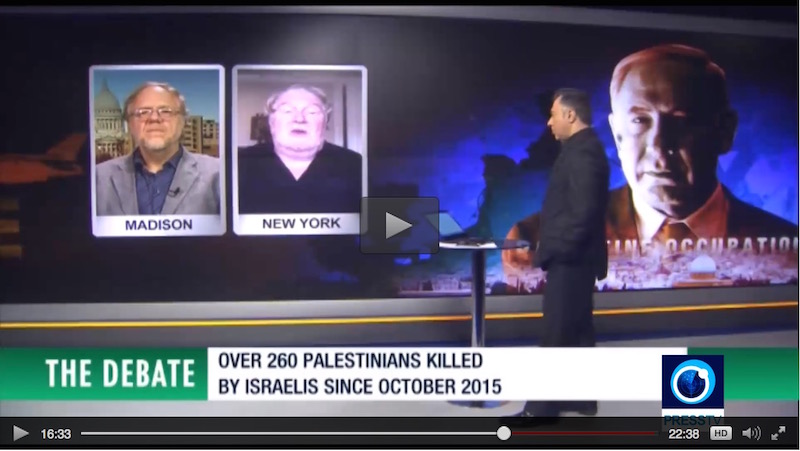 The regime in Tel Aviv is continuing its illegal settlement expansion in the occupied territories despite international calls to stop them. More than half a million Israelis live in over 230 illegal settlement colonies built since Israel’s occupation of the Palestinian territories of the West Bank and East Jerusalem al-Quds. It seems that Israel is taking advantage of the occupation due to the world’s distraction from the issue because of other conflicts in the Middle East.

Press TV has spoken to Kevin Barrett, American scholar and editor of Veterans Today, as well as Ian Williams, senior analyst at Foreign Policy in Focus, to discuss the issue.

Barrett believes the Tel Aviv regime is the biggest force behind the wars in the Middle East, adding that they have been created “consciously” as part of the Oded Yinon Plan which calls for balkanization of Israel’s neighboring countries along ethnic and sectarian lines.

He also stated that the Zionists have created these wars using their massive disproportionate influence in the Western financial structure and in the mainstream media.

“So using these kinds of assets, the Zionists have essentially taken over the West and stirred the West into a civilizational war against Islam and into this war in the Middle East that has busted up all of these countries around Israel and distracted the world from the ongoing crimes of Zionism,” he said.

The analyst also noted the 9/11 incident was a public relations stunt by hardline Zionists in order to launch the war on Islam and the so-called war on terror on behalf of Israel.

Barrett further pointed out that the Israeli control of US political system is the reason why international calls for Israel’s withdrawal to the pre-1967 borders have never been implemented.

He went on to say the there is no more viable two-state solution as Israeli settlers are increasingly “squatting permanently” on Palestinian lands.

According to the analyst, silencing people through laws and conspiracy theories that outlaw criticism of Israel as supposedly being anti-Semitic is an indication that the arguments are probably correct.

Meanwhile, the other panelist on Press TV’s program, Ian Williams, said the Israelis have put a huge amount of effort and money into what they call Hasbara propaganda in order to persuade people that “they are the nice guys” and that Palestinians are terrorists.

The analyst further mentioned that Israel is continuing with its settlement expansions because there are no possible repercussions, arguing that there needs to be serious sanctions.

Williams further criticized the United States for giving military assistance to Israel, arguing the regime should not get aid at all because it has nuclear weapons.

“There is an act of Congress that says that nuclear weapon states that are not declared and are not signatory to the NPT should not get military aid,” he added.

The analyst further asserted that anti-Semitism has increasingly been used by the Israel lobby across Europe and the US as a tactic to pander to political donors.