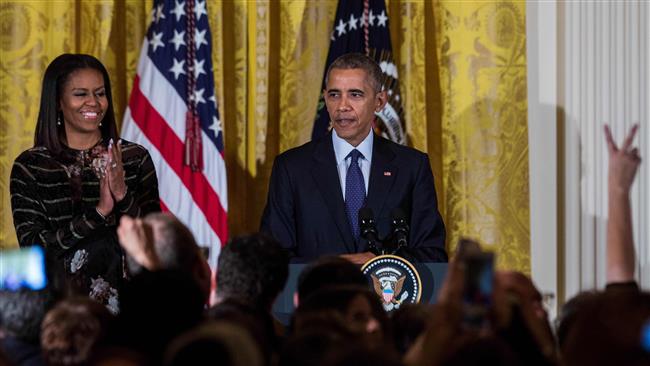 US President Barack Obama has declined to sign a bill renewing existing sanctions against Iran, but allowed the legislation to become law, in an apparent effort to alleviate the Islamic Republic’s concerns that Washington is backtracking on the nuclear agreement.

The US Senate passed a 10-year extension of the Iran Sanctions Act (ISA) on December 1, sending the measure to the White House for Obama to sign into law.

The House of Representatives voted 419 to 1 last month to reauthorize ISA, which was first introduced in 1996 to punish investments in Iran’s energy industry based on accusations that Tehran was pursuing non-civilian objectives in its nuclear energy program.

Under the US Constitution, the president has 10 days after Congress passes legislation to sign it, reject it or do nothing.

The White House had said that the US president was expected to sign the bill into law, but Obama did not approve the measure as the Wednesday midnight deadline passed.

In a statement late on Wednesday, White House Press Secretary Josh Earnest said the president had decided to allow the legislation to become law without his signature.

“The administration has, and continues to use, all of the necessary authorities to waive the relevant sanctions” lifted as part of the nuclear deal between Iran and the 5+1 group of countries, Earnest said.

Iran and the five permanent members of the UN Security Council — the United States, Britain, Russia, China, France as well as Germany – reached a landmark nuclear agreement last year, under which Tehran agreed to limit some aspects of its nuclear program in exchange for the removal of nuclear-related sanctions.

The two sides began implementing the deal, dubbed the Joint Comprehensive Plan of Action (JCPOA), on January 16. However, members of Congress said they wanted ISA to be extended for another decade to send a strong signal that any US president would have the ability to “snap back” sanctions on Iran.

“This administration has made clear that an extension of the Iran Sanctions Act, while unnecessary, is entirely consistent with our commitments in the Joint Comprehensive Plan of Action (JCPOA),” Earnest said.

“Consistent with this longstanding position, the extension of the Iran Sanctions Act is becoming law without the president’s signature,” he added.

“Ensuring the continued implementation of the JCPOA is a top strategic objective for the United States and for our allies and partners around the world,” the Earnest statement said.

Iran had vowed to respond strongly if the sanctions were renewed, saying they violate the nuclear deal between Iran and the 5+1 group.

Iranian President Hassan Rouhani said on Tuesday that Iran had warned that the approval of the ISA would amount to a breach of the nuclear deal.

The Obama administration has expressed reservations about the utility of the legislation, yet American lawmakers argued that renewing the law was critical to maintaining pressure on Iran, claiming that Iran would be unaffected by the renewal, as long as it continues honoring the nuclear deal.

US Secretary of State John Kerry said on Wednesday he had told Iranian Foreign Minister Mohammad Javad Zarif that “to ensure maximum clarity,” the State Department had issued new, redundant waivers exempting Iran from sanctions lifted under the nuclear agreement.

“Extension of the Iran Sanctions Act does not affect in any way the scope of the sanctions relief Iran is receiving under the deal or the ability of companies to do business in Iran consistent with the JCPOA,” Kerry argued.