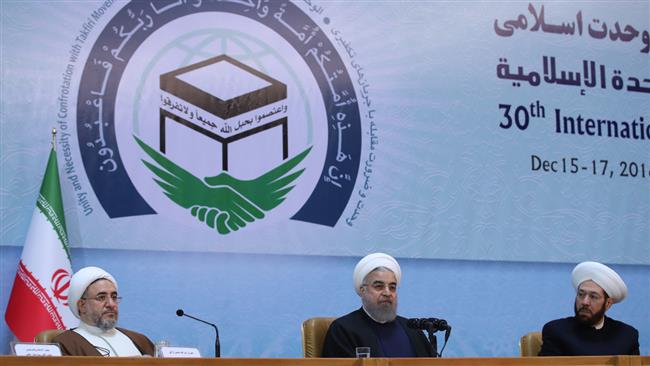 Iranian President Hassan Rouhani has called on all Muslims to unite against the “great conspiracy” of the enemies to destroy Islamic communities through sectarian wars.

Rouhani addressed scores of thinkers from around the world at an international Islamic unity conference in Tehran on Thursday, saying that the ongoing bloodletting in Muslim countries is being orchestrated by major powers and the Zionists.

“The aim of the enemies is to create hopelessness and destroy the opportunities of the Muslim communities,” the president said as he touched on some of the atrocities unfolding in Iraq and elsewhere.

“Big powers set up streams of blood in the streets of Mosul and destroyed this beautiful city. They took away sleep from Muslims and enslaved Muslim and Christian girls who were under the banner of a single government,” he said.

Rouhani said Western powers and their regional allies are responsible for the destruction of cities and beheading of Muslim youths.

“First and foremost, the sin related to these crimes befalls on big colonialists, Western powers and occupiers of the region which opened the way to terrorist groups, armed them and bought smuggled oil from them, allowing looted works from destroyed museums to be sold in their markets.

“The second culprits are some of the Muslim countries which gave money and weapons to terrorist groups,” Rouhani said.

The president called on Muslim thinkers to invite the youths to the true message of Islam and exhort them to follow the path of divine messengers, culminating in the teachings of Prophet Muhammad.

“We must not allow the enemies of Islam to take away this capacity from us and destroy it or increase division and schism under various pretexts.”

Rouhani touched on centuries-old coexistence between Shia and Sunni Muslims as well as other religious and ethnic groups, when “we used to respect one another and refrained from insulting our religious luminaries.”

The president described Shia and Sunni Muslims as brothers in faith and following of the Qur’an and the traditions of the great prophet of Islam.

“Shia crescent or Sunni crescent, both are wrong. It is not Shia or Sunni which are squared up against each other. As the late Imam (Khomeini) said it is rather the American Islam standing against the genuine Muhammadan Islam.”

Rouhani touched on the principle of Jihad in Islam, citing precedents when it was used by Muslims to achieve independence from colonialists by the Libyans, Iranians, Iraqis and other nations.

“We must take pride in a Jihad which is in line with the judgment of the Holy Qur’an. We know of no Jihad other than the one standing against tyranny and defending the dignity of Islam and Muslims,” he added.

Rouhani held hope that Muslims would unite by clinging to the teachings of Prophet Muhammad and identify the “Zionist regime” of Israel as their “biggest enemy”, when Yemen would achieve liberation and those who are aiding terrorists with money and arms would face the Islamic Ummah with shame.

“Let’s come the day when we are a united Ummah, relying on Allah instead of America, England and other big powers as well as terrorists.”

The 30th International Islamic Unity Conference which opened in the Iranian capital with the participation of hundreds of domestic and foreign guests, prominent scholars and religious figures from various Muslims countries will continue until Saturday.