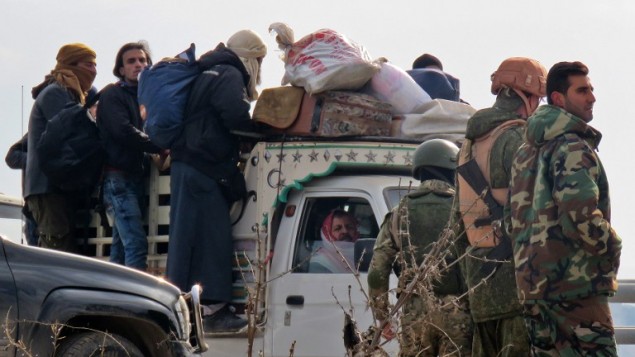 Syrians are evacuated from a rebel-held area of Aleppo on December 16, 2016. (AFP Photo)

Times of Israel/ALEPPO, Syria — The Syrian government suspended evacuations from eastern Aleppo just hours after they resumed on Friday, saying that rebels had opened fire on a convoy of evacuees at a crossing point with the enclave, state TV reported.

e southern Aleppo neighborhood of Ramussa, a government-held area that evacuees were passing through. Buses and ambulances that had been waiting there to evacuate more people left the area after the gunfire and explosions, the AFP correspondent said.

It wasn’t immediately clear how long the suspension would last or whether it would delay the ceasefire deal under which tens of thousands of residents and rebel fighters are being evacuated to opposition-controlled areas in the surrounding countryside, a process likely to take several days.

Earlier Friday, as the evacuations resumed for a second day, Russian President Vladimir Putin announced a major new Syria peace initiative, saying he and his Turkish counterpart are working to set up peace talks between Damascus and the opposition in Kazakhstan.

Syrians wait to leave Aleppo as buses evacuate opposition fighters and their families from rebel-held neighborhoods of the embattled city on December 15, 2016. (AFP)

The evacuations seal the end of the Syrian rebels’ most important stronghold — the eastern part of the city of Aleppo — and mark a watershed moment in the country’s civil war, now in its sixth year.

In announcing the suspensions, the Syrian TV also claimed that the rebels had tried to take with them captives they had seized and were holding in the rebel enclave during bitter battles to defend their territory from a ferocious, weeks-long onslaught by Syrian President Bashar Assad’s troops.

Hezbollah’s TV station Al-Manar said the Syrian army stopped the evacuation process because the rebels had violated the ceasefire deal. Members of the Lebanon-based terror group are fighting in the Syrian conflict alongside Assad’s forces.

Speaking on a visit to Japan, Putin said that the negotiations would take place in Astana, the capital of Kazakhstan, and that he and Turkish President Recep Tayyip Erdogan are also working for an overall truce in Syria. Putin said Ankara had helped broker the rebel exit from Aleppo that is currently underway.

However, the Western-backed Syrian opposition is unlikely to accept the location Putin had proposed for the negotiations.

On Friday morning, dozens of green public buses and ambulances were parked in Ramussa to evacuate more people from eastern Aleppo. Syrian state TV showed a truck with dozens of men, driving through the corridor leading the rebel-held parts of the surrounding provinces.

Staff from the International Red Cross and from the Syrian Red Crescent wait as civilians and fighters are evacuated from Aleppo towards rebel-held territory on December 16, 2016. (AFP)

The TV said that since the early hours of the day, four convoys have left Aleppo. It said some of the evacuees were using their own vehicles to leave.

The International Committee of the Red Cross said about 4,000 civilians were taken out on Thursday. Syrian state news agency says 2,300 opposition fighters and their families left Aleppo the previous night. The Syrian Observatory for Human Rights, a Britain-based monitor, said around 8,500 people had left the city. Russia, a key Assad ally, said more than 6,462 people, including over 3,000 rebels and 301 wounded, have been taken out.

The army began an operation to recapture all of Aleppo in mid-November, and had overrun more than 90 percent of the former rebel bastion in the east of the city before the evacuation began.

For the opposition, the evacuation was a humiliating defeat. A smiling Assad called it an historic event comparable to the birth of Christ and the revelation of the Quran.

The Lebanon-based pan-Arab TV stations Al-Mayadeen interviewed an official with the Syrian Arab Red Crescent in the central province of Hama who said that buses and ambulances are waiting to evacuate thousands of people two Shiite villages besieged by rebels — a last-minute condition that became part of the ceasefire deal for Aleppo.

A man holds a Syrian flag bearing the portrait of President Bashar Assad as residents in a government-held area of Aleppo gather in the street during an evacuation of rebel fighters and their families on December 15, 2016. (AFP/George Ourfalian)

The SARC official said they will likely begin the evacuation of 15,000 people from Foua and Kefraya adding that the priority will be for the wounded, elderly people, women, children and those with chronic illnesses.

State TV said 110 buses and 19 medical teams were being ready to take those being evacuated from the two Shiite villages. Iran had demanded to tie the evacuations from Foua and Kefraya with the one from Aleppo.