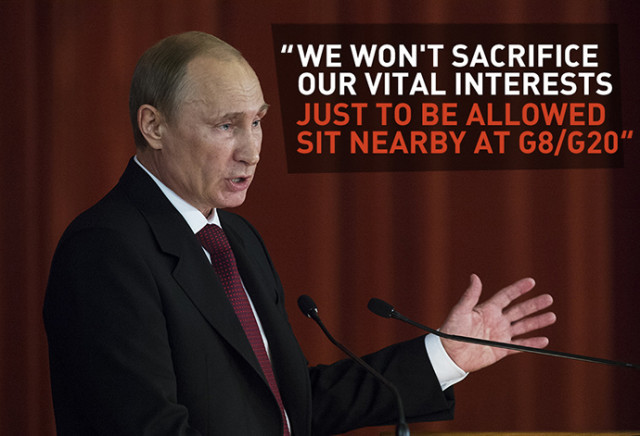 They probably knew the dark history of “international Zionism,” which the Ayatollah Khomeini called the “Great Satan.”[1] They seemed to have known that the “Great Satan” “exploits the oppressed people of the world by means of the large-scale propaganda campaigns that are coordinated for it by international Zionism.”[2] They seemed to have been cognizant of the fact that the “Great Satan” “sucks the blood of the defenseless people as if it alone, together with its satellites, had the right to live in this world.”[3]

So Russia, Iran and Assad had to collaborate in order to defeat this existential threat. Moreover, this “Great Satan” destroyed the Russian economy in the 1990s, leaving the average Russian to starve to death. This “Great Satan” overthrew a democratically elected official in Iran in 1953, leaving the nation in chaos.[4]

In that sense, NWO agents have to invent new lies and fabrications. They have no choice but the fight back through deceptions and covert means. They have been able to spread the idea that Russia hacked the Democratic National Committee. What’s the evidence?

Well, no one has ever been able to provide it. U.S. officials, including Obama, keep citing “Intelligence assessments,”[5] but that’s all we’ve seen so far. But let us again grant New World Order agents the idea that Russia did hack into the DNC.

Do NWO agents mean to tell us that this is really big news to them? Who ordered a wave of cyberattacks against Iran in 2012? Who hacked into Iran’s computers and destroyed them via a virus known as Stuxnet?[6] Who was assassinating Iranian scientists in 2012 and beyond?[7]

You see, the New World Order ideology is again melting in the heat of its own contradiction. NWO agents want to control virtually every country around the world, but they don’t want to be controlled by any country. Moreover, they want to violate the moral and political order while at the same time expect to live happily ever after.

Well, Russia, Iran and Assad are basically saying that it ain’t gonna happen. That is one reason why Vladimir Putin continues to make NWO agents bleed morally and politically.