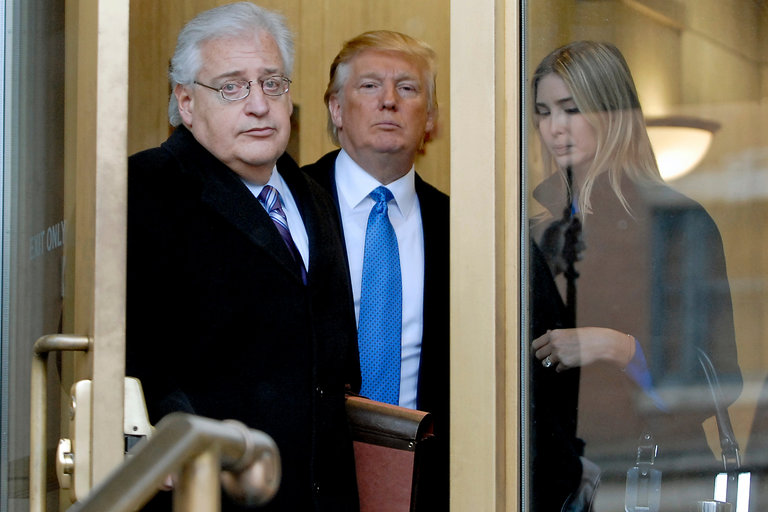 The New York Times has warned against President-elect Donald Trump’s choice of David Friedman as the next US ambassador to Israel, calling the move “dangerous.”

Trump’s “chosen representative would be far more likely to provoke conflict in Israel and the occupied territories, heighten regional tensions and undermine American leadership,” the newspaper warned in an editorial published Saturday.

Meanwhile, an op-ed in the paper written by former US ambassador to Israel Daniel Kurtzer called the decision “a serious mistake” that could be “hazardous to peace.”

Friedman, 57, an Orthodox Jew and a Hebrew speaker, has been an outspoken and active supporter of the settlement movement, and has argued that Israel doesn’t face a “demographic threat” to its Jewish character if it fails to separate from the Palestinians. In addition to being a bankruptcy lawyer in New York, Friedman serves as president of American Friends of Bet El Institutions, an organization that supports a large West Bank settlement just outside Ramallah.

“Mr. Friedman, a bankruptcy lawyer who has represented the president-elect in matters involving Atlantic City casinos, has no diplomatic experience, unlike nearly every American ambassador who has served in this most sensitive of posts. That might not be quite so alarming if he didn’t also hold extremist views that are radically at odds with American policy and with the views of most Americans,” The New York Times cautioned.

Friedman, the paper noted, “has doubted the need for a two-state solution… has endorsed continued Israeli settlement of occupied territory in the West Bank… (and) has gone so far as to endorse even the annexation of some of that land, where Palestinians hope to build a state of their own.”

It also warned that Friedman — who has said he will refuse to meet with the liberal Jewish group J Street, saying their supporters were “far worse” than Nazi-collaborating Jews — would be “effectively ostracizing a significant part of the (American Jewish) community.”

Right-wing and settler groups have welcomed Friedman’s appointment and Prime Minister Benjamin Netanyahu is reportedly pleased with the move. Palestinian officials, on the other hand, expressed concern at the hardliner’s nomination for the post.

Since 1967, official US policy — during both Republican and Democratic administrations — has opposed Israeli construction in areas that the Palestinians claim for their future state.

President Barack Obama, like the liberal pro-Israel community in the US, maintains that settlement expansion hobbles the prospect of a comprehensive two-state deal with the Palestinians, and that a failure to reach such an outcome would jeopardize Israel’s future as a Jewish and democratic state.

Kurtzer, an Orthodox Jew who served as ambassador to Israel under President George W. Bush, also railed against the appointment, noting it was almost unheard of to appoint someone with no diplomatic experience to such a sensitive post.

“This call to withdraw Mr. Friedman’s name also reflects a sober assessment of the damage that could be caused to American interests and to Mr. Trump’s presidency by the reckless words for which Mr. Friedman is already known,” Kurtzer wrote.

Kurtzer, who was also US ambassador to Egypt, warned against moving the US embassy to Jerusalem, something both Trump and Friedman have said they would do, saying it would “inspire riots across the Islamic world.”

“Every action by the American ambassador to Israel is monitored closely and every word spoken by him dissected for hidden meaning,” said Kurzer, who served in Tel Aviv from 2001-2005.

“Mr. Trump’s predecessors always chose a representative in Tel Aviv who could possibly advance our interests or at least not hurt them by wild comments and inappropriate actions. Mr. Trump would be wise to follow the tradition of appointing an experienced professional as our ambassador to Israel. Mr. Friedman is not that person.”

The Times editorial made a plea to the Senate to stop the appointment.

“Like any president-elect, Mr. Trump is within his rights to nominate whomever he pleases,” the paper said. “But with his choice of Mr. Friedman, he has displayed a dangerous ignorance of or indifference to the land mines across the Middle East. The Senate has the responsibility to protect Mr. Trump and the country from taking this reckless step.”