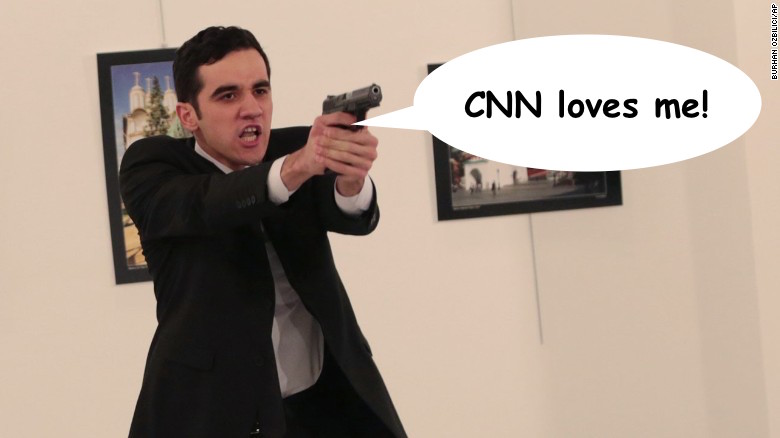 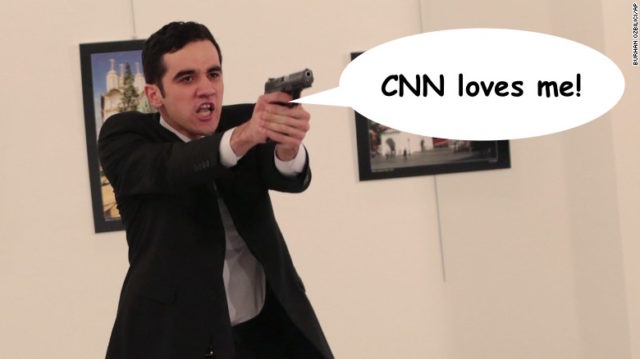 Mainstream media tell part of the truth and hide the rest. But the hidden part sometimes slips out between the lines.

Such is the case with CNN’s initial report on the murder of Russian Ambassador Andrey Karlov in Ankara, Turkey. Let’s break down the first three paragraphs:

“A police officer assassinated Russia’s ambassador to Turkey at an art exhibition in Ankara on Monday, officials said. The gunman shouted ‘Do not forget Aleppo!’ as he opened fire.

“The shooting of Ambassador Andrey Karlov was captured on video. Russia’s foreign ministry described it as a ‘terror attack.’

“Russia has been instrumental in helping Syrian President Bashar al-Assad’s regime in its push to retake the eastern sector of Aleppo, which had been held by rebels for nearly four years.”

If an American or Israeli ambassador were gunned down at an art opening somewhere, anywhere, CNN wouldn’t write it up this way. “A police officer assassinated Russia’s ambassador” would probably be rephrased as “A terrorist assassinated America’s (Israel’s) ambassador.”  Instead of “the gunman shouted, do not forget Gaza!” it would be “the jihadi terrorist shouted  ‘Allahu akbar!”

CNN and the rest of the mainstream media have been crying oceans of crocodile tears for the suffering people of Aleppo. By choosing to quote the gunman as shouting “do not forget Aleppo” when in fact he also shouted “Allahu akbar,” CNN is casting the “gunman” (not “the terrorist”) in a relatively sympathetic light.

CNN then disapprovingly puts the pejorative label “terrorist” in the mouth of “Russia’s foreign ministry,” an entity that the mainstream media has been relentlessly bashing. The terrorist’s motive – avenging Aleppo, which the MSM has been mythologizing as another Guernica or Sarajevo – is spelled out in remarkably non-judgmental terms.

Why would CNN be giving the assassin of a diplomat such sympathetic coverage? Could America’s biggest news network be in bed with the terrorists?

Of course it could.

Terror events are staged for one reason and one reason only: To garner media coverage. The only folks who can be absolutely sure that a terror event will get the kind of coverage they want are the people who run  the mainstream media. So all really big terror events – the ones that make a massive media splash – should be assumed to have been perpetrated by the same forces that dominate the MSM.

As I wrote in my edited book Orlando False Flag:

“Meanwhile in Europe, the other principle bastion of what passes for Western civilization, back-to-back anti-Islam false flags in Nice, France and Munich, Germany were both recorded and propagandized by the same Israeli-Mossad-linked photographer. Richard Gutjahr, a cameraman whose wife Einat Wilf is a leading Israeli operator, was pre-positioned on a balcony in Nice to film the beginning of the July 14, 2016 truck attack. Gutjahr’s iconic footage was heavily promoted in the global media; no mainstream journalists bothered to ask why Gutjahr happened to be on that balcony and for no discernable reason began to film what must have appeared to be an ordinary truck before it had begun to mow people down.

“Then on July 22, Gutjahr was apparently once again in the right place at the right time, photographing the Munich, Germany shopping mall shooting and posting the images to his Twitter account—then taking down the images, which simultaneously disappeared from a Russia Today report, just minutes after being exposed in a Veterans Today article by this author.

“Gutjahr’s wife Einat Wilf is a former Israeli Intelligence Officer in Unit 8200 who served as foreign policy advisor to Shimon Peres. She is a strategic consultant to MacKenzie and Co. in New York, and a general partner in Core Venture Capital in Israel. In 2007 she ran for the presidency of the World Jewish Congress. The claim that such a person’s spouse’s apparent foreknowledge of two back-to-back terror attacks can be accounted for by coincidence would boggle the mind of the craziest coincidence theorist.

“Gutjahr is hardly the only apparent Israeli agent pre-positioned to crank out anti-Islam propaganda in the wake of spectacular terror events. On September 11th, 2001, former Israeli Prime Minister Ehud Barak, who had stepped down in March 2001 and come to America “to oversee the terror attacks of 9/11” in the words of journalist Christopher Bollyn, was in the BBC Studios in London just minutes after news of the airliner crashes broke, purveying what became the official story and calling for US invasions of Afghanistan and Iraq. Like Gutjahr on the balcony in Nice, Barak can hardly have found himself in the BBC studios at that moment, fully prepared with the official conspiracy theory and details about upcoming wars, by coincidence.”

CNN was seized by the usual Zio/NATO  suspects (specifically, Time-Warner) from the last major independent-minded goy in MSM,  Ted Turner, in 1996. No question about whose interests they represent.

So why would Israel and its US/NATO assets want to kill the Russian Ambassador to Turkey, and then shower media sympathy on  the assassin?

All-too-obvious answer (already offered by Putin and seconded by Erdogan): They’re trying to torpedo the Russian-Turkish-Iranian peace process, from which the Zionist-dominated warmongering West has been excluded. It’s a last-ditch effort to prevent peace from breaking out in Syria.

Unlike some of my VT colleagues, I would not be too quick to pin the blame on Erdogan. While it’s always possible that the Turkish President let a Gulenist (FETO) stooge do the dirty deed as a false flag pretext to crack down even  further on that outlawed movement, it’s even more likely that the Gulenists themselves, catspaws of the Zio-NATO Gladio network, did it to punish Erdogan and blow up Ankara’s thaw with Moscow and Tehran.

The overriding Zio-NATO strategic imperative is to prevent all forms of rapprochement between the major Eurasian continental powers. Russia, Turkey and Iran banding together and helping Syria solve its problems – now that is the ultimate Rimland geostrategist’s nightmare. And it’s an even nastier nightmare for the hardline Zionists, who will pull out all the stops before they allow peace and stability to break out in the Middle East.

The takeaway: CNN can help you figure out what’s really going on in the world. You just need to  deconstruct their spin, follow the money, and ask the perpetual million-dollar-question: