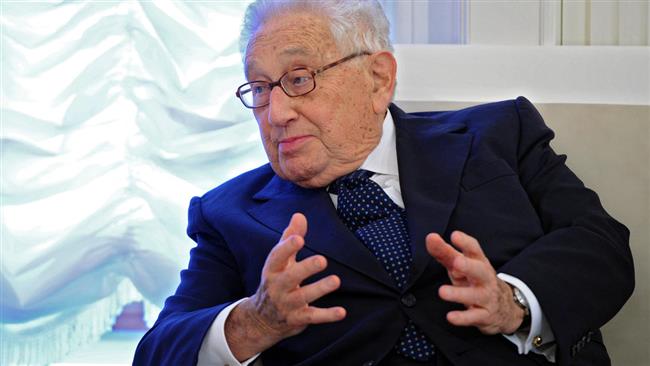 [ Editor’s Note: This is a very strange interview by Kissinger, but not for the usual fawning media platform. On the one hand, he is obviously boosting Trump’s “greatness”, but doing so in the usual, weaselly-word Kissinger fashion, so he can deny that’s what he meant later. We have all been here before with Henry and his doublespeak with glassy-eyed MSM interviewers.

Obama was a “shock” coming into office, but Henry had no comment then, even when he beat Hillary. The Nobel people thought he was so phenomenal that they gave him the Peace Prize — literally gave it to him in affirmative action mode. Obama then went on to “extraordinarily” become the New Cold War president, absent his impressive work in putting the Iran nuclear weapons hoax to bed.

But Obama seems to have done that to shift US military power away from the Mideast to support the new containment move on Russia and China, when the only threat they evidenced was building strong trade economies.

We saw the EU, which had a $110-billion trade surplus with Russia actually put sanctions on Moscow for not going along with a NATO coup in Ukraine, which would have taken over Russia’s Black Sea strategic base and access to the Mediterranean. This was historically Russian territory until Nikita Khrushchev “gave it” to his native Ukraine.

Gosh, silly me, I thought that using proxy terrorism as the new regime-change tool qualified for “getting involved”, as did the NATO military push to Russia’s border, breaking agreements not to do that, and then his “Asia Pivot”.

Dear Henry, I look forward to the day when you say something really remarkable, versus your aged diplomatic doublespeak.

Yes, I know it works for you, as even Putin loves it, but I fear he does so mainly for the style and not the content… Jim W. Dean ]

Henry Kissinger, the former US secretary of state and national security advisor, has said President-elect Donald Trump could accomplish “something remarkable” in American foreign policy, calling the Republican president-elect “a phenomenon.”

“Donald Trump is a phenomenon that foreign countries haven’t seen. So, it is a shocking experience to them that he came into office. At the same time, extraordinary opportunity,” Kissinger said in an interview broadcast on Sunday on CBS News.

“And I believe he has the possibility of going down in history as a very considerable president because every country now has two things to consider,” he said.

“One, their perception that the previous president, or the outgoing president, basically withdrew America from international politics so they had to make their own assessment of the necessities,” he added.

“And secondly, he is a new president who is asking a lot of unfamiliar questions and because of the combination of the partial vacuum and the new questions one can imagine that something remarkable and new emerges out of it,” said Kissinger, who served under two Republican presidents, Richard Nixon and Gerald Ford.

“I’m not saying it will, I’m saying it’s an extraordinary opportunity,” explained Kissinger, a proponent of Realpolitik, who played a prominent role in United States foreign policy between 1969 and 1977.

Trump’s foreign policy rhetoric during the 2016 presidential campaign made many US allies from Europe to Asia concerned about their future relations with Washington.

Trump called NATO an “obsolete” alliance and raised doubts over whether the US under his command would assist a NATO ally under attack.

He also suggested that Japan and South Korea should obtain nuclear weapons to boost their ability in deterring regional rivals like North Korea.

In an interview last week, Kissinger pointed out a number of challenges that may lead to conflicts during Trump’s presidency, specifically the growing tensions between the US and China and the breakdown of relations between Russia and the West.

The veteran diplomat said the US leadership has always been influential in shaping the world order and expressed hope that Washington will continue to maintain that tradition.

Trump and Kissinger met at least twice this year; once during the presidential campaign in May and the second time after the Republican’s victory in the November 8 election.