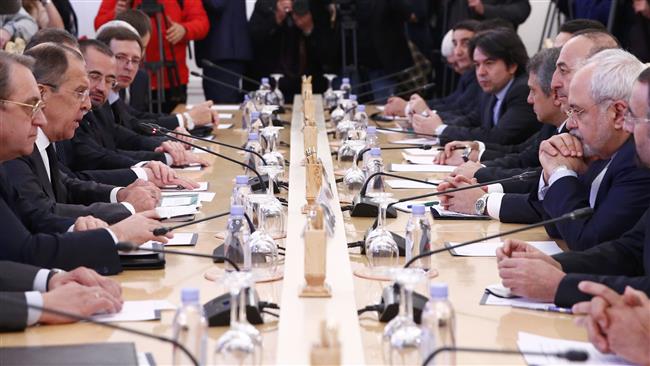 [ Editor’s Note: As VT predicted, the freeing of Aleppo was quickly followed by a call to renew negotiations, as this move would kill the expected smear claims that Damascus was seeking a military solution. The meetings being reported on today had to be in the planning for some time. The big change is that it is just a three-way discussion going on.

The Western and Gulf terror sponsors and Israelis are in the bleachers on this one — a tidal shift away from their obstructionist policies. Does this mean Turkey is making a shift, or playing both sides against the middle? It has now officially recognized the sovereignty of Syria, which should include Turkey not permanently occupying northern Syria. Iraq is watching all this closely.

The respective defense ministers were also meeting, so their complicated military planning and logistics were being developed parallel to the political logistics. As I had suggested early on when the Saudi High Negotiating Committee (HNC) was signaling that it would obstruct the talks with preconditions, this new joint statement seems focused on squeezing obstructionists out of the process.

We will see what spin Kerry and Ash Carter put on it, particularly with their being left out of the organizing stage… Jim W. Dean ]

The Iranian foreign minister was speaking at a meeting with his Russian and Turkish counterparts Sergei Lavrov and Mevlut Cavusoglu, respectively, and members of the three countries’ delegations, which had gathered in the Russian capital to discuss the latest developments in Syria, particularly those concerning the newly liberated strategic city of Aleppo.

He expressed hope that a ceasefire agreement could be reached in Syria, saying that now is a good time for the resumption of negotiations to find a political solution to the crisis in the country.

At the end of their trilateral meeting, the foreign ministers of Iran, Russia and Turkey issued a joint statement on agreed steps to revitalize the political process to end the Syria crisis.

Zarif, Lavrov and Cavusoglu agreed on the following topics:

1. Iran, Russia and Turkey reiterate their full respect for the sovereignty, independence, unity and territorial integrity of the Syrian Arab Republic as a multi-ethnic, multi-religious, non-sectarian, democratic and secular state.

2. Iran, Russia and Turkey are convinced that there is no military solution to the Syrian conflict. They recognize the essential role of the United Nations in the efforts to resolve this crisis in accordance with UN Security Council resolution 2254.

The ministers also take note of the decisions made by the International Syria Support Croup (ISSG) and urge all members of the international community to cooperate in good faith in order to remove the obstacles on the way to implement the agreements contained in these documents.

3. Iran, Russia and Turkey welcome joint efforts in eastern Aleppo allowing for voluntary evacuation of civilians and organized departure of the armed opposition.

The ministers also welcome the partial evacuation of civilians from Foua, Kefraya, Zabadani and Madaya and commit to ensure the completion of the process without any interruption and in a safe and secure manner.

They express their gratitude to the representatives of the International Committee of the Red Cross (ICRC) and the World Health Organization (WHO) for their assistance in the conduction of the evacuation.

4. The Iranian, Russian and Turkish ministers agree on the importance of expanding ceasefire, unhindered humanitarian assistance and free movement of civilians throughout the country.

5. Iran, Russia and Turkey express their readiness to facilitate and become the guarantors of the prospective agreement being negotiated between the Syrian government and the opposition. They invite all other countries with the influence on the situation on the ground to do the same.

6. They strongly believe that this agreement will be instrumental to create the necessary momentum for the resumption of the political process in Syria in accordance with the Security Council resolution 2254.

7. Zarif, Lavrov and Cavusoglu take note of the kind offer of the president of Kazakhstan to host relevant meetings in Astana.

8. Iran, Russia and Turkey reiterate their determination to fight jointly against Daesh and al-Nusra terrorists and to separate them from armed opposition groups.

In a meeting with his Iranian counterpart in Moscow on Tuesday, Lavrov stressed the importance of fighting terrorism in an “uncompromising and merciless” way.

He pointed to the assassination of Russia’s Ambassador to Turkey Andrey Karlov in a gun attack in Ankara and said, “We feel that this barbaric crime is a fresh reminder the war on terrorism must be uncompromising and merciless.”

Karlov was shot dead while delivering a speech on the opening of a photo exhibition on Monday.

The Russian minister rejected as “absolutely unacceptable” the attempts to connect terrorist attacks to his country’s support for Syria in its fight against terrorism and said such moves are aimed at shielding the militants.

“This is a provocative, perverse and unacceptable logic, these people are trying to protect terrorists and stop the fight against them,” Lavrov said and added that the efforts to make the world believe that supporting the legitimate Syrian government would increase the threat of terrorism “are absolutely unacceptable.”

During the meeting, Zarif expressed his condolences to the Russian government and nation as well as the family of the assassinated diplomat.

“Terrorists recognize no location and no geography and it is necessary that all [countries in] the world fight against terrorist groups,” the Iranian minister said.

Zarif said the Iranian government and nation are standing by Russia in the battle against terrorists and see no justification for acts of terror, adding that all countries must come to the conclusion that terrorists are not useful “even for short-term purposes.”

Those countries, which are sponsoring terrorism, must realize the “catastrophic dimensions” of their support for terrorist groups, Zarif noted. Ahead of their talks in Moscow, the Iranian and Russian foreign ministers paid tribute to the murdered Russian ambassador to Ankara.

The assassination, condemned by the Turkish and Russian leaders as an attempt to sour the bilateral ties, came as the countries are cooperating over the Syrian crisis.

Turkey is partaking in talks on behalf of anti-Damascus militants, who had been in control of the eastern part of the city until recently. Russia has been supporting the Syrian government and has been negotiating on its behalf. Iran, the US, NATO, and other countries and world institutions have also condemned the assassination of the Russian ambassador.

Meanwhile, Iranian Defense Minister Brigadier General Hossein Dehqan held talks with his Russian and Turkish counterparts, Sergei Shoigu and Fikri Isik, respectively, in Moscow on Tuesday about the latest developments in the region and the situation on the ground in Syria, especially in Aleppo.

During the meeting, the Iranian defense minister praised military cooperation between Ankara and Moscow in Syria.