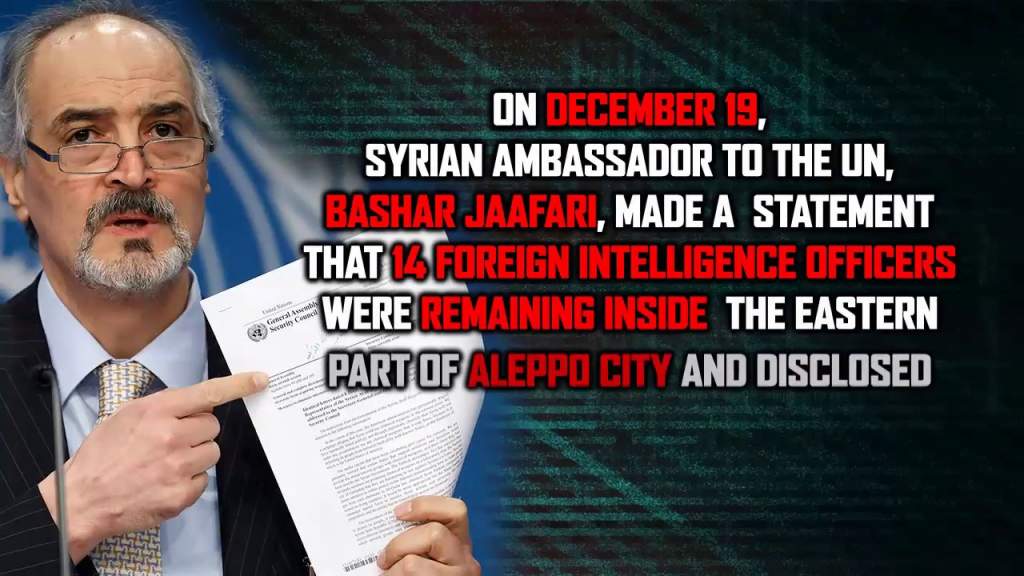 [ Editor’s Note: When I did my Debate Show yesterday at the studio, they caught me flatfooted about the Syrian Ambassador confirming the story of the 14 US coalition Intel officers in Aleppo, but not about the original story that they had been captured.

We may never know if the capture story was true or a psyop to sweat those trying to get them back. Our report from our own sources of a much larger number that appears to have gotten out, especially the large number of Turkish ones, which might have been key in getting Erdogan on board the three-way peace talks held today, with its strong closing statement… Jim W. Dean ]

On December 19, Syrian ambassador to the UN, Bashar Jaafari, made a statement that 14 foreign intelligence officers were remaining inside the eastern part of Aleppo city and disclosed their alleged names and nationalities.

Jaafari said that the goal of the UN resolution on Aleppo is to allow these foreign officers to get a safe passage from this area. Last weekend, the same names appeared in reports, claiming that the Syrian Special Forces captured 14 foreign intelligence officers in Aleppo.

If true, this could lead to major diplomatic setbacks of the US-led block over the Syrian crisis. The international community cannot ingore facts of a direct support provided by some countries to terrorists in Syria.

There are also reports that the real numbers are much higher than just 14 (Veterans Today Dec.17):

“We have some confirmation on this from our own Syrian sources. The numbers are much higher than just the 14 names released by the Syrian MP via Facebook. That report of 14 officers might be a different group, as it had specific names.

My report has only the numbers and nationalities…and the news that they were not really “captured” but were allowed out as part of a deal between all parties involved. You see the Moroccans are missing in these numbers.

The list of 14 names leaked by a Syrian MP are not the real names of those officers, they are cover names; it is standard practice to use a fake ID when serving in a secret op. This is a leak that MSM is ignoring, as they have about all stories of captured foreign officers in Syria. But then Syria has been quiet, also.

From what we can see so far, getting these foreign officers out was rolled into the ceasefire/evacuation deal to get the jihadis out in order to prevent further Syrian casualties and more damage; furthermore, Syria and Russia just wanted to get it over with. The Russians have already moved for a full and immediate ceasefire and the start of all-party political talks.

Russia is determined to get all the involved parties to the table and get those talks going, therefore they were not going to let the capture of some officers screw things up. We will see what the reaction is to getting the talks going. After that we will be watching closely to see if TOW and MANPAD missiles show up on the battlefield soon as part of a new terrorist offensive.”