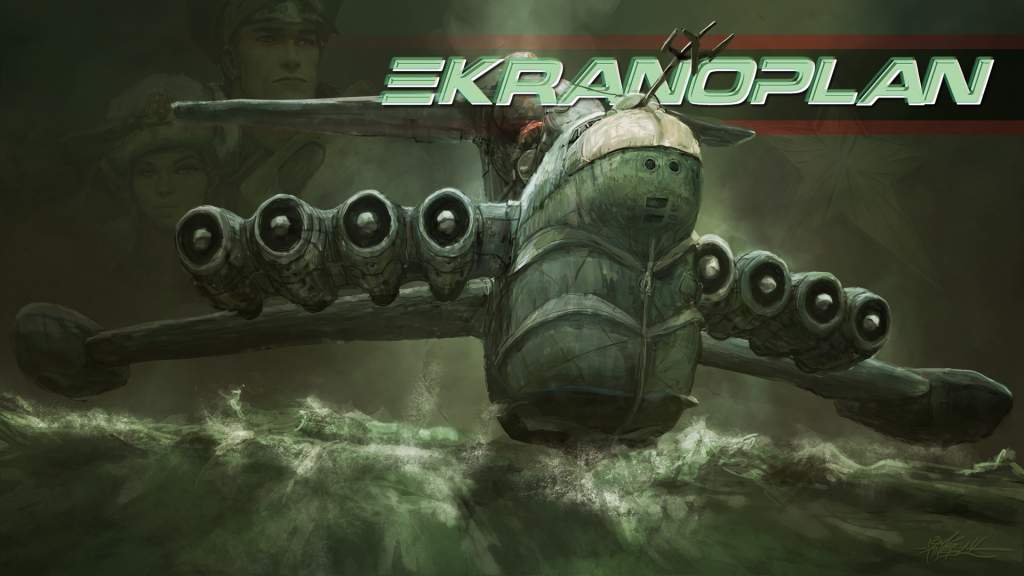 The role of maritime theater of operations has significantly increased. But to create a traditional fleet of aircraft carriers, cruisers and destroyers, capable of competing on an even level with the strongest fleet today, the US Navy, is extremely complicated. For this reason, the maritime powers are looking for asymmetrical approaches in the construction of the fleet of the future.

An interesting asymmetrical solution is presented by the Ekranoplan.

Ekranoplan is a high-speed transport vehicle flying within the limits of the aerodynamic envelope, at a relatively low altitude (a few metres) above water, ground, snow or ice. The ekranoplan is much smaller than an aeroplane with comparable mass and wing area. According to the International Maritime Organisation (IMO) classification it is considered a sea-going vessel.

(A ground effect vehicle (GEV) is a vehicle that is designed to attain sustained flight over a level surface (usually over the sea), by making use of ground effect, the aerodynamic interaction between the wings and the surface. Among the best known are the Soviet ekranoplans, but names like wing-in-ground-effect (WIG), flarecraft, sea skimmer, or wing-in-surface-effect ship (WISE) are also used.)

Experts consider it entirely possible within the next 5 to 10 years we’ll see the appearance of heavy military ships from 500 to 5000 tonnes of displacement.

The Project 903 Ekranoplan was designed for combat against surface ships using missile strikes under conditions of friendly air superiority. The main targets of the missile carrier are aircraft carriers. The ekranoplan “Lun”, thanks to its high speed and radar stealth, can approach aircraft carriers to within effective missile range.

Today, the ekranoplans are produced with a displacement of up to three thousand tonnes, though craft betwenn 1500 to 2000 tonnes are typical, and both the engineering and technological issues have been resolved. Such displacement will allow the installation of various weapons and hardening of the airframe, including by armouring important components. It will also allow the installation of a power plant giving the ekranoplan cruising speeds of 400 km per hour, and maximum speed of 500 km/hr, with fuel reserves ensuring range of 5000 to 7000 miles. Current airplanes, weighing 200-300 tonnes can fly without refuelling 10,000 to 12,000 kilometres.

The main reason for the interest in the ekranoplan is its incomparably higher speed than that of naval ships’. This provides an opportunity for operational and tactical group manoeuvres in terms of approaching similar levels of aircraft. Thus the ekranoplans are invulnerable to current anti-ship missiles which can only engage slow-moving targets. They may be engaged by air-to-air missiles, though the ekranoplan’s ability to alight on the water limits their effectiveness.

When comparing with traditional aircraft, the advantages of the ekranoplans, in the cruise control mode at extremely low altitudes over the entire route and with the ability to alight on the water with minimal fuel usage, allows to significantly increase the on-station time and the weapons load. An important advantage is the prolonged endurance, potentially reaching several days.

The weaknesses of the ekranoplans include the limits of weaponry that can be used, be it naval or aircraft.

The main use of the ekranoplan is combatting surface ship groups, such as aircraft carrier groups. The high-speed ships deprive the enemy of time (for distances greater than 500 kilometres) to detect the ekranoplans traveling directly over water and attack them.

Their significant size will allow them to carry anti-ship weapons sufficient to inflict enough damage to the aircraft carrier group by four or five ekranoplans, as well as SAMs to counter enemy fighters. The technical aspects of such ekranoplans will probably be of 1500 to 1800 tonnes displacement, with speeds of up to 500 kilometres for distances of 5000 to 6000 miles, with main weapons systems of 12 to 16 anti-ship missiles with an effective range of up to 300 kilometres, SAMs with range of 120 to 160 kilometres, 1 or 2 30mm guns for close-range fights, 4 small drones for surveillance. This machine is capable of quickly reaching the launch point for anti-ship missiles, launch, then swiftly evade return fire.

For the destruction of enemy surface ships in closed marine theater, ekranoplans can be used against groups of ships of relatively small displacement, primarily in zones of powerful anti-aircraft and anti-ship defences. There exist designs with displacement between 100 and 150 tonnes, with speeds of 450 to 500 kilometres per hour, and  range of 500 miles while carrying 4 to 8 anti-ship missiles.

The capabilities of the ekranoplan moving at high speed, overcoming enemy defenses including in areas unreachable by other classes of ships and boats, makes it attractive for amphibious operations. It is these qualities that are important for the first wave of landing troops, which in cases of strong anti-landing enemy fire solves the problem of capturing the foothold.

As the condition of conducting amphibious operations is the conquest of the air and sea superiority in the landing area, assault ekranoplans do not require heavy armament. The need to lay down suppressive fire on the beaches can be satisfied by Multiple Launch Rocket System (MLRS). Given the likely volume of fire missions it is best to have on board 12 220mm rockets or 40 122mm rockets. With this equipment, the possible number of troops on board the ekranoplan of two to three hundred tonnes of displacement can be estimated at one company of infantry with standard weapons and equipment.