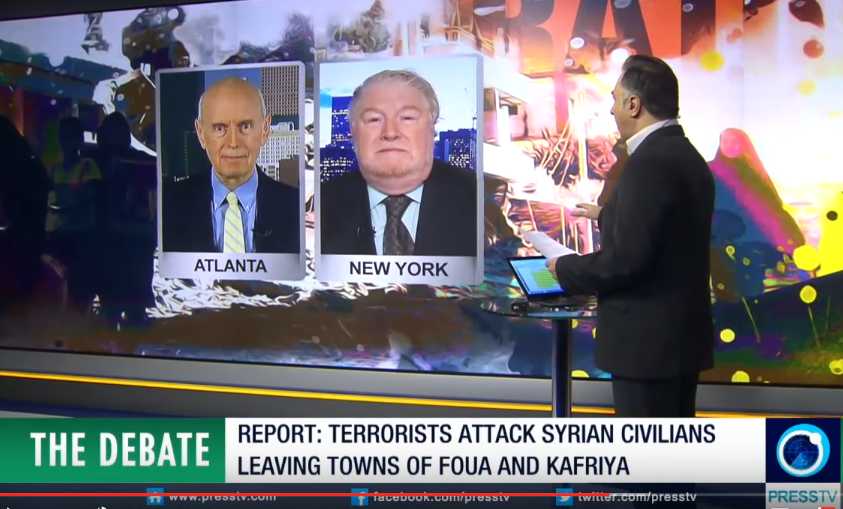 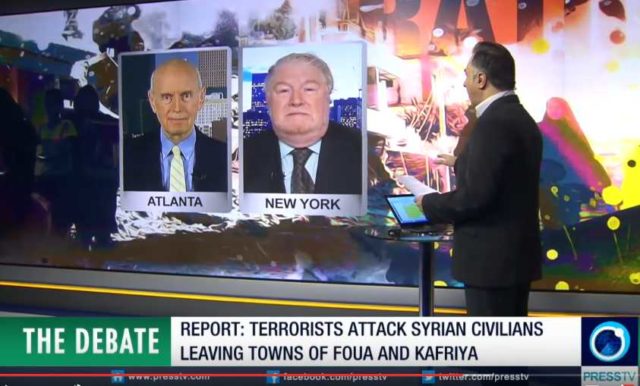 [ Note: This was a good a slugfest opportunity as one gets for a Debate Show opponent, from a well-funded thinktank group hardwired into the liberal establishment to provide bipartisanship to the NeoCon anti-Assad wing, which strives to give Assad a higher “devil profile” than the jihadis.

Notice how, while he drops in a few “both sides have committed atrocities”, he does not specifically acknowledge a single false news report, including those being revealed by eye witnesses, and neither does the UN, which you can tell is official policy, and which includes this guy.

But this was my opportunity to publicly challenge the UN on its coverup of the jihadi crimes against humanity there. Even the French Doctors without Borders are involved. When the Grand Mufti of Syria had his denomination-free hospitals taken over by the Jihadis, one facility had all of its dialysis machines stripped out and sold to Turkey.

The Mufti said that his other hospitals that were functioning after the jihadi takeover were then serving “jihadis only”. He did not say they doubled as command centers, but I will point this out. Then, when the hospitals/command centers were bombed, the jihadis killed some innocent people and spread them around for the British Intel video teams.

The intelligence people know this (and also know who pays them), so we know the UN knows, because they have access to these people.

Sure, not all the UN people are involved or even know, but the UN is effectively providing cover by keeping this quiet, and hence my suggestion to the Aleppo people that they give them some payback while they are there, and record it.

We will support the victims of Aleppo from our end here, but they have to step up to take control over how their story is told, including attacking those in the industrial-scale, fake news that has developed.

You have third world social media bloggers trying to make ad-click money by forging their own reports. Ian has the report of an independent team in Egypt trying to get in on the action, and such things have become the fake news gang bang of Aleppo. I don’t mean to be crude, but we know there was a lot of rape that went on. The locals use the euphemism of “they took our daughters”, so I feel no obligation to cut them any slack… JD ]

In this edition of the debate, we’ll discuss the operation and what the liberation means and how this has almost stifled the moves by the western coalition on their regime change aspiration.

Dear readers, if you want to get a better feel for how “connected” the establishment is via these groups, the Foreign Policy in Focus people, (with their 600 scholars) mention on their “about” page that they are a “project of” the Institute of Policy Studies.

They claim to be independent by not taking government money, and that may even be true. But governments who have long time major fronts pushing their positions are quite adept at funding them through a variety of means.

Take a look at how an extra $3 million came in during 2014, with most of it just going into reserves. How nice: