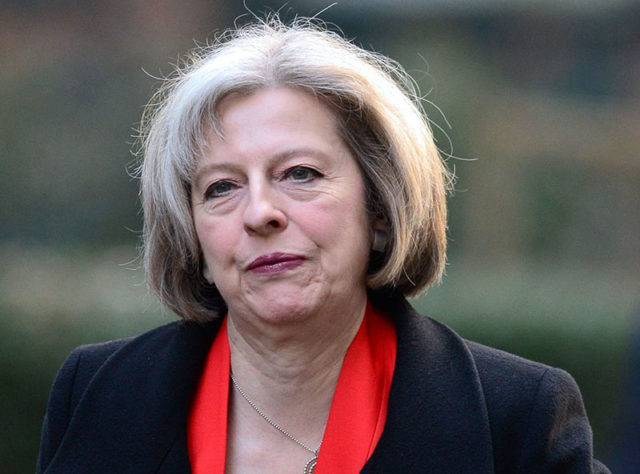 This is still a Christian country, as your colleague David Cameron reminded us not so long ago. But you wouldn’t think so when non-Christian creeds are given exceptional protection and privileges to smooth their ruffled feathers. Your government is even introducing new laws to stifle questions about Israel’s legitimacy and quash criticism of its criminal policies. We have entered a sinister era of censorship and harrassment as the gulf between government and public widens.

In an excruciating speech to a Conservative Friends of Israel lunch earlier this month, you told 800 guests that the British government will be marking the centenary of the infamous Balfour Declaration next year “with pride”. Yet that ill-conceived letter by the British foreign secretary caused a running sore in the Middle East that has lasted a hundred years. And Britain’s failure to make amends continues to endanger the whole region and cause grief for millions.

You said some astonishing things too about Israel’s brutal occupation of Palestine. For example, Britain stands “very firmly” for a two-state solution and the two sides must “sit down together, without preconditions, and work towards that lasting solution”. It is plain to nearly everyone that this futile and lopsided mantra is a ploy designed to buy Israel all the time it needs to establish enough irreversible ‘facts on the ground’ to ensure permanent annexation. But like all leaders before, you go along with it, And you’re careful not to mention that international law has already spoken and it’s high time for enforcement – or sanctions.

There seems little comprehension among you and your colleagues of the consequences for the Middle East, and indeed the whole world, if Israel is allowed to achieve its ambition to expand its borders to the Nile and the Euphrates.

You even praise Israel for being “a thriving democracy, a beacon of tolerance”, when it is obviously neither. Maybe an ethnocracy, or a theocracy, but certainly no liberal democracy.  As for your remark that it is only when you walk through Jerusalem or Tel Aviv that you see a country where people of all religions “are free and equal in the eyes of the law” and “Israel guarantees the rights of people of all religions, races and sexualities, and it wants to enable everyone to flourish”, have you ever walked through East Jerusalem?

What really offends me, though, is your belief that our two countries share “common values”. That’s straight out of Tel Aviv’s hasbara instruction manual. And it is deeply insulting to anyone who lives by Christian values, which are alien to the Istraeli regime given its crimes against humanity and cruelty to the indigenous people it terrorises. I don’t suppose too many British people feel they have much in common with a criminal foreign power that tortures children.

However, the speech did provide mild amusement when you unwisely attacked the successful BDS campaign – that’s boycott, divestment and sanctions – calling it wrong and unacceptable and warning that your government would “have no truck with those who subscribe to it”.  200 legal scholars and practising lawyers from 15 European countries promptly slapped you down in a statement that BDS is a lawful exercise of freedom of expression and outlawing it undermines a basic human right.  One expert pointed out that advocating for BDS is part of the fundamental freedoms protected by the International Convention on Civil and Political Rights. Another said BDS is civil society’s response to the international community’s irresponsible failure to act. Repressing it amounts to support for Israel’s violations of international law and a failure to honour the solemn pledge by states to ‘strictly respect the aims and principles of the Charter of the United Nations’.

Of course, if your Israeli friends don’t like BDS they only have to comply with international law like everyone else, get back behind Israel’s internationally recognised borders and leave the Palestinians alone.

Just think for a moment about the shredded remnants of Palestine, the endless misery in Gaza and the obscene 8-metre wall with gun towers imprisoning Bethlehem and its Christian community – all courtesy of Israel. Remember that in their 2014 blitz on Gaza Israel killed more than 500 children, injured 3,374, left more than 1,500 orphaned and 373,000 in need of psycho-social support.

There are 1.75 million people, including about 800,000 children under 15, packed into the tiny Gaza enclave with no escape. They have suffered horribly under Israeli blockade – a collective punishment which as you know is considered a war crime – for nearly 10 years. And your own ministers report that 90% of Gaza’s water is not fit even for agricultural use.  The puzzle is why your government would have any truck with anyone who subscribes to an Israel fan club.

According to Wiki, you are the daughter of an Anglican priest and a regular churchgoer. The Holy Land is the well-spring of your religion, is it not? I wonder what the Good Lord, looking down on the hell-hole Balfour created and Western politicians have perpetuated, thinks of your performance this Christmas.