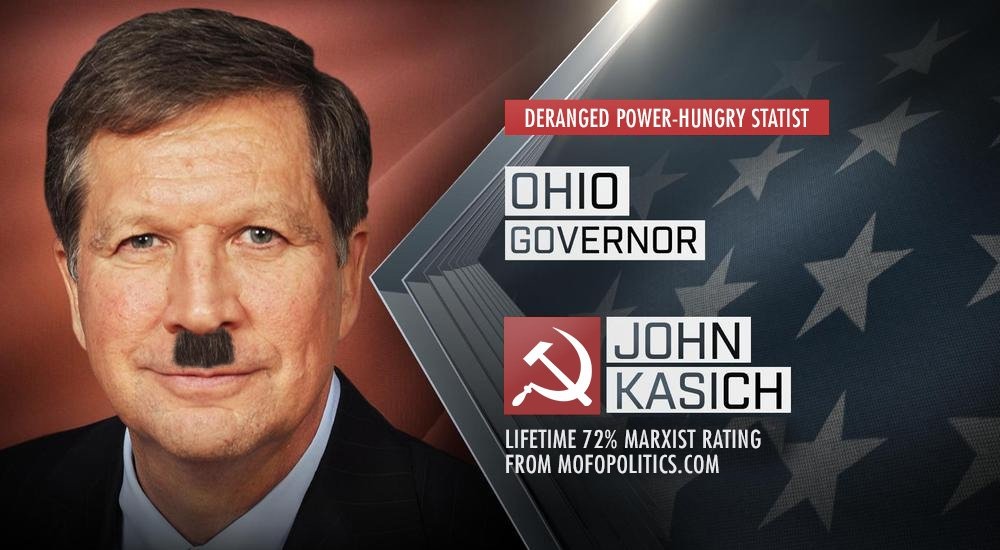 Editor’s note: As an Ohio resident, I am more than familiar with Kasich, pure Nazi down to his loafers, which were paid for by Sheldon Adelson, who bought his governorship with human trafficking cash.

Kasich, during the election, tried to pass himself off as a “moderate” republican but those of us who know him find Trump far more decent and humane and Trump is the least decent and humane person to ever be elected to any public office in the US.  If anyone disagrees with this, submit names in the comment section sourced from something other than fake news if possible and I am not sure that such a thing is possible.

Kasich is a monster, pure and simple, like Walker and Snyder and, of course, Pence.  Pence is worse and is only a heartbeat from the oval office, a corrupt slickster of the worst kind.  Ah, payback is coming:

“With Governor Kasich’s signature, Ohio becomes the latest state to stand up against the discrimination based on national origin inherent in efforts to boycott, divest or sanction Israel. It’s also a stand in support of free trade and academic freedom,” Howie Beigelman, executive director of Ohio Jewish Communities, which represents eight Jewish federations and their constituent agencies, said in a statement.

“But Ohio went a step further than anyone else. They included an opportunity for positive investment by the state and county treasurers in certain foreign bonds — including Israel’s — allowing our state to stand with Israel in a meaningful way, helping to create even more business, trade, and research opportunities.”

Rep. Kirk Schuring, R-Canton, the primary sponsor of the bill, said last month in a statement quoted by the Jewish News that the bill would provide increased economic opportunities for the state.

“Our state’s relationship with Israel generates more than $200 million of economic benefit for Ohio each year,” he said. “This legislation provides more opportunities for Ohio to continue its strong alliance with Israel, as well as bolster our economy here at home.”

The Ohio House of Representatives approved the bill in a 81-13 vote earlier in December.

The ACLU of Ohio has criticiased the legislation, calling “an unwarranted attack on First Amendment rights as it severely restricts the right to speak out or take action based on political beliefs,” in a statement last month.