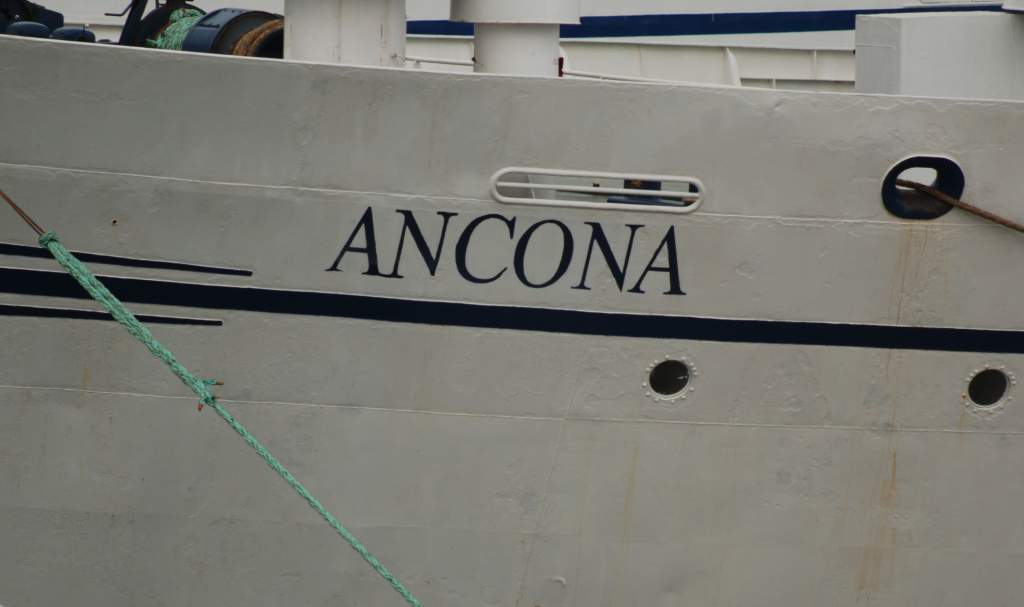 [ Editor’s note:  (photos by G. Duff)  I was in Italy earlier this year meeting with Italian security officials over a terrorist killing of an Adamas client.  Our collective investigation established a “ratline” into France, Germany, Belgium and the Netherlands, starting in the Middle East and Turkey.  From there it went into Greece or the Balkans and into Europe through the loosely guarded or Mafia controlled ferry ports in Italy.

It was VT that authorities told to watch the routes to Milan as the terrorist would need new ID.  We expected him to join a terror cell in Belgium and “cool off” for the next attack.

What I will get into here will be as much as I am allowed.  Terrorists are brought in through ports that haul goods in from Turkey.  Europe’s real factories are there, new machinery, refugee slave labor along with highly skilled Turks, the best workers in the world, no pollution laws, no minimum wage, no safety laws, no oversight of any kind.  These factories spew pollution just like their partners in China, the air north of Ismir is like Gary, Indiana in 1955, pure poison.  But I digress:
Ferries from around the Mediterranean, loaded with lorries, semis or whatever you call these trucks, offload with little or no examination, a very hurried and perfunctory customs, allowing nukes, chemical weapons, anything to be brought into the EU and Schengen, leaving Europe utterly defenseless.
Protecting the terrorists are security groups, public and private and police forces, but not all.  The Italian Carabineri  are not bought but receive little cooperation.  A long story there, cannot tell it.

The ports themselves are protected by local police, and this is a nightmare of its own, can’t tell that one either.  From there terrorists go to Milan, where our “new guy” was killed.  You see, Tunisia has an agreement with Italy to operate consulates to serve “special status” refugees who can stay in Italy up to a year without papers but are not allowed to leave.

In Milan, however, they are given phony documents and join terror cells in Paris and Berlin, (often run by police informants) even in Sweden, documents prepared with the help of the friends of SITE Intelligence and Rita Katz, or so we are told.

When ISIS took credit for the Berlin attack, SITE Intelligence, of all sources in the world, was the only ones to have the direct line with the terrorists who told them ISIS did it. ]

Italian Interior Minister Marco Minniti has confirmed that Anis Amri, wanted after the truck attack on a Berlin Christmas market, was killed during a shootout with police officers in the suburbs of Milan on Friday. Minniti told a news conference in Rome that “without any shadow of a doubt” the man was Amri, whose identity has been confirmed by fingerprints.

The minister said the officers were on routine patrol and stopped Amri in a Milan suburb on Friday morning. The man pulled out a pistol and opened fire, injuring one of the officers, but was shot dead as the patrol returned fire. Minniti did not elaborate on the issue, adding that his agency is in contact with the Germans, and further developments may come soon.

Peter Frank, Germany’s federal prosecutor, told reporters later on Friday that the investigation is far from over. Investigators will focus on uncovering Amri’s contacts to determine if he had accomplices or was a member of a terrorist network.

He added that it is also crucial to know how Amri had got to Italy despite suggestions that his injuries would have prevented him from covering long distances. Meanwhile, Milan police say they had received no information warning them that Amri could be in the city, according to Reuters.

“We had no intelligence that he could be in Milan,” Police Chief Antonio De Iesu said at a news conference. “They had no perception that it could be him, otherwise they would have been much more cautious.”

Earlier on Friday, Italian authorities said Amri was killed in a shootout with police in Milan on Thursday night, according to Reuters, citing a security source. The surprise report first appeared in the Italian magazine Panorama.

Conflicting news reports previously suggested the opposite. The German Police claimed that the suspect was hiding in Berlin. On Thursday, RBB released CCTV footage showing him at a local mosque one day after the attack. The police said Amri was injured, and therefore would not risk travelling too far.

On Friday, a man whose appearance matched that of the suspect was spotted in the northern Danish city of Aalborg, local police said in a tweet. According to police, the man, aged between 20 and 30, was “wearing a black hat, glasses, black beard and was unshaven.”

Police warned people to keep away from the area where he was spotted.

Investigators believe that Tunisian suspect Anis Amri was indeed behind the wheel of the truck that plowed into the Christmas market in Berlin on Monday, killing 12 and injuring 48. Interior Minister Thomas de Maiziere said that fingerprints and other “new evidence” made it “highly probable” that Amri was the actual perpetrator of the Monday attack.