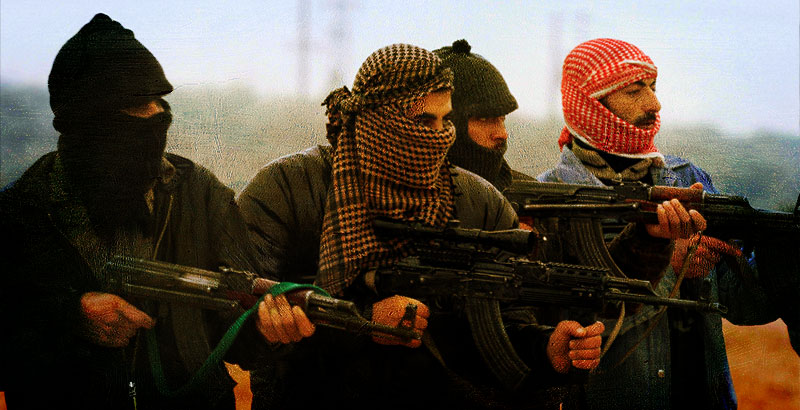 According to some reports, the number of executed victims reached 100 people.

Veterans Today sends our deepest condolences not only to these murdered PoWs, but the long record of all the rest summarily executed upon capture. And we do not hold the trigger pullers responsible alone, as all those who aided and abetted these terror groups, for whatever reason, are also guilty and should receive their own just punishment. These same people were accusing the Syrian army of doing what they knew their jihadi proxies were doing, to provide cover for them.

[ Editor’s Note: These Syrian Army PoWs would have been killed anyway if  the last group of jihadis fought it out to the end. There was no feasible way to make the turn over of the city and have any control over what the jihadis did with their prisoners before they left.

They just said they had none and took their free ride out. They have a long history of executing Syrian PoWs. The Syrian coalition had to do the deal to let the jihadis go as they needed Aleppo ASAP to gain the initiative for the whole war and to boost the morale of its allies.

We can see now they had their plan to push for a ceasefire and peace talks to begin a political process with those who have already signed onto it, and those who will come aboard. Kerry and Obama are out, not only because of the lame duck situation but what some are saying was a mini-coup by the Defense Dept. and CIA to kill working with the Russians on a joint terrorism basis, when they attack the Syrians at El-Ezzor, which killed the last ceasefire.

Kerry has admitted now that it was sabotaged, and the administration was just to embarrassed to take the needed action against those involved. It will be interesting to see what Trump does about it when his new people take over. He could really set off a firestorm by launching a Whitehouse investigation as a way of showing would would happen if similar games were played on him… Jim W. Dean ]

According to reports from the field, the so-called ‘moderate’ opposition massively executed captured soldiers of the Syrian Army before leaving the last neighborhoods of the city of Aleppo this week. Various pro-government sources claim that the number of killed Syrian soldiers reached 100 people. However, this information still has not been confirmed. At the same time, pro-opposition sources do not comment on the situation.

Reportedly, the massacre was committed by the Harakat Nour al-Din al-Zenki and Jaish al-Fatah groups in Sukkari and Bustan Al-Qasr districts of the city. The victims were mainly young men between the ages of 18-25.

A video, published online, presumably shows a Syrian soldier, captured, according to the voiceover, by members of the al-Din al-Zenki group. We also can see the same soldier in one of the photos, showing killed servicemen. So, it is clear that namely al-Din al-Zenki committed the murder of this soldier, as well as of others people in the picture.

The photos below were published by pro-government journalists, reporting from eastern Aleppo. The soldiers, presented in the photos, still have not been identified. According to some reports, a large number of the executed soldiers were beheaded by jihadists. However, there is no confirmation of this information. According to some reports, the High Command of the Syrian Army demanded to free these soldiers before jihadists left eastern Aleppo. However, militants denied the fact that they have any hostages.

Meanwhile, the Sputnik news agency also reported that Syrian servicemen discovered bodies of people, executed by terrorists, in one of the schools in Sukkari district. According to attorney of the Syrian military police, Samer Yousef, there were children among the killed people.

Reportedly, characteristic traces of an execution, “including severed heads and poked out eyes,” were on the bodies of the victims. Some of them were shot dead at close range. Yousef added that soon, the DNA samples will be taken in order to identify the victims. According to the attorney, the execution occurred about 4-5 days ago.