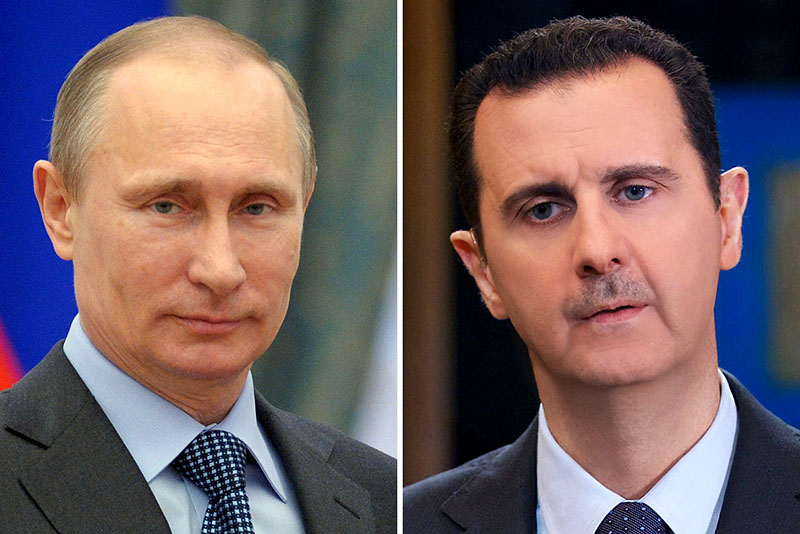 In the wake of yet another United Nations vote reaffirming the unanimous position of the international community — that every square centimeter of land stolen by Israel in its 1967 war of aggression must be relinquished – Russian President Vladimir Putin has an unprecedented opportunity to bring peace to the Middle East and inaugurate a new multipolar era in international relations. He can do so by liberating the Occupied Golan Heights and returning it to to its rightful owner, the government of Syria.

Putin should immediate declare and enforce a no-fly zone over Golan. Russia has the anti-aircraft capabilities to do this. Then he should give the Israeli squatters one week to evacuate.

Though the Zionist-dominated Western media and its brainwashed following would erupt in curses and lamentations, everyone else on earth would be cheering for Putin.

President Obama would not object. Though he would undoubtedly issue a pro forma verbal protest, Obama would secretly rejoice at the humiliation inflicted on his arch-enemy Benjamin Netanyahu, and would make sure that the US did nothing to prevent the liberation of Golan.

Incoming President Trump, surrounded as he is by  Greater-Israel-humping Zionist lunatics, might issue an angry, bombastic tweet or two. But Putin and Trump seem to have an unspoken understanding; and by the time Trump took office the return of the Golan to Syria would be a fait accompli. After all, as Bibi knows too well, you can’t argue with facts on the ground. Trump would then have an opportunity to try out his new policy of making foreign nations pay for American protection, by demanding that Israel and its Rothschild patrons return the trillions of dollars they have gouged out of American pockets…and  then pay the US top dollar to ensure that Putin doesn’t go right ahead and liberate ALL of Palestine.

That’s the kind of deal that a savvy businessman like Trump shouldn’t refuse.

Putin’s liberation of Golan would make him a hero to the entire Middle East, indeed to most of the world. The “Arab street,” currently brainwashed into anti-Russian anti-Assad insanity by Zionist-Saudi media, would erupt in adulation. Zionist puppet rulers in Saudi Arabia, Qatar, Oman, UAE and elsewhere would be overthrown by their jubilant, Putin-loving populations.

The population of Turkey, too, would undergo a massive pro-Putin shift, and Erdogan would be pushed even further down the road he is already traveling, into an even more cordial alliance with Russia. This would lead to the complete resolution of the problem in Syria, where even most of the “rebels” would be so overjoyed by the return of Golan that they would be willing to overlook their differences with Assad and Putin.

The Yemen war, too, would end, as the corrupt Ibn Saud dictatorship would fall like the rotten house of cards it is. Israel humbled, its endless bluffs finally called, and its capacity to wreak havoc limited, the Zionist entity would finally have to accept a peace deal along the lines drawn by dozens of UN resolutions: Complete return to the pre-1967 borders, right of return for all Palestinians,  proportional compensation both for returnees and for those who choose not to return, and Equal Protection Clauses for an Israel/Palestine that would move towards binational federation and ultimate union.

Putin’s achievement — reversing the perpetual train wreck of decades of US domination of the Middle East – would highlight the advantages of a multi-polar, non-American-exceptionalist world. Once UN resolutions on Israel-Palestine were finally honored, the global community would be in a position to persuade other recalcitrant entities (such as India vis-a-vis Kashmir) to accept reasonable UN-endorsed solutions.

Given all of the above arguments for a Russian liberation of Golan, are there any counter-arguments?

Only one. It’s called the “Samson Option”: Israel’s threat to inflict nuclear annihilation on the capitals of Europe and the Middle East if it is ever forced to accept United Nations demands that it withdraw from the Occupied Territories and accept Right of Return for the Palestinians.

So should Putin call Israel’s bluff?

Somebody will eventually have to. I say let’s do it now and get it over with.