Mr. Trump, where is your man representing the interests of the “Common Man” who helped you get elected? We see none.

I’m not so sure of how many of our readers remember Henry Wallace. A short reminder, Wallace served as Secretary of Agriculture and Secretary of Commerce and later as the 33rd Vice-President for Franklin D. Roosevelt until such time the DNC chair Robert Hannegan and the Southern Segregationists organized to remove him and select Harry Truman as Vice-President. He did not fit well with the self-serving “clubby” style of the US Senate, and they worked hard to defeat him, and they did. He was too progressive for his time.

The defeat of Henry Wallace as Vice-President by the DNC chair could be reminiscent of the dirty and criminal role played by Debbie Wasserman Schultz and her gangs in making sure that Bernie Sanders had no chance to win the Democratic nomination. 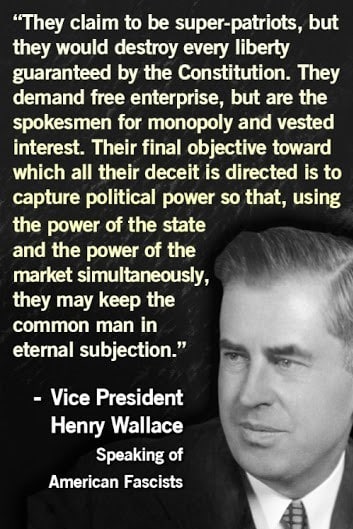 Henry Wallace was a “key advocate” and sponsor of the Agriculture Adjustment Administration and the Rural Electrification Administration and the Soil Conservation Service and the Farm Credit Administration — agencies that played a key and critical role in taking America and Americans out of the Great Depression. He took the Department of Agriculture out of marginalization and obscurity and made it into one of the key departments in the nations, serving America’s farmers and the world, making sure that America always has enough food on the table.

On May 8th, 1942 in New York City, Henry Wallace gave one of his most memorable speeches “The Century for the Common Man”. He spoke of progressive ideas and idealism and spoke of freedom and slavery and freedom and colonialism, with the need “for all to cooperate to raise the standards of living for the common man.” Mr. Trump sure could use some of Henry Wallace’s ideas.

In contrast, Henry Luce, the patrician publisher of Times and Life argued for “American Century” and calling for world dominance “ to exert upon the world the full impact of our influence, for such purpose as we see fit and by such means as we see fit”. Two worldviews were and remain the same to our day. Bush and Cheney’s America’s New Century took us to wars, and to loss of tens of thousands of American lives, the wasting of $ 4 Trillion and the death of millions around the world, and the total destruction of nations, and the rise of terrorism as the new plague.

Henry Wallace stood for every “Common Man”, White as well as Black. He called for an end to segregation and end of colonialism declaring, “No nation will have the God given right to exploit other nations. Older nations will have the privilege to help the younger nations get started on the path of industrialization, but there must be neither military nor economic imperialism”. America’s French and British allies with almost all of Asia and Africa under colonial rules were very angry about Wallace views and advocacy to say the least. However today, America is the world imperialist power with world military, political and economic dominance second to none.

However, his most daring statement was directed to America’s fascist “who would prefer not to use violence. His method is to poison the channels of public information.” He continued to declare

“The American fascists are most easily recognized by their deliberate perversion of truth and fact. Their newspapers and propaganda carefully cultivate every fissure of disunity… They claim to be super-patriots, but they would destroy every liberty guaranteed by the Constitution. They demand free enterprise but are the spokesmen for monopoly and vested interest. Their final objective toward which all their deceit is directed is to capture political power so that, using the power of the state and the power of the market simultaneously, they may keep the common man in eternal subjection”.

Bernie Sanders is the Henry Wallace of his time, in that both spoke of the needs for an end to wars, an end to racial segregation, advocates for unions, national health care, public works and jobs, and equality of men and women.

America today should reflect on Henry Wallace and his views as we usher new presidency with President Trump winning the votes of the “Common Man” yet to appoint one key member of his cabinet to represent the “ Common Man”.

What we see so far, is that “Common Man” is totally neglected in Donald Trump presidency with ‘big alligators” who took the “Common Man” to the cleaners in the recent financial collapse, with loss of jobs and export of factories playing a key role in the administration.

While recognizing the powerful case for the “Common Man”, we must not exonerate him from his misfortune. The lack of will to train and retrain, failing to demand from his government the necessary training needed to give him the needs and status of the Middle Class, which he lost due to plant closing and export of jobs.

The same “Common Man” today who demands and wants the jobs and the training, is the same man who is against any and all government agencies that provide him with such training and is against the health care system that he lost. Let us hope the “Common Man” makes sure that Mr. Trump delivers on his promises.