[ Editor’s Note: Well this certainly comes as no surprise as the jihadis were quick to have jumped on the organ selling band wagon since the trade has been set up for some time. Mosul has had a similar trade going on, and Israel’s snatching organs from dead Palestinians is well documented.

We are seeing a solid response to VT’s emergency message sent to the Russians as the liberation of Aleppo began, that they really had to focus on turning the atrocity story media campaign around on those who have been doing it a long time now, and their supporters.

We are watching now do a wonderful job with a stream of stories, exactly what we need to put that wooden stake in the heart of the proxy terrorist beast.

This is “scarlet letter” time now where a list of countries and big media organizations need to be tattooed on their foreheads not only the horrors they have covering up what they and their proxies have been doing, but charging the Damascus with such as a smokescreen tactic for their own crimes against humanity. 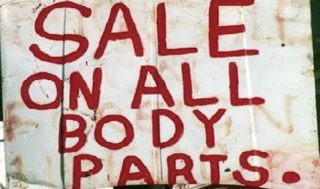 And Turkey is on the list here as it was grand central station for organ trade during the Iraq and Syria conflicts. All the Western security agencies were aware of this, and of course the media, who chose to lay low and not embarrass their respective countries.

But they did not think it out fully. Did they really think that such ongoing horrors could be kept secret, or the “I did not know” defense would be a magic soap to wash them clean of any responsibility themselves? We all have to work now to build of solid historical database for this new and real holocaust of Syrian and Iraqi people by what we have come to call “the usual suspects”.

We may not be able to sell their organs, but we can certainly take away any reputation they have so they can no longer hide behind that. Justice for the dead by punishing those guilty cannot bring them back, but it can go a long way to making a repeat performance less likely when those responsible are fully exposed… Jim W. Dean ]

After the liberation of Syria’s second-largest city of Aleppo from jihadists, horrific details of their rule continue coming to light: local residents have revealed to Sputnik Arabic the mechanisms of a well-established network of organ traders and their price list.

Amid so much western fuss concerning the so-called “Russian atrocities” during the liberation of Aleppo, local residents of the liberated city sat down with Sputnik Arabic to reveal for the first time the horrific details of the jihadists’ rule.

They spoke of a massive illegal human organ trade across the border with Turkey, set up by the militants. Civilians learned to fear the local emergency vehicles as they sped around the city hunting for potential donors. One of the “patients” happened to be 60-year-old Abu Mohammad.

“We were shelled from a grenade launcher and immediately afterwards rebels came in an emergency vehicle. They ended up stealing one of my kidneys and part of my spleen,” he told Sputnik.

He further described the mechanism of the traders’ operations: a team of rebels wait for an explosion and immediately afterwards pounce on the wounded and dead. Some of those wounded could have been later returned home, he said.

Alia has been residing in the Bustan al-Qasr district of Aleppo which was under control of Al-Nusra Front. Once she was offered to undergo treatment in a Turkish clinic as none of eastern Aleppo’s clinics had enough medication.

“There was a huge market on the border with Turkey where virtually anything was on sale, including women and children. A dead body was selling for 25,000 Turkish lira (TRL), the equivalent of $50, a body of an injured person was selling for 150,000 TRL ($290),” she told Sputnik. “Every day those wounded at war are sent to hospitals and are regarded as potential donors,” she said.

According to statistics, there have been 18,000 documented cases of illegal removal of human organs in the north of Syria. However the majority of these secretive crimes will remain that way, as people are afraid to openly speak about them. A group of forensic experts from Aleppo told Sputnik that it was pretty easy to obtain a human organ in the city.

It is located not far from the Syrian-Turkish border which could be easily crossed from the districts which were under control of the rebels. Many foreigners who were allegedly offering humanitarian aid have flooded the city through that border.

In fact, these were predominantly mafia who, together with foreign medics, were hunting for human organs and sending them across the border.

Doctor Bagjat Akrush told Sputnik that many Syrian medics have been involved in this criminal industry under the cover of the war. It was most active in the hot spots in the north and east of Syria and in the refugee camps. The governments of many countries have taken part in these crimes either directly or covertly and have done nothing to stop it.

The doctor said that the majority of these crimes have been committed in the north of the country and children were among those suffered. Up to 100,000 children in the refugee camps on the Turkish territory are facing the same very danger, he said. Up to 80 percent of refugees in these camps are women and children who have been on sale for almost three years.

And it is no secret that the Turks are also involved in it. The war in Syria made it possible for criminals to get very cheap human organs, Akrush went on. They choose a victim through a medical organization, desirably a healthy one as the organs of a diseased man are not that in-demand. Then the organs are sent across the border. Even though Syrian law prohibits the trade in human organs, such crimes are usually done illegally and covertly, he finally stated.