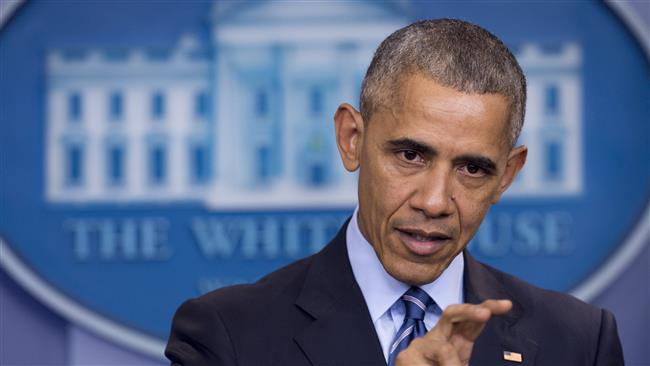 [ Editor’s Note:This is about what we have been expecting, a fanny covering move by Obama so it could not be said he did nothing. Expect to see 35 US diplomats in Russia ordered to leave soon, as the Russians had already indicated their response would be an equivalent one.

The backdrop on this has been Trump’s dissing the hacking claims, and the Obama security people did not put their proof on the table with the Obama announcement. So Trump will still have his reset button on the oval office desk to push when he wants.

And with new security people coming into the top slots, I have a funny feeling that Trump is going to ask to see the evidence quickly, and then we might hear more about it.

What Obama did not say is that his administration would stop all covert foreign election manipulation, color revolution and unconstitutional regime change activities in January, in an attempt to finally validate his Nobel Peace Prize.

It certainly is going to be an interesting year in 2017. Most of us are working on major New Year articles, the looking back and looking forward kind, which this time of year is the sweet spot for doing. The Kissinger coverage this past week on his advising Trump to dump the Russian sanctions was not a fluke on its timing.

I am thinking we will see Henry back in action as Trump’s Energizer Bunny foreign policy adviser to balance out his new people. It’s going to be a hell of a ride… Jim W. Dean ]

The United States has announced a series of economic sanctions against Russia over allegations that it interfered in the 2016 presidential election through cyber attacks.

“I have ordered a number of actions in response to the Russian government’s aggressive harassment of US officials and cyber operations aimed at the US election,” outgoing President Barack Obama said on Thursday.

“These actions follow repeated private and public warnings that we have issued to the Russian government, and are a necessary and appropriate response to efforts to harm US interests in violation of established international norms of behavior,” he added.

According to statements from the White House and the Treasury Department, the sanctions target Russia’s FSB and GRU intelligence agencies, four individual GRU officers, and three companies who allegedly provided support to the GRU, and two Russian individuals for using cyber-enabled means to cause misappropriation of funds and personal identifying information.

Under Thursday’s actions, the US also shut down of two Russian compounds in New York and Maryland that the United States says are used “for intelligence-related purposes.”

In addition, Obama said that 35 Russian diplomats have been asked to leave the United States, declaring them as “persona non grata”.

The White House said in a statement that there was the consensus from the US Intelligence Community that Russia’s intervention in US elections via cyberhacking as “unacceptable and will not be tolerated.”

“Russia’s cyberactivities were intended to influence the election, erode faith in US democratic institutions, sow doubt about the integrity of our electoral process, and undermine confidence in the institutions of the US government,” the statement said. “These actions are unacceptable and will not be tolerated.”

The Obama administration has repeatedly claimed that the hacking attacks weeks before the election against some Democratic organizations were carried out by Russia as part of Moscow’s plan to interfere in the election process in order to sway the vote in President-elect Donald Trump’s favor, a claim that has been rejected by Moscow.

According to Obama, US intelligence agencies are in possession of evidence that shows Russian President Vladimir Putin supervised the hacking, which targeted the Democratic National Committee (DNC) and John Podesta, a top aide to defeated Democratic candidate Hillary Clinton.

Several American senators, including Republican Senator Lindsey Graham, have called on the government to impose sanctions against Russia for its alleged meddling in the election.

Graham said on Wednesday that Moscow needed to understand it had gone too far during the election, and that new sanctions would target Russian president. “It is now time for Russia to understand – enough is enough.”

President-elect Trump has repeatedly called for better relations with Moscow. He has rejected claims that Russian intelligence agencies were responsible for the alleged hacking.

Talking to reporters at his Mar-a-Lago resort in Florida on Wednesday night, Trump downplayed the allegations of Russian intervention in the election and stressed the need to move forward. He also turned down talk of imposing sanctions against Russia.

However, in a statement released shortly after the announcement of sanctions, Republican House Speaker Paul Ryan described the Obama administration’s response an “overdue” yet “appropriate way to end eight years of failed policy with Russia.”