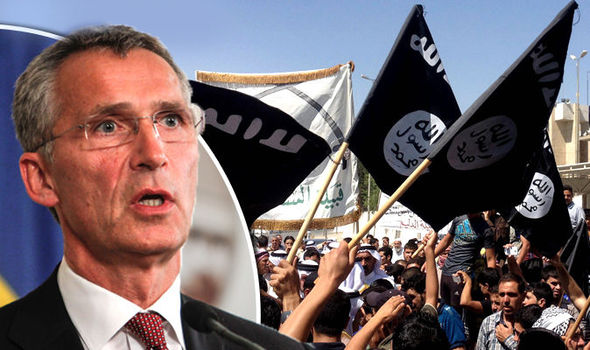 [ Editor’s Note: As VT predicted, the real story on who was responsible for the horrors inflicted on Aleppo will be coming out, and some of the Western media are already looking for cover. We have reported on the many rat lines use by a variety of Western and Gulf State Intel agencies to arm the insurgents and jihadis and who later even provided Intel for their operations.

NATO has been in it up to its eyeballs, in terms of knowing what is going on and assisting where deemed appropriate. The story below includes an interview with the Syrian MP who first reported the NATO and Gulf State officers in Aleppo, who we were already aware of, as they had been in other parts of Syria in opposition and jihadi command bunkers, which got a bit riskier when the Russians came in.

But with the collapse of Aleppo, we knew there would be a treasure trove of hard evidence, and we are finding the ammo dumps that survived not being spotted and destroyed by the Syrian coalition. Much of this stuff will not have a paper trail from the US to Syria, but with some US and NATO ally stops along the way.

Weapons all have serial numbers, which are wonderful things for tracing where they were made, with their transportation more of a challenge. A few tons of NATO weapons is a drop in the bucket.

Most came through the CIA rat line into the Balkans and old Soviet States, and then the Western weapons bought by the Gulf States and transferred with a wink and a nod to the various jihadi groups. But at the end of the day, the bottom line is still aiding and abetting terrorism, which is a pretty serious felony, unless you are a state sponsor of terrorism, like you know who… Jim W. Dean ]

Huge stockpiles of weaponry and ammunition, many with NATO markings, were discovered in East Aleppo when the Al-Nusra militants, a local branch of Al Qaida, were pushed out of the city by Syrian forces.

The previous reports that NATO personnel were captured are now retracted, as they were allowed to leave with the militants on the buses provided according to the agreement, to spare NATO the embarrassment. FWM interviews the Syrian MP Fares Shehabi, an Aleppo resident himself. He calls the discoveries “SyriaGate”.

Mr. Shehabi, European mainstream media and leading politicians are upset about the liberation of Aleppo by the Syrian Arab Army. They write reports about massacres committed by the army and horrified civilians in Aleppo…

– It is the total opposite. The news in Europe is a real problem because they report exactly the opposite of the real facts in Syria. We were able to liberate around 100.000 civilians who were held hostage by terrorists in Aleppo. A lot of them were taken hostage for more than four years.

These liberated civilians are happy now. The 1.5 million civilians who left Aleppo since 2012 are now able to come home again. This is a very positive and happy moment for Aleppo and Syria in general. We were able to celebrate Christmas in Aleppo for the first time since 4.5 years – we celebrate Christmas every day now in our city!

So the terrorists left the city completely?

– Yes, but before they left they executed more than hundred Syrian soldiers and hundreds of civilians. We found their bodies. This is all documented. Any international independent investigation can see and check the evidence of these terrorist crimes. But we are happy that our city is now liberated.

Some rural areas around Aleppo are still under terrorist occupation. The next step will be to liberate the countryside so the city is well maintained and well protected. – What we found there whole weaponry warehouses which were put in former school buildings by the terrorist forces. Our schools were turned into Al Qaida military bases. We found at those Al-Nusra bases – Al-Nusra is a branch of Al Qaida – full with NATO weaponry. We found tons of these weapons. I call that “SyriaGate” – the US and NATO arm and support terrorist gangs which are even on the official UN terror list in order to topple the legitimate government of a sovereign country. This is totally ridiculous of the West…

– Because nobody can guarantee that these weapons will not be used one day against the West itself by these terrorists. American and European tax payer’s money is abused to arm terrorist gangs which are ready to direct their guns any time against America and European civilians. This is a huge scandal. What do you know about the presence of Western military and intel experts and advisors in the terrorist controlled areas of Aleppo? Earlier reports spoke about captured NATO personnel.

– We didn’t capture any European or American military advisor in Aleppo. However we have reliable information that many of them were there and left the city with the buses we provided for the evacuation of the terrorist forces after their capitulation.

Also some of these so-called activists as Bilal Abdul Kareem who is an Afro-American from New York and a loud supporter of the Al Qaida gangs in Syria. Kareem’s presence in Aleppo was supported by the Obama administration and he was often in Western news introduced as “independent journalist”.

And there were many other Western agents and terrorist supporters as well in Aleppo who left the city with the buses. This is by the way the reason why the West pushed so hard for this evacuation. Otherwise all these agents, advisors and supporters would have been captured by us and would have been exposed. That would have been a big embarrassment for the West. Shehabi calls the discovery “SyriaGate” because it proves the US armed a group that is on its own terror list. Photo: Syrian Arab Army

The fate of Aleppo didn’t play such a big role in Western media for the last 4.5 years. Since the start of the liberation operations of the Syrian Arab Army the situation changed completely: All of the sudden Western media, politicians and NGOs were campaigning – against the Syrian Army. They accused the Syrian Army of committing “genocide” in Aleppo, of bombarding hospitals, of massacring children and babies…

– We Syrians paid in blood and destruction. Our own blood is the currency for these Western lies and this “misunderstanding”. Someone in the West can always say “Oh sorry, I got it somehow wrong!”, but we paid with our blood and our lives for this horrible ignorance.

Aleppo was conquered by Al Qaida gangs in summer 2012. There were no Aleppo residence involved, our city was very peaceful, no one took the arms against the government. We were conquered by the terrorists with heavy weapons and they took 70 percent of our city.

In 2012 around two million civilians lived in East Aleppo, 1.5 million left the occupied territory to safe zones. Nobody in the West spoke about the displacement of these 1.5 million people who were fleeing into government controlled areas. America and Europe were silent.

Nobody in the West was interested in the 11.000 civilians killed by the terrorist gangs in four years of random shellings and bombardments. 30 per cent of these killed civilians are children. 4.5 years we were losing innocent civilians by terrorist grenades, explosives and snipers. European politicians, media and NGOs seem to care more about the fate of the terrorists than about the civilians of Aleppo?

– There is no other explanation for that behaviour. Again: 4.5 years the terrorists brought the hell to the civilians of Aleppo, but the West didn’t care. When we liberate the terrorist controlled areas the West reacts with a huge campaign against us. At the same time the whole Western media campaigns for liberating the Iraqi city of Mosul from the terrorist gangs of the so-called “Islamic State”.

Why is it allowed to liberate Mosul, but forbidden to liberate Aleppo? This is a big hypocrisy. I recommend to the Western audience to put themselves in our shoes. Imagine that tens of thousands Al Qaida terrorists occupy half of Berlin, Paris or London? What would the people do? They would hope for liberation by their army. We Aleppo people waited 4.5 years for our liberation!

But we had to bring that sacrifice in order to minimize the civilian causalities. We had to wait for a superpower – the Russian Federation – to help us. If our Army would have immediately started the counter attack in 2012 we might have had thousands of civilian losses and much more destruction. But we waited and we liberated our city. Thank god.