NOTICE: I have determined that it is necessary for Public Health and because the many nuclear reactors are Venting radioactive gases and Steam at nights and on weekends that all residents must stay inside at nights and on weekends. Especially hard hit are the cities listed as above 1000 CPM by the EPA (Environmental Protection Agency.) See YRTW for a recent list of Contaminated Cities.

Good Day, this is “Your Radiation This Week” for the past 2 weeks. These are the Recorded Beta and Gamma Combined Radiation Highs that affected people around the United States. YRTW  is published every two weeks on Saturday. The next publication dates are January 14 and January 28, 2017.

From December 17 to December 28, 2016 the deadly nuclear radiation decreased all across the United States. Only 36 American cities recorded Rad Reading greater than 1,000 CPM. It happened because most of the 104 nuclear power plants in the States were turned down to an idle or Switched Off.

Thousands of businesses, schools and other institutions either Closed or were running a partial schedule so that the expensive, dirty electricity from nuclear power plants was simply not necessary. The utilities used cheaper renewable electricity instead.

As the Rad leaking nukes were shut down or run with a light throttle the deadly Radiation in the air plummeted, too. All across the country the Rad was down. HALLELUJAH! All was getting better… if even for a while; 11 days to be exact.

The Rads started Creeping up Again

Then the Nuke boys let the hammer down on Dec 28, 2016 and started powering up the nukes as electricity demand increased. The more nuke power plants there are running hot; the more these brittle old Wignerized(16) rattletraps leak Rad like a sieve.

By December 30, 2016 49 American cities with Rad Monitors were recording Rad Readings over 1,000 CPM. The writing on the wall is clear; All nuclear power plants must be closed immediately. The Nuclear Industry people are murdering their neighbors – plain and simple.

Let’s all remember the 50 State Governors have various elements of a National Guard that work for them. As such, they have enough force to enter the killer nuclear compounds and assume control of local nuclear power plants under their health and safety as well as police powers.

If some misguided local rent-a-cops on the grounds of the leaking nuker plants get weird – just shoot’em. Let’s get right with history, Governors.

See New Video:  All Reactors Leak All Of The Time

Listed in Counts per Minute by the EPA (Environmental Protection Agency), a Count is one Radioactive Decay Registered by the Instrument. The Top Reporting Radioactive Cities are listed. The highest radiation reporting city is listed first, the least radioactive city over 1000 CPM reporting is listed last.

Still, all reporting cities are above normal. These are a portion of the American cities that exceeded 1,000 CPM these past 2 weeks. Take all necessary precautions.

Hallelujah! and pass the Ammo

Now the hammering Rad is clawing its way back with measurable Rad poisons. The count of reporting inhabited cities over 1,000 CPM jumped up to 47 cities in just 24 hours by the standard American measuring devices; then to 49 cities.

Nasty, nasty stuff. There is no known defense against it as the world war on civilians continues and intensifies. The War is pushed hard by the few nuclear states’ high government officials and very rich “donors.”
Billions more will most assuredly die or be maimed and their minds enfeebled and retarded. Indeed, more than a Billion already have been according to the world famous mathematician Sr. Dr. Rosalie Bertell.

Years’ worth of dead reindeer bones litter the vast Central Arctic plain in Alaska. In 2010 the herd numbered 70,000 animals. The descent in numbers was rapid and without mercy. The iconic animals declined to only 22,000 animals this year, 2016.

Big males “average 400 to 600 pounds and females average 200 to 300 pounds in the Southern Alaska herd.” Northern Alaska animals are a bit smaller. These hardy animals survived since forever in the brutal Arctic to be done in by tiny poisonous molecules originating from the nuclear nations around the globe.

What a pointless waste. The arrogant Psycho humanoid animals running the nuclear weapons labs in a few countries knew it would happen and they did it anyway. They are truly the despised humans and are to be shunned till they die.

Evacuation and Extinction – we need to talk about this. This is a very real likelihood for us all.

The Forestry Service recent Aerial Survey dramatically increased the dead tree count in the California forests to more than 102 Million dead trees. Worse yet, the radioactive trees do not decompose normally. This was also true at Chernobyl in Ukraine.

All the conditions are ripe, though, for swaths of forest fires of really Biblical proportions. Actually, War Time proportions would be more accurate, since the Uranium and other isotopes are the metals that Burn fiercely at very high temperatures [5,000 Deg. C.]

Little newborns don’t have much to look forward to; and ever increasing rad counts await them; if they are born at all.

All in all, the Earth is in a downward spiral to a crash landing. Who the President is doesn’t matter, there is nothing the President can do about it. May s/he enjoy a long walk in a dead forest.

Even worse, at the beginning and end of the day the 102 Million dead Trees are and ever will be radioactive. Don’t get Scammed into living in a wood house made of dead, radioactive trees. The trees must be buried – not burned. Indeed, the smoke from a dead burned radioactive tree is also radioactive.

The pieces of Rad are just smaller and more dangerous; reaching even further into your lungs and going through your skin. This is Creepy; like a Hollywood Horror Movie in real life.

Nichols on Nuclear – Fukushima and More

Copyright by Bob Nichols @ 2016: Reproduce and distribute
Give full attribution to Bob Nichols at [email protected]

1. The Radiation charts and graphs of the EPA. Individual queries can be built at the EPA RadNet Query Builder. Don’t skip the “2” in www2.
2. The EPA based reporting of NETC, an LLC.
3. These station’s Radiation equals combined Beta and Gamma Radiation. Note: Not all locations report Beta Radiation. Gamma Radiation Monitors are reporting publicly at all these locations.
4. Reference: Digilert 100 Flyer pdf, “Normal background is 5-20 CPM.” Copyright @ 2015 Keison International Ltd – All Rights Reserved.
5. CPM. “Although we can’t see it, taste it, smell it or hear it we can measure radiation and observe its effects. One way to measure radiation which the United States Environmental Protection Agency [EPA] has chosen to use on its radiation websites is in Counts Per Minute. Each Count is One Radioactive Decay.” Quote from the ‘Your Radiation This Week’ Apr 3, 2015.
6. Radiation destruction of chitin, IAEA, by Ershov, B.G.; Sukhov, N.L.; Nud’ga, L.A.; Baklagina, Yu.G.; Kozhevnikova, L.G.; Petropavlovskii, G.A. (Institute of Physical Chemistry, Moscow (Russian Federation)
7. “Plutonium Air” by Dr Paolo Scampa, AIPRI Blog, Aug 19, 2016,
8. “Radioactive Fertilizer,” AIPRI by Dr Paolo Scampa, September 23, 2016, AIPRI: Les engrais radioactifs,
9. “Texas has highest maternal mortality rate in developed world, study finds,” By ABBY GOODNOUGH OCT. 19, 2016,
EPA Proposal Allows Radiation Exposure in Drinking Water Equivalent to 250 Chest X-Rays a Year
10. “Forty-five (45) years later, the Nuclear States officially raise the amounts of “permitted radiation levels” by hundreds and sometimes thousands of times to maintain the utter and absolute dominance of the Nuclear State over everything, everywhere, for all time. No tolerance given.” [10] “In the never ending war between the suits (politicians) and the physicists, the suits win yet again; by changing the rules. It takes more than logic to fight these animals and win.”
11. US Gov: Walk Slow  May 24, 2013
12. “Baghdad” by Dr. Paolo Scampa, AIPRI, Saturday 12 November 2016 http://aipri.blogspot.it/2016/11/bagdad.html
13. “News Release, New Aerial Survey Identifies More Than 100 Million Dead Trees in California,” USDA Office of Communications, “This brings the total number of dead trees since 2010 to over 102 million,”
14. Caribou herd in Alaska suffering from mysterious decline, November 30, 2016, Noel Kirkpatrick, MNN Mother Nature Network, “The Central Arctic caribou herd in Alaska is experiencing a “steep decline” in its population, and scientists are researching the reasons why.”
15. “Facing a Dying Nation,” a line from the 1979 Tribal Rock Musical HAIR. A scene with “Facing a Dying Nation” starring Treat Williams from the movie is here:  The character Pfc. Berger is KIA in Vietnam in 1968.
16. It is Eugen Wigner’s name as a Verb. It’s about all things Wignerized.
See Notes on Your Radiation This Week No. 69 and 70 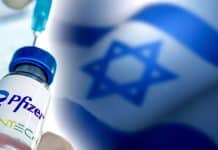 How the Israeli Ministry of Health Became an Agent for Pfizer