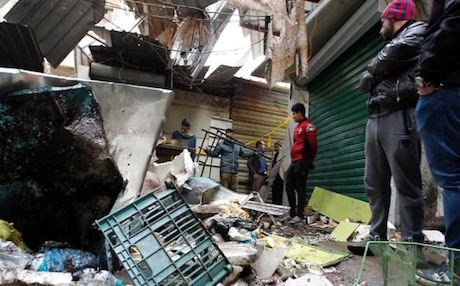 The Iraqi popular forces and Federal Police in a joint operation seized back the village of Shokran Westward of Mosul city.

A large number of ISIL terrorists were killed in fierce clashes with the Iraqi forces near Shokran village.

The Iraqi counterterrorism command headquarters in a statement announced that the Iraqi forces have purged terrorists from the Northern parts of al-Hodaba district.

In relevant remarks on Saturday, Spokesman of Iraq’s Counterterrorism Department Sabah al-Nauman disclosed that the country’s joint military forces have seized back several new areas in the early stages of the second phase of the Mosul Liberation Military Operation.

“The ISIL’s defense lines in the Western part of the city of Mosul have been demolished and new areas have come under our forces’ control in the beginning of the second phase of Mosul liberation operation,” al-Nauman told FNA.

He underlined that the main aim of the second phase of the Mosul liberation operation is to take full control of the remaining districts of Western Mosul.

Also on Saturday, Iraq’s joint military forces continued their advances in the Eastern part of the city of Mosul, and seized back a new strategic district there.

Several terrorists were killed and wounded in fierce clashes with the Iraqi army and its allies.

“At least 10 ISIL terrorists, including four notorious commanders, were killed in tough battle with the Iraqi government forces,” the Arabic-language media quoted General Judat as saying.

He, meantime, said that the Iraqi forces continued their advances in the city of Mosul, adding, “Over 66 ISIL terrorists have been killed in the Iraqi Federal police’s military operations.”

General Judat also said that hundreds of families in Mosul city have been transferred to military camps from al-Entesar and Shahrzad districts of the city.

On Thursday, the Iraqi security forces began the second phase of the Mosul operation in a number of Eastern and Southeastern districts of Mosul city, following a major halt of the offensive for much of December.

Iraqi Federal police initiated the advance on the districts of Somar, Saha, Intisar, and the industrial area on the left bank of Mosul, General Yahya Rasul, the spokesperson for the Iraqi Joint Command said, Baghdad Post quoted security officials as saying.

Also, Abdul-Ghani Al-Asadi, commander of the Iraqi Counterterrorism Forces (ICTF) told Iraqi media that the fresh offensive begun at 7:00 am on Thursday.

He said his forces have entered the eastern district of al-Quds, and made “progress” in the early hours on Thursday morning.

A military statement for the Nineveh operation said that the Iraqi army, the federal police and the ICTF are taking part in a joint operation to “fully liberate the left bank of Mosul”.

An officer from the rapid response forces told Reuters news agency that they are pushing from the Southeastern district of Intisar.

“Our troops now are advancing. In the first five or 10 minutes they took 500 meters. Just now they are starting to shoot,” the rapid response officer said, an elite force under the command of the Iraqi interior ministry.

The commander of the Golden Division, Fazil Barwari, earlier told Rudaw that he expects to liberate the East side of the city by New Year ’s Eve.

The aftermath of a blast in al-Sinak busy market. Photo: AFP

MOSUL, Iraq – The commander of Iraq’s counter-terrorism forces announced on Saturday that they had taken control of two more neighborhoods in eastern Mosul as twin blasts in Baghdad killed 28 and wounded 50 others.“We have closed doors upon ISIS after pushing them back in both Quds one and two neighborhoods,” Abdulghani Assadi, Iraqi counter-terror commander, told Rudaw in an exclusive interview, reporting high casualties among ISIS.

“ISIS causalities are on the rise. 2,000 militants have been killed so far,” Assadi added, saying that clearing the east side of the city will happen within days.

“ISIS is no longer in Quds,” Assadi said, declaring victory in a neighborhood that is next to Karama where militants are fiercely resisting in an effort to maintain their grip on the area.

The Iraqi army has liberated more than 40 neighborhoods in their operation that began on October 17 to recapture the country’s second largest city, Mosul, from the militants.

ISIS militants have deployed a number of snipers inside residential houses in eastern Mosul, slowing down the advance of Iraqi forces.

“The enemies are unpredictably changing plans,” Assadi said, describing the difficulties they are facing. “We also make progress in our plans” of maintaining a decisive push to clear eastern Mosul from the militants in coming days.

As the Iraqi army advanced in Mosul, two suicide bombers blew up their explosives on Saturday in the busy al-Sinak market in the center of Baghdad, killing at least 28 people and wounding 50 others.

ISIS issued a statement claiming responsibility for the attack.