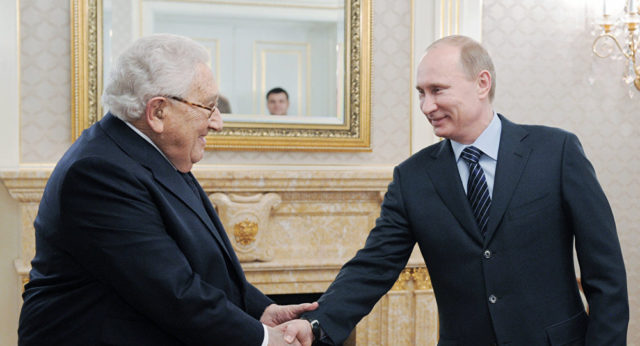 The expert (Vladimir Batyuk) noted that Kissinger has visited Russia many times and delivered “confidential messages from the US government to the Kremlin.”

[ Editor’s Note: This article below has lots of qualifiers in it, not wanting to get ahead of events. Gordon would call this a “seeding” piece, which presents as a possibility something we know is already in progress.

Kissinger has been getting the red carpet treatment on his several trips to Moscow and the Kremlin, and I think it is safe to say that they were not just exchanging autographs.

Putin and Trump had already been saying nice things about each other publicly in the thick of the campaign. What we may never know is did Trump send Henry to Putin first, or the other way around?

The classic reason for using a high level intermediary like Kissinger is so both parties can protect themselves from leaks and usual multiple Intel agencies’ snooping that could preempt the timing of any policy announcement changes.

For the parties wanting to prevent any improvement in the current horrible state of relations, getting their hands on the “fix it” plans would be priceless Intel. Washington insiders would sell their mothers to get hold of a working agreement to trade to a prospective deal wrecker.

The State Department has been tunneled like a Swiss Cheese, with a variety of sponsored trail watchers inserted in key areas to keep their outside sponsors with an eye on the inside, if for nothing else than for some early warning on what is in the pipeline — valuable material to have for anyone active in the futures markets.

There will be many layers to any change in US/Russia policy, NATO, the EU, and the Gordian Knot of the Mideast with Syria, and of course Ukraine. And with Trump’s announcing he wants to trigger his own Cold War with China and Iran, that will be two delicate items for Mr. Putin to handle. But I doubt he will be getting anything from Trump for free, and his opposition would savage him for it… Jim W. Dean ]

In late-December, the German newspaper Bild reported that former United States Secretary of State Henry Kissinger would be involved in normalizing ties between Moscow and Washington.

The analysis of information, obtained by European intelligence from President-elect Donald Trump’s transition team and cited by Bild, revealed that the White House would go for a “constructive cooperation” with the Kremlin.

The veteran diplomat has reportedly met with Trump several times in the past couple of months and is rumored to be his informal foreign policy adviser.

Kissinger served as the US state secretary under President Richard Nixon and President Gerald Ford in 1973-1977, winning the Nobel Peace Prize in 1973 for the ceasefire and withdrawal of US troops from Vietnam. Kissinger also pioneered the detente policy toward the Soviet Union and contributed to the improvement of US relations with China.

Kissinger’s participation in elaborating a new conception of US-Russia ties is very possible. This is a good piece of news for Moscow and a signal that Washington wants to establish dialogue, according to Vladimir Batyuk, a senior expert at the Institute for US and Canadian Studies, at the Russian Academy of Sciences.

“Kissinger could have been involved in development of a new conception of US-Russia ties because he has already played the role of an unofficial mediator between Moscow and Washington. He is very respected in the US and Russia. And he deserves his reputation,” Batyuk told RIA Novosti. The expert noted that Kissinger has visited Russia many times and delivered “confidential messages from the US government to the Kremlin.”

“So, Trump could have asked Kissinger to help him develop a new foreign policy course towards Russia,” he added.

Batyuk stressed that Kissinger’s involvement in US-Russia normalization would a “great piece of news” for Moscow because the diplomat is well-known for his realistic political views. “Such a classic of political realism could help overcome a deadlock in relations between the US and Russia,” he added.

According to the specialist, the main reason behind this deadlock is that Washington’s approach towards Moscow was based on “American ideals and values, rather than American interests.”

“When it comes to ideology no compromise is possible,” Batyuk said.

Kissinger will try to reduce US tensions with Russia as an adviser to President-elect Donald Trump and seek positive cooperation between the two nations, retired US Army Major and historian Todd Pierce told Sputnik.

“Compare Kissinger as an informal advisor and his ‘constructive cooperation’ with Hilary Clinton’s ‘informal advisor,’ the neo-fascist leaning Robert Kagan and his wife [current Assistant Secretary of State] Victoria Nuland who did her best to provoke war with Russia over Ukraine,” he said.

Pierce recalled that throughout his life and career, Kissinger had consistently championed detente, removing tensions and seeking warm relations between the US and the Soviet Union. In a December interview with the CBS broadcaster, the 93-year-old diplomat called Russian President Vladimir Putin a “character out of Dostoevsky” and a “cold calculator of the Russian national interest, as he conceives it.”

“Kissinger really does know our country well… It does not mean that he agrees with Russia on everything, and nobody would expect that from him, but at least, he has profound, not shallow knowledge [about Russia],” Kremlin Spokesperson Dmitry Peskov commented.

According to him, Putin and Kissinger have known each other for a long time and, whenever possible, exchange opinions on the situation in the world and the relationship between Russia and the US.