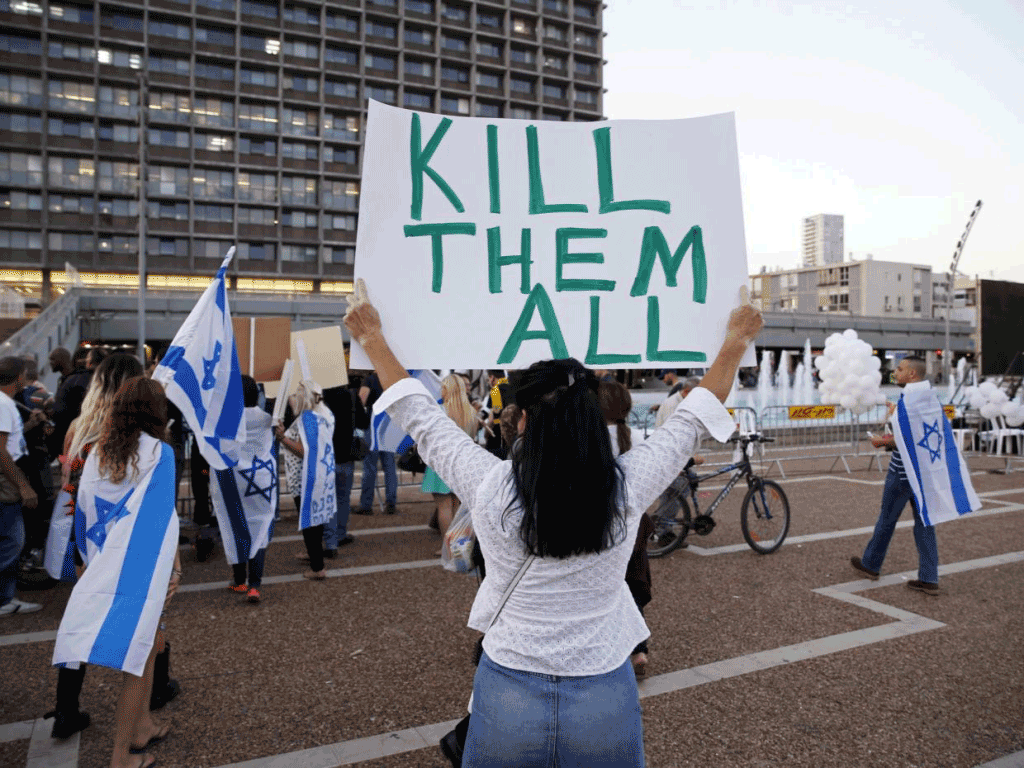 Human Rights Watch has just condemned Israel’s shoot-to-kill policy. The policy is pretty simple. If the Israeli Defense Force and police officers perceive or think that a Palestinian is about to commit a crime, then Israeli officials encourage the IDF to take that Palestinian down immediately and without hesitation.

Any Israeli officer should be able to “shoot to kill” the Palestinian “without thinking twice…no attacker male or female should make it out of any attack alive.”[1]

The evidence doesn’t matter at all. What matters is that if the IDF and the police want to kill a Palestinian, they can do so. The IDF and the police themselves are the evidence. All they have to do to defense their case is just say that the Palestinian was about to do something bad. Sari Bashi, Israel advocacy director at Human Rights Watch, declared that this clearly violates international law.[2]

The question is simply this: Has the Israeli regime gunned down Palestinians in the past based on this ridiculous policy? The answer is yes.

This should not be a surprise at all. We know for a fact that Israeli politician and Minister of Justice Ayelet Shaked has unequivocally and ontologically declared that the Palestinians are Israel’s enemies.

“Who is the enemy?,” she asked. “The Palestinian people. Why? Ask them, they started…” Shaked’s political ideology with respect to the Palestinians is worth quoting in full:

“The Palestinian people has declared war on us, and we must respond with war. Not an operation, not a slow-moving one, not low-intensity, not controlled escalation, no destruction of terror infrastructure, no targeted killings. Enough with the oblique references. This is a war. Words have meanings. This is a war.

“They are all enemy combatants, and their blood shall be on all their heads. Now this also includes the mothers of the martyrs, who send them to hell with flowers and kisses. They should follow their sons, nothing would be more just. They should go, as should the physical homes in which they raised the snakes. Otherwise, more little snakes will be raised there.”[3]

Shaked declares that she intends to “promote advanced processes of democratization in Israel,” but how does that line up with the idea that all Palestinians are the enemy? Does Shaked really think that democracy can even exist without what Kant would call the categorical imperative or practical reason? Can Israel’s laws with respect to the Palestinians be really universalized?

Shaked’s ideology is not democracy at all. It is actually a perversion of democracy. And if you think this is far-fetched, perhaps we need to bring in Rabbi Yitzhak Ginsburg, who said unequivocally:

“Any trial based on the assumption that Jews and goyim are equal is a total travesty of justice.”[4]

The million-dollar question is this: Was Shaked ever challenged by the Zionist Mafia and Neocon puppets for saying disgusting things about the Palestinians? Did any US politician reprimand her for her essentially diabolical plan?

The fact is that Benjamin Netanyahu and other Israeli officials (both past and present) have said similar things about the Palestinians. “In our neighborhood,” said King Bibi, “we need to protect ourselves from wild beasts.” If an Israeli soldier is convicted of manslaughter, says Netanyahu, he should be released immediately.

Long before Netanyahu came on the political scene, Prime Minister Yitzhak Shamir compared the Palestinians to “grasshoppers.”[5] Former IDF Chief of Staff Raphael Eitan declared way back in the 1980s:

Rabbi Yaacov Perrin: “One million Arabs are not worth a Jewish fingernail.”[6]

Shouldn’t homosexuals in America and much of the West be upset about Ben-Dahan degrading them here? Doesn’t organized Jewry in America tell us ad nauseam that homosexuality is a great thing? Why doesn’t the same organization reprimand Ben-Dahan for his racist views?

[3] Ishaan Tharoor, “Israel’s new justice minister considers all Palestinians to be ‘the enemy,’” Washington Post, May 7, 2015.