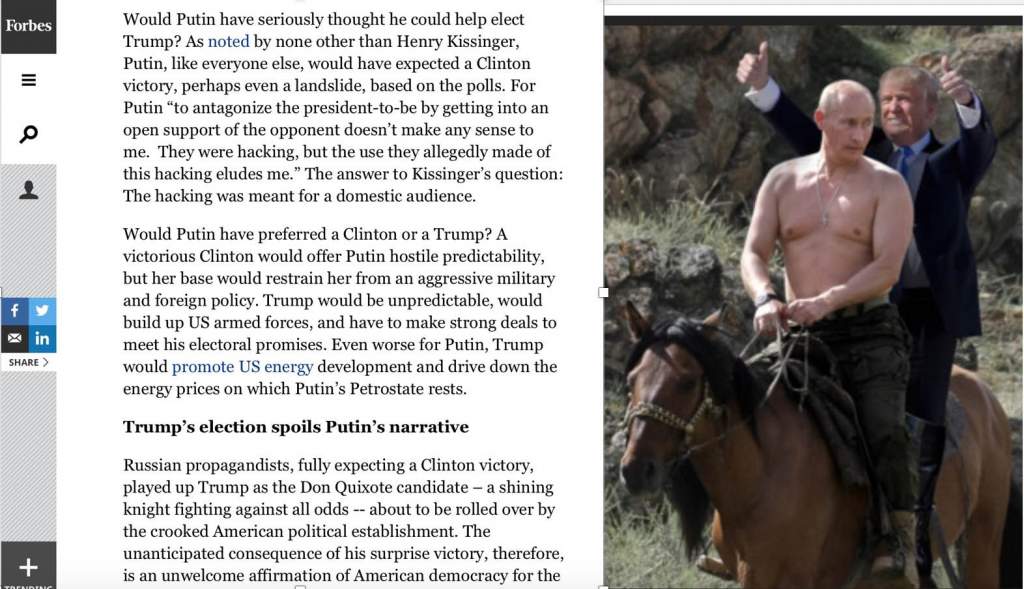 Why are we being bombarded with mainstream propaganda telling us “Russia hacked the election for Trump”?

To figure out what’s really going on, we need to read between the lines. And every so often, a mainstream article inadvertently offers us a glimpse of the man behind the curtain.

Such is the case with the recent Forbes article “Trump’s Election Spoils Putin’s Narrative To The Russian People.” I have not done a background check on the attributed author, Paul Roderick Gregory, because I don’t need to. Clearly this guy is playing the neocon-Straussian game of writing on two levels: at the surface, spouting his team’s propaganda line for the masses; while esoterically dropping hints about the “deep game” for his fellow sophisticates.

The neocons are chosenites at best, Satanists at worst. Their achilles heel is hubris: the heartfelt belief that they are smarter than anybody else, and therefore the only ones who can read between the lines.

So put on your thinking caps, dear readers, and consider the implications of what Kissinger/Gregory are telling us:

*Putin did NOT hack the election for Trump. (True)

*Putin did NOT believe that Trump could win. (True – the polls were right, Putin like everyone else believed them, Trump should have lost, the election WAS rigged…but not by Russia.)

*The election hack was executed using “Russian” cutouts, with the predicable consequence that: “The likely result of a serious investigation would be a strong suspicion that Putin ordered the hacks because such operations ‘require high-level approval.’ The Kremlin will continue to invoke ‘plausible deniability,’ and we may have to increasingly take action (against Russia) in the absence of certainty of guilt.”

*And take action we will! Trump’s presidency will likely be (as it was planned to be) a closet escalation of the war on Russia (as well as Iran and China): “A victorious Clinton would offer Putin hostile predictability, but her base would restrain her from an aggressive military and foreign policy. Trump would be unpredictable, would build up US armed forces, and have to make strong deals (with neocons – “strong deals” such as false flags? -KB) to meet his electoral promises (or make everybody forget them! -KB). Even worse for Putin, Trump would promote US energy development and drive down the energy prices on which Putin’s Petrostate rests.”

Translation: Neocon godfather Kissinger, Bush’s #1 choice for 9/11 Commission czar, has just explained why his team selected and inserted Trump. The Obama/Brzezinski strategy of mollifying Iran, sidelining Bibi, and avoiding direct military confrontation with Russia and Syria and Iran and China wasn’t…shall we say…robust enough for neocon tastes. These people want all-out war, and they want it now!

Kissinger/Gregory explain that Trump is “unpredictable” meaning he can be lured, tricked or blackmailed into neocon adventures. He is massively increasing the military budget and the nuclear weapons stockpile (especially the “highly useable” and “highly deniable” mini-nukes so beloved by the neocons, both for pulverizing/poisoning Muslims and for false flag operations). And he will accelerate the economic war on Russia using the plunge protection team (under cover of “US energy development”) to  collapse energy prices.

Trump will be in a perfect position to play neocon-driven hardball against Russia without anybody in the US objecting: His detractors have been brainwashed into hating Putin; while his supporters love everything he says and does, no matter how nutty. Surrounded by Iran-hating Bibi Netanyahu stooges, Trump may start the expanded war against Russia by attacking Iran, whether (in)directly, through a nod and a wink at Bibi, or by sanctioning an attempted coup d’état in Tehran (which, I predict, will fail even more miserably than previous US schemes against the Islamic Republic).

The Forbes article displays Kissinger/Gregory cackling in glee at their own cleverness. They think they suckered Putin into making lots of pro-Trump noises for domestic consumption, setting Putin up as the patsy for Bibi’s hack of the American election and the coming era of neocon-Trump warmongering. Now the serious anti-Russia action begins. As the authors tell us:

Trump’s election leaves Putin with a choice. He can use his propaganda to turn Trump into a monster on par with George Bush, Barack Obama and Hillary Clinton or he can use the brief window of a positive US presidential figure to explore whether there are real opportunities to repair US-Russian relations  abjectly surrender. (Authors’ words in strikeout typeface; my translation in boldface.)

Obviously Kissinger/Gregory are deeply worried about “Putin’s propaganda,” much of which consists of using truth for strategic effect, as with the leak of Victoria Nuland’s famous five billion dollar coup d’état in Ukraine. They want Putin to stop doing that, by going even further toward handing RT and Sputnik over to the Atlanticist/Zionist bankster-owned faction that has already largely defanged Russian English-language media. (Since that faction bit off a bigger chunk of RT a few years ago I have been persona non grata there, because I tell the truth about 9/11, false flags, Zionism, and Rothschild bankster dictatorship – the four topics RT ought to be harping on 24/7/365 but is no longer allowed to even mention.)

Putin and everyone else who wants a peaceful multipolar world — a category that may even include Donald Trump himself and at least a couple of his advisors and appointees — should recognize the monumental swindle Bibi, Henry the K, and their neocon team have pulled off, and get ready to start pushing back.