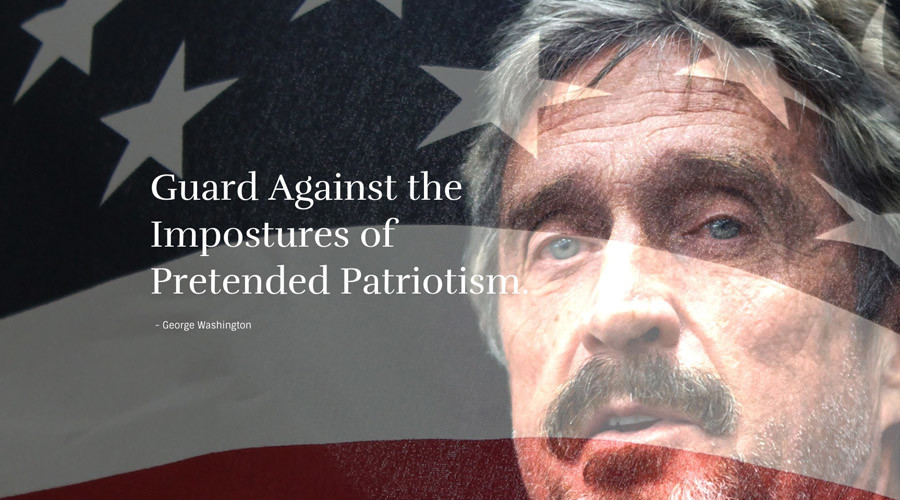 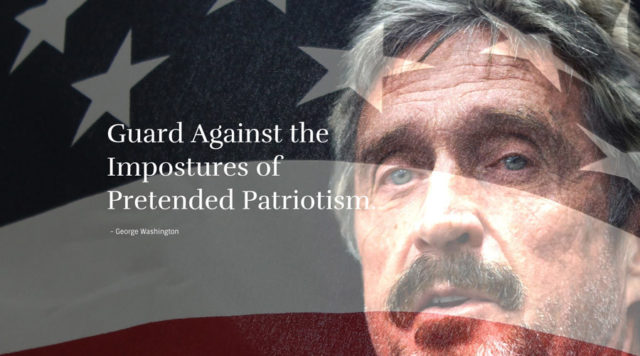 [ Editor’s Note: John McAfee is certainly having a good time. The election is over and he is still getting lots of airtime for his debunking of the claimed Democratic party hack.

The Intel agency briefing that Trump got today was a Shakespearean event, “Much ado about nothing”. The community seems to have an addiction to circumstantial evidence, with the biggest thing reported being that high-level Russian officials were happy that Trump had won.

Well, hello! Trump had already said he was going to rebuild better relations with Russia, so of course they are happy he won. The Office of the Director of National Intelligence report had SEVEN pages on RT alone, kind of an indication they were scraping the barrel to fill the report with something.

With the major anti-Russian sanction shift we are seeing in the EU, the sanctions appear to be on the way out in 2017; and so may be Angela Merkel for the role she played in the ill-conceived effort, plus opening Germany to a wave of Muslim extremist terrorism and violence that could last for decades.

One of these days, a foreign Intel agency or “contractor” is going to slip a mini-nuke into some dumb suicide jihadi’s car bomb, and we are going to have another 9-11 style terror event, because the lack of public discussion on the proliferation of the small nukes is the biggest security risk we all face.

With all the stories that VT has run on mini-nukes, we have not had a single call from anyone of standing wanting to learn more. It is the classic ostrich head in the sand response, and it includes government, media, security and academia. Their demonstrated interest is zero.

What McAfee is doing with his banging the drum, we should have been seeing some of the security, defense and academic trade organizations doing. They are AWOL, and we need a hell of a lot more public pressure to point that out to them… Jim W. Dean ]

The sloppiness of the alleged DNC hack by itself proves it was not organized by a nation state, and the “utter nonsense” presented as proof of Moscow’s involvement is rather evidence of intelligence agencies being “ignorant and naïve,” John McAfee told RT.

Cybersecurity legend McAfee is one of the modern computer tech pioneers and the developer of the first commercial antivirus program, who has been in the business for the past 50 years.

He is also the CEO of MGT Capital Investments, and a former presidential candidate for the Libertarian Party.

The so-called evidence of the Russian involvement in the hacks not only looks like “the most deceptive propaganda was perpetrated on the American public” but actually proves quite the opposite, McAfee believes.

“In there are four facts which they claim prove that Russia did this hack. It was utter nonsense. The information was number one – Russian language was found in the malware. Number two – a Cyrillic keyboard was used. The forensic science can now tell what type of keyboard was used to develop a piece of a malware,” McAfee told RT.

“Number three – the compiler, the piece of software that compiles the code so that it can execute, always dated time stamps. The time stamps were in a time zone for the business hours of Moscow and St. Petersburg and other places in Russia and the number four that the IP address pointed to a Russian address.”

To make it simple for the American audience, McAfee metaphorically explained the situation:

“Seriously, if Russia declared war on us because we hacked Russia and the head of the CIA and the intelligence committee came to the Congress and they ask him ‘What happened?’ – ‘Oh, well you know we didn’t have time to remove English language, we didn’t have time to move the date stamp, the guy could not use a Chinese keyboard, so we gave him our regular keyboard. And also there was my wife’s birthday so I could not remove the IP address.’”

“Please, that person would be scheduled for a suicide,” McAfee concluded.

Thus, McAfee believes, the whole “Russian hacking” narrative is either “propaganda intended to incite the American people, to anger toward Russia for some reason, or our intelligence community is so ignorant and naïve that they should all be replaced.”

The Cybersecurity specialist believes that based on the presented evidence the hack “cannot possibly be an organized nation-state.”

“The hack on the DNC used a piece of malware a year and a half old and there have been many updates since then, McAfee said. “This was done by an independent one person kid that downloaded the software. Please, this is not an organized hack and certainly not a nation-state that did this.”