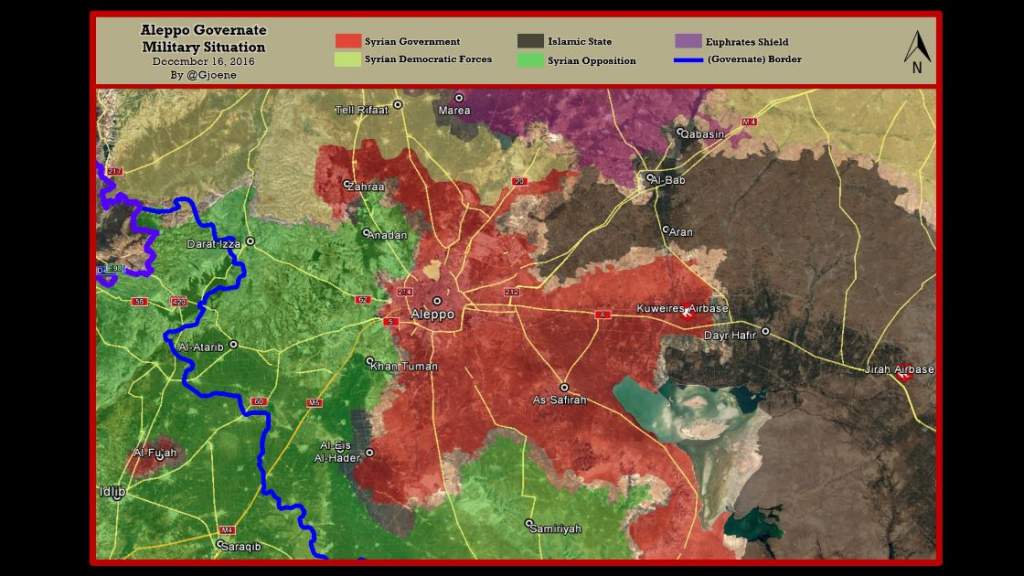 The Arab Army, with a strength of 125 000 soldiers, fighting since nearly six years against 200 000 so-called “insurgents” who are in fact 90% of the Islamist mercenaries armed, trained and paid for by foreign Governments and their intelligence services.

At the beginning of this war of national defense, the Syrian Arab Army has committed a series of errors that allowed mercenaries to get their hands on 1/3 of its combat equipment and 45% of its ammunition depots. The Syrian Arab Army has lost more than 40,000 troops who could not be replaced by voluntary reservists, since 75% of the national territory had been occupied by the Islamists.

Subsequently, especially with the arrival of the Iranian instructors, Hezbollah and the Russians, and the delivery of modern combat equipment, the effectiveness of the Syrian Arab Army has increased exponentially [[1]]. During the liberation of the city of Aleppo by the Syrian army, a key role was played by Russian special forces – Spetsnaz operations [[2]].

Although the Syrian Arab Army has regained the initiative and launched an offensive in several directions, she is not yet able to put an end to the war of national liberation, by a quick victory. The reason for this is the dispersion of large units of the Syrian Arab Army on several fronts. Therefore, the balance of forces is still in favour of the Islamists. Despite the fact that they have lost close to 100,000 men, killed in Syrian and Russian air raids and ground fighting, they still receive many recruits introduced by the border not controlled by the Syrian army.

Mercenaries form groups in different parts of Syria, where they dug a maze of hundreds of kilometres of galleries, tunnels, shelters and bunkers camouflaged by the vegetation that serve as warehouses of food, fuel, ammunition and ammunition production workshop. In these underground shelters hide also heavy weapons and tanks and artillery [[3]].

Many of these terrorist groups could not be surrounded by the Syrian army and could continue to receive arms, ammunition and recruits from outside the Syria. Al Manar [[4]], based on articles from the international press, has published a statement of situation of terrorist groups other than the Islamic State and units Kurdish, as well as the areas where they operate.

We find, in the South of Syria (Daraa governorate) and the region of Quneitra, active groups of the South Front and the movement Islamist al-Muthanna, allied to the Islamic State. Both have been created and funded by the center of military operations from Amman (Jordan), subordinate to the CIA.

After having eliminated Kadhafi, MI6, the CIA and the DGSE would have brought mercenaries from the Libya, to train them in military bases in Jordan and Turkey to the specific conditions of the Syria. These groups control a large part of the Jordanian-Syrian border are composed of 38000 mercenaries. 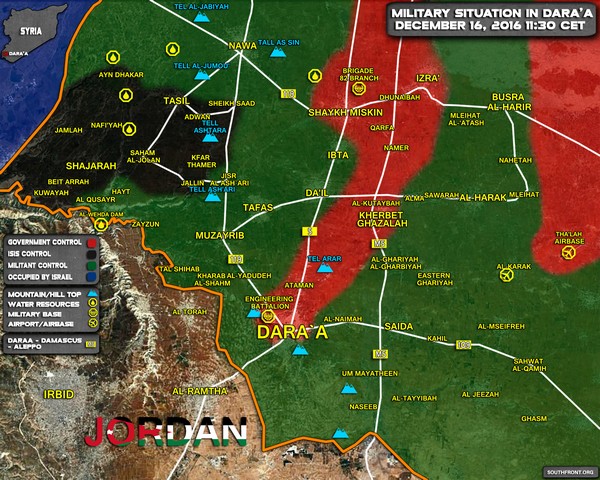 In the suburbs of Damascus, and to the East of the desert area of Qalamoun, operate groups of Islamic mercenaries of the Legion al-Rahman, Jaish al-Islam and the Brigade of the Martyrs of Islam created and financed by Saudi Arabia and the Qatar. 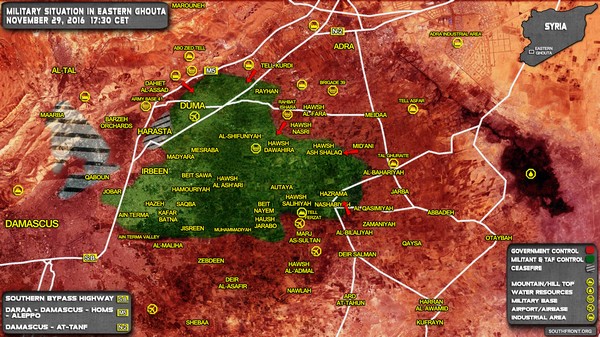 Founder of Jaish al-Islam, Zahran Alloush, was killed in a Russian air raid. These two groups in the center of the Syria totaling 40 000 fighters.

In the governorate of Aleppo in the North of the Syria, we find the Front of the Levant (Jabhat al-Shamiyah), which frequently uses American anti-tank Tow missiles provided by the Saudi Arabia, introduced through the border with the Turkey. Always in the Northwest of the governorate of Aleppo, there are group Nour al – Din al-Zenke paid and armed by the CIA through the center of military operations from Amman. 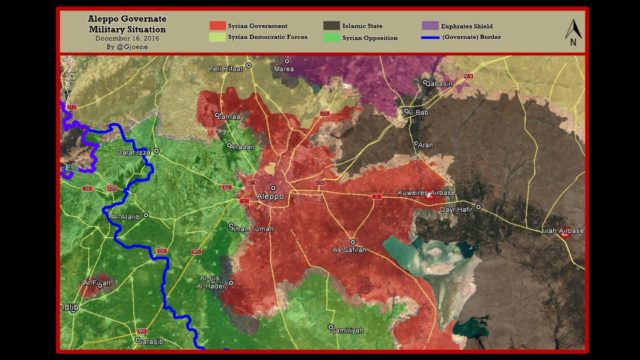 In Idlib governorate, in the North-West of the Syria, there is the Brigade of Falcons of the mountain, formed in Saudi Arabia and the Qatar. Command of the brigade is provided by officers of the special forces of some Western countries and the Arabian peninsula, the flow of information is provided by the CIA through a center of military operations in Turkey.

The brigade operates in cooperation with the al-Nusra and Syrian Ahrar al-Sham, against the Arab Army. Idlib governorate in the 13th division, equipped with Tow anti-tank missiles and completely funded by the Qatar and Saudi Arabia. The most powerful group in the Idlib governorate is Ahrar al-sham, funded by Saudi Arabia and with instructors of the special forces of some Western countries.

There is also the al-Nusra (the Syrian branch of Al-Qaeda). The al-Nusra is supported by the United States and Britain. The mercenaries in the governorate are 29 000 and totally control the border with the Turkey.

In the governorates of Aleppo and Hama, we find the North Division, which cooperates with the Group Jaish al-Nasr and another group the Legion Sham / Faylaq al-Sham. The Sham Legion units participated in operation shield of the Euphrates in northern Syria, alongside the Turkish army. The three groups include more than 10,000 mercenaries. 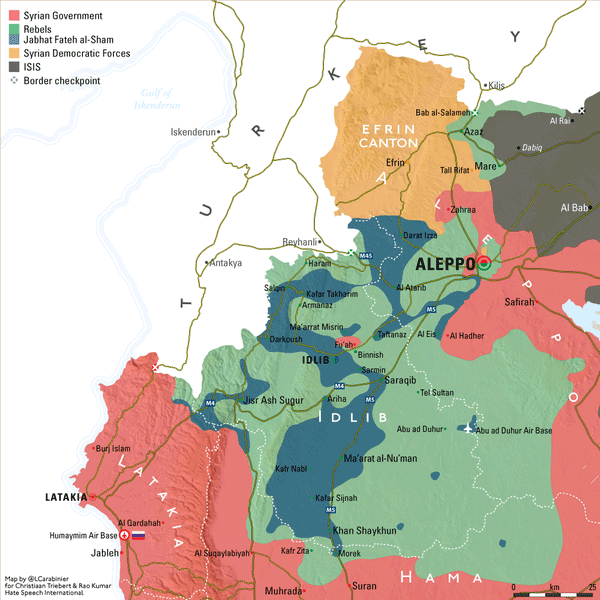 In Idlib and Latakia governorate is the 1st Division, consisting of 2800 mercenaries, armed with anti-tank weapons provided by the United States. Latakia has also the Turkmen Syrian army (STO)), supported by Turkey, with a membership of 5000 fighters.

The algorithm of steps to improve relations with the Turkey applied by the president Vladimir Poutine, after the attack on the Russian bomber Su-24 by Turkish aviation, has led to the reopening of the construction projects of the Turkish Stream pipeline and construction of Turkish nuclear power plants, and support for the president Erdogan during the military coup of the summer 2016 [[5]].

It is clear that the Russia, instead of going to the confrontation, tried to align Turkey to its policy towards the Syria. If the presidents Putin and Erdogan fall on an agreement on the future of the Syria, the change in the balance of forces for the support of the Syrian Arab Army could come from the Turkey.

President Recep Erdogan could prohibit training and entry into the governorate of Idlib in Syria of mercenaries recruited by MI6, the CIA, the DGSE and the GID of the Saudi Arabia, from the border of the Turkey and Aleppo. At the same time, the Turkmen Syrian army, supported by Turkey, should rally the Syrian Government and the Turkish army could launch cooperation on a large scale with the Syrian army.

The 7th and 2nd Corps of the Turkish army could take over of the Syrian Arab Army for control of the North of the Syria to isolate and stop any movement of the Islamic State or the Kurdish units. This would allow the 2nd and 3rd Syrian Arab army corps (divisions 1, 3 and 11 tanks, Division mechanized 4, 10, 14, 15 brigade and special forces Tigers) to focus on a single operation, the cleaning of the North, Center and West of Syria (governorates of Aleppo, Idlib. Hama and Homs) mercenaries.

This operation would be completed in four months at the most, i.e. exactly at the time where it is expected that the Iraqi city of Mosul would be released from the Islamic State. 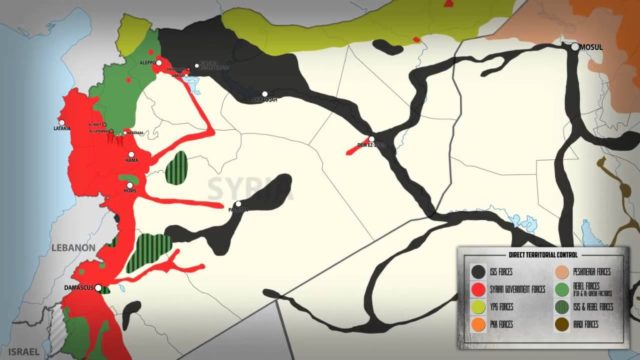 In June 2017, a new large-scale operation could be triggered for the elimination of the Islamic State in Syria and Iraq, an operation in which the Syrian army would be supported by the Russian contingent, Hezbollah, the Iran, the Turkish army, the Iraqi army, the operation being coordinated by the Russia.