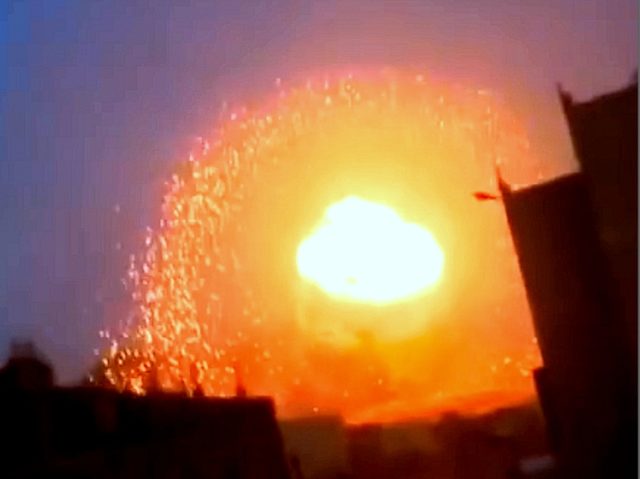 The war in Yemen is simple. Saudi Arabia and its allies are protecting the Arabian Peninsula from occupation by Iran and other terrorist nations. Few actually believe this fantasy though “officially” Morocco, Egypt, Jordan, Sudan, Kuwait, Bahrain, Qatar and the UAE are at war with the Houthi backed “color revolution” that overthrew the Saudi backed Hadi regime. Hadi fled Yemen for Saudi Arabia in March 2015 after a popular uprising sent him “home to mama.”The context here is important in light of what has transpired in Aleppo since the terrorist groups that occupied that city have been expelled. There, we found not only arms from a number of nations, the US is mentioned prominently, but chemical weapons production facilities as well.

Additionally, after weeks of MSM (Main-Stream Media) “fake news” reports of Syrian government atrocities in Aleppo, the truth is getting out, the US backed “rebels,” led by what was then called Jabat al Nusra, the Saudi backed al Qaeda franchise for Syria, maintained a reign of terror in Aleppo during the entire occupation. Mass graves are now being exposed, people are coming forward and the MSM and their “fake news” are again discredited until “next time.”

Why this applies to Yemen isn’t simple but it is also not too complex for the “fake news” to either spin or ignore or for governments to keep from their own people. As with Aleppo, Yemen is inundated with evidence of the use of illegal weapons, cluster bombs, chemical munitions, admittedly supplied by the US and Britain.

In fact, the real coalition there is quite different than we are told, and includes not only NATO but Israel. More than that, the Emirates have turned to the Colombian drug lords, long their investment partners, who have supplied mercenaries who now fight in Yemen alongside al Qaeda and other Saudi backed groups. From Reuters:

“If Islamic State’s capital is the Syrian city of Raqqa, then al Qaeda’s is Mukalla, a southeastern Yemeni port city of 500,000 people. Al Qaeda fighters there have abolished taxes for local residents, operate speedboats manned by RPG-wielding fighters who impose fees on ship traffic, and make propaganda videos in which they boast about paving local roads and stocking hospitals.

The economic empire was described by more than a dozen diplomats, Yemeni security officials, tribal leaders and residents of Mukalla. Its emergence is the most striking unintended consequence of the Saudi-led military intervention in Yemen. The campaign, backed by the United States, has helped Al Qaeda in the Arabian Peninsula (AQAP) to become stronger than at any time since it first emerged almost 20 years ago.

The issue of the mercenaries from Colombia is even more colorful. In 2015, “the Emirates” according to the New York Times and other “MSM,” sent “troops” to Yemen. What is not said is that these “troops” are not Colombian Army but CIA “auxiliaries” who have been used across the region as “support” and “security” for drug operations, the CIA’s longtime cocaine franchise that gave rise to the crack epidemic that destroyed America’s cities according to Gary Webb and Mike Ruppert, “suicided” whistleblowers. Ruppert, a longtime friend, is described in this hit piece by Matt Stroud:

“Then, Ruppert read a story that would change his life. It was a groundbreaking investigative report — a series of articles connecting the CIA to Nicaraguan drug runners. Published in August 1996 in the San Jose Mercury News, Gary Webb’s three-part series, “Dark Alliance,” provided compelling evidence that drug traffickers peddled cocaine on Los Angeles streets to fund CIA-supported Contras embroiled in a Nicaraguan civil war. The series’ assertions — that CIA officials aligned themselves with criminals and “helped spark a crack explosion in urban America” — inspired protests in black communities nationwide.”

Stroud writes of Ruppert and Webb as cranks and nutcases but those who know history also know that the CIA cocaine connection was outlined in the Iran Contra hearings and led to the indictment and conviction of 47 top Reagan associates, almost all later pardoned by Bush 41.

What else isn’t told is that these drug lord mercenaries are almost all “flight restricted” but that they were allowed to fly commercial airlines through the United States, in and out of London Heathrow and straight into Dubai where companies like Dyncorp and L3Communications outfitted them to fight in Yemen alongside al Qaeda.

This should be no surprise either. In Syria, Saudi Arabia has been al Qaeda’s sponsor though Jabat al Nusra now trying to rename itself as Jabat an-Nusrah li ahli ash Sham, (loosely translated as “Saudi cash, CIA guns and Israeli advisors”)hoping that CIA/Saudi/Israeli terror groups with even more “pithy” names might seem less obvious.

In Yemen, however, the insanity goes further, much further, as pointed out by this Pravda report:

“Saudis have begun to wipe Yemen off the map. Tactical strikes have hit the city. Shocking video reveals proton bombardment from a neutron bomb. Israel is reported to be the one to deploy such neutron bombs. Any doubts about the nuclear attack on Yemen attributed to Israel, as evidenced in two Israeli F16s shot down and forensically identified, are now gone. Forbidden strikes have brought about a storm of worldwide protest. Obama has recently promised to provide every assistance including US military force to any “external threat” the rich Arab states of the Gulf may face.”

The Pravda report is based on a VT expose in 2015. Former IAEA (International Atomic Energy Agency) inspector, Jeff Smith, a nuclear physicist and VT editor, was the first to discover the nuclear attack on Yemen. Smith explains how a simple video provided proof acceptable to the IAEA:

“The combination of the cameras plastic lens and the photoelectric effect produced in the cameras CCD pick up chip (because it is basically a very large array of photo diodes) allows them to act as very good detectors of high level ionizing radiation. Low level radiation in this case is not of concern because it will not immediately kill you or have long term negative health effects.

By simply pointing the camera at an explosive event it will immediately determine if it is nuclear or not. When the camera’s CCD pick up chip is overloaded by excess radiation it will pixelize showing white sparkles all over the picture of the fireball or blast image area.”

Smith supplied a frame-by-frame analysis of the explosion, citing not only radiation, but a telltale nuclear flash whose duration and nature allowed rough approximation of the type of weapon used and the size of the fuel or “pit” that made up the core of the device.

With Pravda reporting two Israeli planes shot down over Yemen and IAEA sources reporting a 30 year old Saudi nuclear program as well, the nuclear event over Yemen in 2015, is no surprise, nor is the press blackout on this event.

What continues to surprise, a term based on expectations that there is real journalism and that governments and international agencies are not all hopelessly corrupt, is that the war in Yemen, one that deeply parallels the war in Syria, can go on silently, year after year.

Israel partners with Saudi Arabia. Both or either use nuclear weapons, perhaps several times, while America supplies refueling aircraft and targeting, all on behalf of al Qaeda, just as the US has been accused of by Russia in Aleppo.

What is important is the cast of characters, the same faces we see time and time again, in Afghanistan, running drugs through the Balkans, through Mexico into the US, the same cardboard lotharios like al Qaeda and the Israelis, like NATO and Saudi Arabia.

What we may well have is a blurring of lines, proving that non-state players and nation states are, in fact, one in the same and that the surrogate warfare that puts drug lords into Asia fighting for Israel or Saudi Arabia, backed by the use of nuclear weapons, may well be an enemy of old in a new guise.

Here would be a suggested hypothesis; let us assume that, just for argument’s sake, the evildoers and madmen of recent times, the Kaiser, Hitler, Stalin, even John Kennedy, had something very basic in common, their hatred of what is misnamed “central banks,” but is in actuality better termed absolute control of all currency and trade by the Rothschild family.

Power being such as it is, and war being the same, not expressions of “politics” but rather “economics,” then wars were, are and will be fought on behalf of the controlling forces, which might well be named, for argument’s sake, as I had said, a conspiracy of international “bankers.”

Were one to analyze “fake news” or “controlled news” or even “false historical narrative,” one would find a single overriding issue and that is a need to damn those who identify a single financial cabal as behind all war and social strife in the world. Thus, any who look at terrorism and extremism and, after peeling away the veneer, find other forces at work, tend to find themselves targeted.

Yemen may well be the key, nuclear weapons, al Qaeda, Saudi Arabia and Israel hand in hand with little effort to conceal any of it.