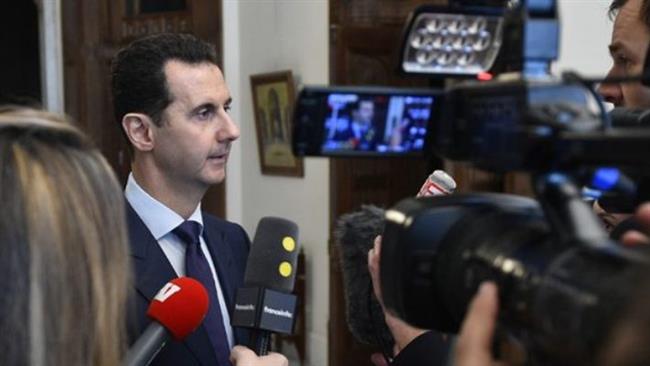 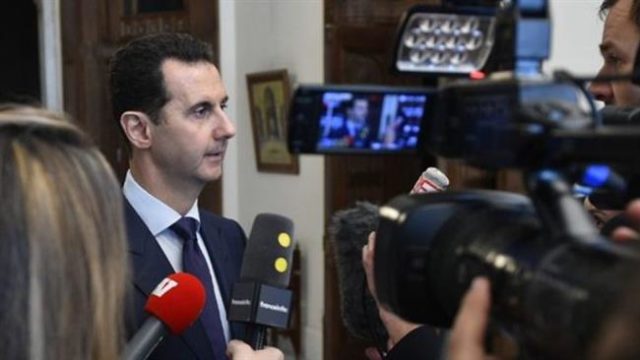 [ Editor’s Note: Assad has gotten out in front of the upcoming peace talks. Despite the ongoing process to negotiate moving foreign jihadis to Idlib province, to facilitate the evacuated areas to begin rebuilding and their residents returning, he is in no way planning to allow Idlib to be set up a Jihadi Disney World inside Syria. He has closed that door by stating that all of Syria must be “liberated”.

Assad has also skillfully slipped in a precondition that while his status is “open”, that any changes have to be constitutional ones, meaning that he will abide by a referendum vote on his status but not let a peace conference decide.

He is using the constitution for what it was meant for, and he has Russia’s consistent backing via its long declared opposition to all unconstitutional regimes changes.

This of course put him at eternal odds with the West and NATO, where regime change is something they feel is included in Western constitutions, in invisible ink.

And lastly, Assad has thrown out a major curve ball in stating that he will only be negotiating “everything” with opposition parties that have a grass roots basis among the Syrian, people. So that would seem to put groups like the Saudi rump group one, the High Negotiating Committee (HNC). out of the picture, when we all know they would only be participating anyway to disrupt the talks.

With this position Assad has refocused attention on the Western and Gulf State proxy terrorist coalition, and put it front and center as the major threat to a peace settlement, and in effect saying that he will not be negotiating with terrorists and their supporters.

This is a great way to start out the new year, and Assad will have a lot of worldwide grass roots allies to fight against the fake democracies involved in doing what the Nazi brass were hanged for at Nuremberg, “waging an offensive war”… Jim W. Dean ]

Syria’s President Bashar al-Assad says the armed forces will fight until the liberation of “every inch” of the homeland from militant and extremist presence.

Assad made the remarks in a statement given to French media, the full version of which was published by the official Syrian Arab News Agency on Monday.

Assad had been asked whether the country had any plans to liberate Raqqa from the Daesh Takfiri terror group, which has named the northern city as its so-called headquarters in the Arab country.

“We do not consider that (retaking Aleppo from the militants) as a victory because victory will be when we have eliminated all the terrorists,” Assad said, adding however, that “it is a critical moment in this war because we are on the path to victory.”

‘Everything can be negotiated’

He also said that the Syrian delegation was prepared “to negotiate everything” in the upcoming talks with the opposition, which is to be held in the Kazakh capital of Astana with the mediation of Russia, Turkey and Iran.

Asked if the government was ready to discuss Assad’s position as president, he said “yes, but my position is linked to the constitution.”

“If they want to discuss this point, they must discuss the constitution,” he said.

The Syrian head of state also said any constitutional matter should be put to a referendum, adding that he would willingly step down if the results of a public referendum on his continued tenure obliged him to do so.

Late last year, the Syrian army managed to liberate the eastern sector of Aleppo, the country’s second-largest city, which had fallen to Takfiri groups back in 2012.

Government forces later secured the evacuation of remaining civilians and armed groups from the city under a ceasefire deal with the militant groups, brokered by Russia and Turkey. The Aleppo deal set the stage for a landmark all-Syria truce deal between Damascus and foreign-backed militant groups operating in the country.

The diplomatic achievements were made following high-level trilateral talks involving Russia, Iran and Turkey over the Syria crisis in Moscow. President Assad had earlier hailed the victory in Aleppo as “history in the making” and “a huge step” in bringing the war in Syria to an end.

‘Opposition should be genuine’

Assad, however, insisted that the opposition side attending the Astana talks had to have “grassroots in Syria, not Saudi one or French one or British one – it should be Syrian opposition to discuss the Syrian issues.”

The West, mainly the United States, and the Persian Gulf monarchies of Saudi Arabia and Qatar have been generously supporting the militants fighting against the Syrian government in the hope of ousting Assad. Tens of thousands of the militants are foreign nationals.