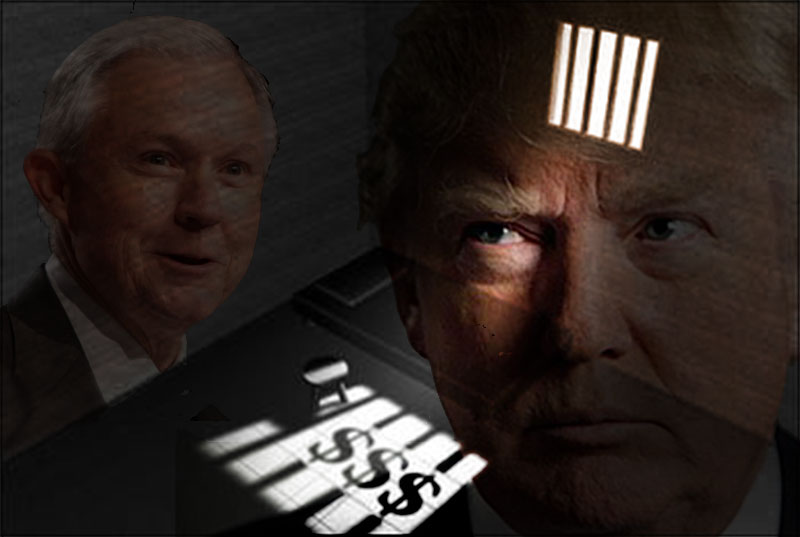 In the hardened desert hamlet of Milan, New Mexico, incarceration is the biggest game in town.  Profits Baby!

Not far from Interstate 40, among fragrant sage and creosote bushes, stands a sprawling outpost of CoreCivic Inc., one of America’s biggest for-profit prison companies. The 1,200-bed facility, formerly a lockup for car thieves and drug dealers, is being transformed into a concentration camp for undesirable undocumented workers fleeing Mexico and Central America. It will be opening just as Donald Trump becomes our bigly U.S. Precedent.

Immigrants are a growth business for Milan and the U.S. prison-industrial complex. Trump’s pledge to clamp down on undocumented workers and deport millions has given the private-prison industry its biggest boost in years. Since the Faux-Republican was elected, CoreCivic stock has jumped 78 percent. 78%!  Damn!  Profits Baby!  Even rival private-prison company Geo Group Inc., is up 53 percent.  That’s how to make money ya’ll!

The reasons are clear. A crackdown like the one Trump has proposed would cost the U.S. Taxpayers $600 to $ 800 billion. Prison contractors would get big a slice of that concentration camp pie! Judge Arpio?  Bet he’s looking to be warden of those Gestapo camps!  Heil!

“You can anticipate a massive enhancement of the use of the criminal-justice system to combat immigration,” said John Sandweg, former acting director of U.S. Immigration and Customs Enforcement. He and others drew comparisons to the nation’s decades-long war on illegal drugs that led to mass incarceration.

Sessions, a long time openly racist anti-civil rights hero only denounced the KKK when he found out they smoked pot!  Yeah! Pot was his bridge too far.  Lynching Niggers?  No problem!  But dam, smoking that evil weed and he just could not love the KKK.   Heck, his family chose to name him after Confederate leaders Jefferson Davis and Beauregard what’s his name.  The guy is a total racist from a family of racists!

Anyways, just a few months ago, the outlook wasn’t so bright.

An August report from the U.S. Department of Justice recommended phasing out prison contractors because of poor performance, insufficient cost savings and falling inmate population. The agency found that private prisons were more dangerous and less hygienic than government facilities, citing higher instances of assault, inappropriate use of solitary confinement and inadequate medical treatment.

With marijuana legalization and Congress’s easing of drug sentencing causing the first prison-population decline in three decades, it looked as if the government’s experiment of outsourcing the incarceration business was drawing to an end.

Nashville-based CoreCivic, formerly known as Corrections Corp. of America, announced it would idle the Milan facility, putting 300 jobs on the line. So important was the prison to the community of fewer than 13,000 that New Mexico’s Democratic U.S. Senator Tom Udall wrote a letter urging the Obama administration to reconsider.

But then along came Trump!  The king of profits on the backs of humanity!  Screwing the kids on education at Trump University for $ 175,000,000.  That was nothing!  Just wait till he gets his hands on these spics right?  $ 800 billion paid for the taxpayers?  How much will go into the hands of his billionaire buddies?  Wow, this is going to be way better than Adolf Hitler!

Hitler was an idiot.  He did it for ideological reasons.  Dumbass!  Trump don’t give a rats ass about ideology! To him, it’s all about business and profits!  He would gas them all if it paid but keeping alive in perpetual detention?  Now that’s where the money is at!

Anyways, a few weeks later, CoreCivic signed a new contract with the Department of Homeland Security, which has said it’ll continue to use private contractors to house immigrants despite the Justice Department findings.

“Geo’s political activities focus entirely on promoting the use of public-private partnerships,” spokesman Pablo Paez said in an e-mail statement.

Jonathan Burns, a CoreCivic spokesman, said the company has provided “flexible, innovative solutions” to the challenges facing government. “CoreCivic does not draft, lobby for, promote or in any way take a position on proposals, policies or legislation that determine the basis or duration of an individual’s incarceration or detention,” he said.

The private-prison industry sprang from the early days of President Ronald Reagan’s drug war. The 1986 Anti-Drug Abuse Act prescribed mandatory minimum sentences for small amounts of crack cocaine. Between 1980 and 2013, the federal prison population increased by almost 800 percent, according to the Justice Department, and the government turned to private contractors to alleviate overcrowding.

Today, the U.S. houses nearly 23,000 federal inmates in private prisons, or about 12 percent of the total. The agency predicted in August it could shrink to fewer than 14,200 by next year under the new policy.

As the drug war fades, private-prison companies have shifted to the immigrant-detention business, a trend that accelerated after the terrorist attacks of Sept. 11, 2001. Laws on the books requiring mandatory detention of immigrants facing deportation have been interpreted more broadly. The government prosecuted more immigrants criminally for what used to be civil offenses.

The value of contracts awarded to Geo and CoreCivic by the Homeland Security Department, which oversees facilities for immigrants, increased 20 percent since 2009. At the same time, the companies’ contracts from the Justice Department, which handles federal crimes, declined 40 percent, according to data compiled by Bloomberg. Geo is the biggest ICE vendor, with $900 million in contracts since 2013; CoreCivic, with $330 million, is third.

At least three private prisons that lost their contracts with the Justice Department during the summer, including Milan’s Cibola County Correctional Center, have won new contracts to house immigrants.

“The immigration law-enforcement regime is as strong and heavy-handed as it has ever been,” said César Cuauhtémoc García Hernández, assistant professor at University of Denver Sturm College of Law who studies immigration and criminal justice. “President-elect Trump has promised to throw that into overdrive.”

As part of his “100-Day Plan To Make America Great Again,” Trump said he would work with Congress to build a southern border wall and establish two- and five-year mandatory minimum prison sentences for illegal re-entry into the U.S.

A five-year minimum for the offense would expand the federal prison population by 65,000 prisoners, which would require the government to build more than 20 prisons, according to a 2015 American Bar Association letter to Congress.

Trump’s immigration proposals may provide opportunities for corrections companies to profit twice. After immigrants serve a prison sentence for the criminal offense of illegal re-entry, they’re often transferred to immigration officials who lock them up again, sometimes in facilities run by the same company, until they’re deported.

In recent months, border crossings have skyrocketed — in October, 46,000 people, 40 percent more than the previous October -– partly because of worsening conditions in Central America. Also, Trump’s election has given human traffickers in the gang-weary region a new sales pitch: Go north before a more hard-line U.S. president takes office.

Saulo Padilla, an immigration advocate based in Goshen, Indiana, said he recently phoned his niece in Guatemala. She told him she was thinking of coming to the U.S. before Trump’s term begins. Padilla said he replied that even if she completed the 1,200-mile (1,930-kilometer) trek before Inauguration Day on Jan. 20, she’d have a good chance of ending up detained under Obama just long enough to be handed over to Trump.  Padilla told her to stay home.