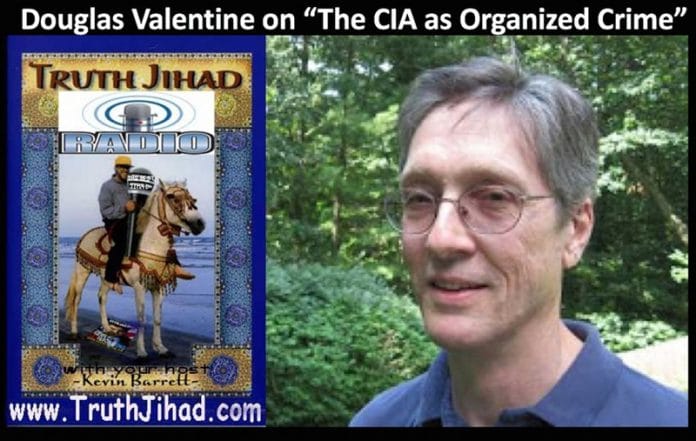 For only $3.95 a month you can listen to shows on-demand before they are broadcast – and also get free downloads. Help Kevin keep these shows on the air – become a subscriber today!

First hour: Douglas Valentine, who was introduced to many CIA veterans by ex-director William Colby,  has exposed Operation Phoenix and DEA-CIA corruption in previous books. In his new book The CIA as Organized Crime, Valentine argues that calling CIA drug-running and other illegal activities “corruption” is inaccurate, because those activities are in fact the Agency’s real mission. The CIA, Valentine asserts, is “the organized crime branch of the US government.”

“Golitsyn predicted that, in the end, communism would vigorously return, and that ‘all the totalitarian features familiar from the early stages of the Soviet revolution and the postwar Stalinist years in Eastern Europe might be expected to reappear.’ For a long time, I awaited that rebirth of Russian communism. I initially viewed Vladimir Putin with strong suspicion. The persistent question on my mind has been: ‘Is he the real deal?’ Many of us in alternative media have become cynical to the point of believing that no major world leader can ever emerge without being a lackey for the Rothschild-run New World Order. Instead, a very different scenario has unfolded. It is the United States that is descending into communism (via creeping socialism), the police state (via the Patriot Act, NSA spying, etc.), and anti-Christianity…”