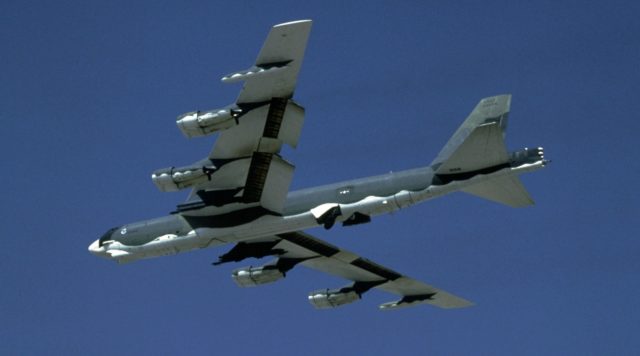 More than 20 civilians were killed in a B-52 strike carried out by the US on the Idlib province in Syria on January 3, according to Russian Chief of the General Staff Valery Gerasimov.
Gerasimov slammed the Western coalition in Syria for failing to achieve “any meaningful results,” adding that “at the same time, significant numbers of victims among the civilian population and government forces were reported.”

“As we remember, in September last year, the US aviation carried out an attack in the Deir-ez-Zor targeting government forces. After this attack, Islamic State started its advance,” Gerasimov said as cited by RIA Novosti news agency.

“The latest example of this is the January 3 airstrike, when a B-52 bomber – without warning the Russian side – hit a target in the town of Sarmada, Idlib Province, which is covered by the cessation of hostilities agreement. Over 20 civilians died as a result of the airstrike.”

He did not provide any further details.

The US Defense Department announced on January 6 that a strike had killed 20 people in Sarmada, Idlib; those killed were described as Al-Qaeda militants, AFP reported.

The September airstrikes by the US-led coalition killed 62 and injured 100 Syrian soldiers near the Deir ez-Zor airport, a vital supply conduit for the enclave besieged by Islamic State (IS, formerly ISIS/ISIL) forces.

In November, US Central Command described the incident as an “unintentional, regrettable error,” which was “primarily based on human factors.”

Russia was notified of the planned strike via the “de-confliction” hotline, but was given the wrong location, said Brigadier General Richard ‘Tex’ Coe, who headed the CENTCOM investigation.

When Russian officers called the hotline to report the strikes were targeting Syrian positions, they were kept on hold for 27 minutes because the US officer who was the designated point of contact was not available. The bombing continued in that interval, according to Coe, and stopped once the Russian message went through.

During the Tuesday meeting, Gerasimov said the operation carried out by the Russian Air Force since September 30, 2015 “has turned the tide of the Syrian war.”

Since the beginning of its operation in Syria, Russia’s military jets destroyed around 200 illegal oil-extracting facilities belonging to IS, 174 oil-producing plants, 111 groups of oil tank trucks, the head of General Staff added.

“This allowed not only to breach the IS supply system, but also to deprive them of their main income,” Gerasimov added. “All strikes are carried out only after the confirmation of data from several sources, including the space intelligence and drones,” Gerasimov emphasized.