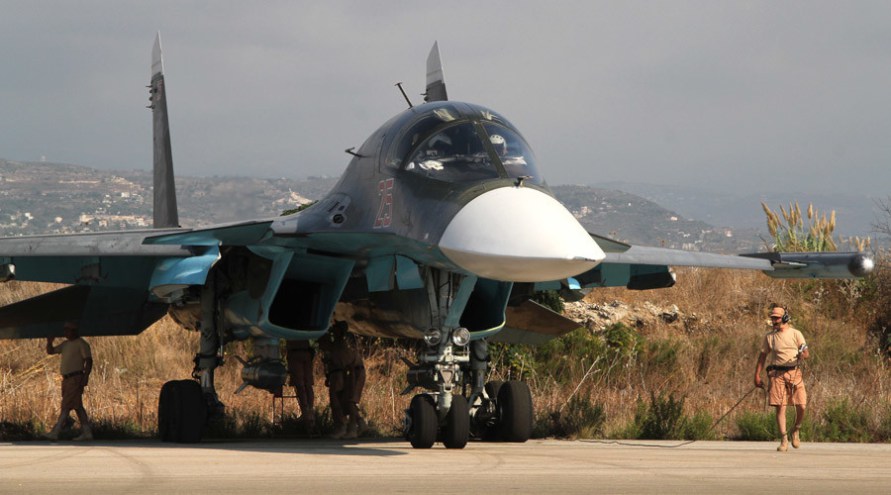 Attempting to deduce the reasons behind Russia’s involvement in the conflict in Syria, we run into a number of unknowns. First, why were Russian planes in Syria that could have been equipped with 8–24 missiles or bombs furnished with only two bombs or missiles, all of them “smart” (KAB-250 S/LG, KAB-500 L/Kr, KAB-KAB-1500 L, 1500 K, Kh-29 L/T, Kh-25 T), guided by laser beam, GPS and TV/IR?

These weapons are accurate to within 2–5 m. It is also unknown why the Russian fighter-bombers were sometimes kept in the air for an hour until the last Syrian civilian was removed from the target area.

Don’t forget that the American B-52 bombers carpet bombed Vietnam, burying combatants along with the inhabited localities around them, and the US A-1 Skyrider, F-100, F-105, F-4, F-8, a-4, a-6, a-26 and B-57 planes dumped thousands of loads of napalm on Vietnamese villages. The procedure used by the Russians in Syria is one that is only used by an air force defending its own territory.

It’s also unclear why Russia decided to intervene only in October 2015, almost four years after the war began in Syria, when 75% of the territory of the nation had been occupied by Islamist rebels. In February 2014, the coup d’état took place in Ukraine, supported by the West and dubbed “Euromaidan,” followed by Crimea’s accession to Russia by referendum in March 2014 and the outbreak of the civil war in eastern Ukraine.

The US, the EU and nations loyal to the United States instituted an economic embargo against Russia. In September 2014, during the summit in Wales, NATO decided to develop new defensive capabilities on the border with Russia. This took the form of relocating Brigade 3 tanks from the American 4th Division, to the Baltic countries and Poland (87 Abrams M1A1 tanks, 20 self-propelled M109A6 Paladin howitzers, and 136 M2 Bradley infantry fighting machines). To this is added the 10th Aviation Brigade (50 UH-60 Black Hawk helicopters, 10 heavy transport CH-47 Chinook helicopters and 24 AH-64 Apache attack helicopters).

In the Gulf War, the Americans formulated a new seek-and-destroy algorithm to penetrate into the strategic depth of the enemy’s defenses. After American aviation secured aerial superiority, American fighter-bombers shifted to neutralizing, with high precision, Iraqi armored vehicles along the fortified lines for counterattack and the armored vehicles along the counteroffensive lines, using the second tier and the reserve of large tactical-operative units.

Simultaneously with this, the attack helicopters of the American Army and Marine Corps succeeded, together with the batteries of 155mm caliber Paladin M109A6 self-propelled howitzers, in neutralizing brigade artillery groups, divisions, and formations of the first echelon of the Iraqi army.

The precise location of Iraqi targets was obtained via the American Army’s complex reconnaissance program based on — in addition to satellite data — four levels of ISR (Intelligence, Surveillance & Reconnaissance), collecting and processing data in order to formulate a complete picture of the theater of operations on the ground.

The third level of ISR consisted of manned prop planes, like the Cessna Caravan 208B, C-23A Sherpa, C-12R Horned Owl and the C-12 MARSS-II King Air. The fourth level was made up of a fleet of helicopters from the 12 aviation brigades of the US Army (OH-58D Kiowa Warriors and AH-64 Apaches).

Through the combined action of the American seek-and-destroy             systems, the Iraqi combat structure was disrupted, creating large corridors permitting the penetration of mechanized or tanks units.

To pierce deep within the defenses and surround the flanks, they used not so much the M1A2 Abrams tank, M2 Bradley infantry fighting vehicle, or AAV-7A1 marine infantry fighting vehicle — all slow-moving tracked vehicles — but rather gave preference to LAV-25 Stryker motorized units equipped with armored personnel carriers (which can reach a speed of 100km on the highway) made up into Stryker brigades.

Starting in 2012, the Russian army converted 7–10 motorized brigades in accordance with the American Stryker model, based on BTR-80 and BTR-82A amphibious armored personnel carriers. Over the next 2–3 years, the BTR-80/82A will be replaced with new the VPK-7829 Boomerang.

In Syria, the Russian Su-25, Su-24, and Su-34 fighter-bombers and those of the Syrian air force created breaches in the rebel battle formations, striking their ammunition and fuel reserves and mobile combat equipment (such as tanks and towable artillery pieces), and also their armored fortifications.

Russian Mi-24V and Mi-28N attack helicopters eliminated from the rebels’ defense arsenal Toyota pick-up trucks armed with machine guns, rocket launchers and portable anti-tank rockets (from the counter-offensive arrays) and vehicles loaded with explosives for suicide attacks. Through these breaches they brought in Russian BTR-82A armored personnel carriers, considered to be highly advanced given their great maneuverability in unobstructed terrain, and their fire power from turret-mounted 30mm cannons.

For their protection, along with the BTR-82As there were some Russian T-90A tanks equipped with the Shtora active defense system which renders useless the American TOW-2 anti-tank missiles. And it can’t be ruled out that Russia will also send Syria its new types of armored vehicles (the T-14 Armata tank, the T-15 and Kurganets-25 IFVS), which are in the test phase now — the most advanced tanks as of today.

In Syria, the Russian army has created a strong component of C4I reconnaissance (Command, Control, Communications, Computers, Intelligence and Interoperability) for its search-and-strike system. The collection and processing of data has been stratified on many levels, just as it is in the US Army.

Since the anti-Islamic State coalition led by the US (which includes NATO and the Arab Gulf States) had aircraft operating in the airspace of northern, central and eastern Syria, according to statements by General Philip Breedlove, the former NATO commander in Europe, the Russian air and land forces created an exclusion zone (A2 / AD bubble) in western Syria, barring NATO forces. Within the exclusion zone, Russia implemented a set of security measures by which it secured primacy in the radio-electronic war (Electronic warfare – EW) against the land, air and space reconnaissance systems of the anti-Islamic State coalition.

The area became opaque to the Coalition’s reconnaissance due to the Russian Krasukha-4 equipment, which jams radar surveillance from American spy satellites of the Lacrosse / Onyx families, ground based radars, AWACS and other airborne radar systems like the E-8C, RC135, Sentinel R1, and those mounted on unmanned planes such as the RQ-4 Global Hawk, MQ-1 Predator, and the MQ-9 Reaper.

The Russian planes were equipped with SAP-518/ SPS-171 and L-175B Hibini jamming pods, while the Mi-8AMTSh helicopters were outfitted with Richag-AV jamming systems. Other jamming equipment that Russia has sent to Syria can disrupt and cancel flight commands, from a distance, to drones executing reconnaissance in the airspace of western Syria, or it can generate countermeasures, in the visible spectrum, infrared or laser, against the Americans’ electro-optical aerial or cosmic surveillance (imagery intelligence, IMINT). Inside the zone of exclusion in Syria, Russia has also deployed Su-30 SM and Su-35 intercept jets along with S-400 long range anti-aircraft missiles.

Thus, the deployment of the Russian air and land forces in Syria was also a consequence of the Obama Administration’s measures with regard to Russia, especially the increased NATO aggression close to Russia’s borders. It has not only served to support Bashar Al Assad’s regime but has spurred Russia’s military preparation with a view to repelling the eventual NATO invasion of Russia desired by the Obama Administration.

But it also served to test certain essential components of the new strategic search and strike system of the Russian army. This system had not been tested until now, under field conditions, in combat. The system that was copied from the American one has been adapted to the specific needs of the Russian army, and that is to defend Russia in the event of a NATO invasion.