Thorne Dreyer, Alice Embree, and Richard Croxdale, editors of the highly-acclaimed new book, Celebrating The Rag: Austin’s Iconic Underground Newspaper, speak and lead a public discussion about the book, the underground press of the Sixties, and the era’s political radicalism and revolutionary new culture.

Celebrating The Rag tells the story of The Rag, the legendary underground newspaper, 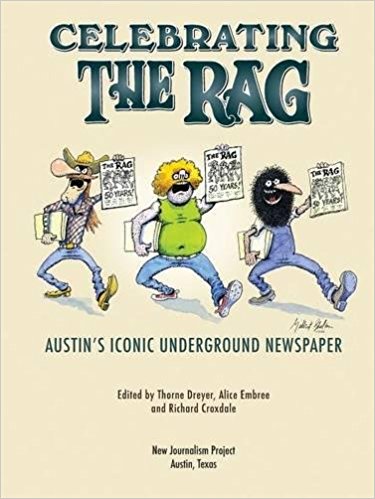 published in Austin from 1966-1977, that sparked a political and cultural revolution and helped make Austin weird. The book features more than 100 articles from The Rag’s 11-year history, plus contemporary essays and vintage art and photography. This collection captures the radical politics and subversive humor that marked the pages of this upstart newspaper between 1966 and 1977.

The event took place at Austin’s Book People, the largest independent bookstore in Texas, on January 5, 2017, and was broadcast the next day on Rag Radio.

Thorne Dreyer was the original “funnel” of The Rag in 1966. He now edits The Rag Blog and hosts the syndicated Rag Radio program. Austin activist Alice Embree, a veteran of the women’s movement and progressive politics, worked with the paper through much of its history. Richard Croxdale, who was involved in The Rag‘s later years, is a producer of People’s History in Texas’ documentary film about The Rag. Also in the discussion are Kerry Awn, an Austin artist, actor, stand-up comic, and musician who was a major contributor to paper, and noted documentary photographer Alan Pogue, who was The Rag‘s staff photographer.

Rag Radio is produced in the studios of KOOP 91.7-FM, an all-volunteer, cooperatively-run community radio station in Austin, Texas, in association with The Rag Blog and the New Journalism Project, a Texas 501(c)(3) nonprofit. The host and producer of Rag Radio, Thorne Dreyer, is a prominent Austin-based activist and writer who was a pioneer of the ’60s underground press movement. The show’s engineer and co-producer is Tracey Schulz and the staff photographer is Roger Baker. The syndicated show is broadcast (and streamed) live Fridays, 2-3 p.m. (Central) on KOOP in Austin, is streamed live at Radio Free America, and is later rebroadcast and streamed on WFTE-FM in Mt. Cobb and Scranton, PA., on Houston Pacifica’s KPFT HD-3 90.1-FM, and by KKRN, 88.5-FM in Round Mountain, CA — and is a featured podcast at Veterans Today. All Rag Radio podcasts can be found at the Internet Archive. Contact: [email protected].