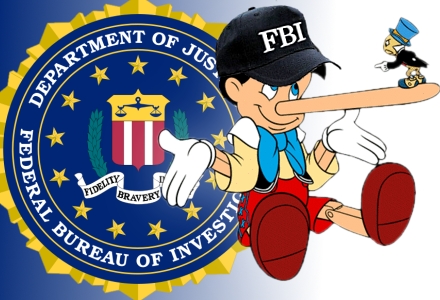 The FBI, which has been caught lying outrageously about last June’s  Orlando nightclub shooting, has arrested Noor Salman, the wife of alleged shooter  Omar Mateen. Salman was taken into FBI custody in the San Francisco area, and is being arraigned on federal charges in Oakland.

In his article “Noor Zahi Salman: Everything You’re Hearing About Me Is a Lie,” Sam Husseini points out that “the government has a lot of incentives to lie about this case They failed to keep people safe. So, what to do? Blame the wife. Blame the Muslims.”

Almost immediately after the shooting, the FBI apparently fed complicit media a long string of lies about Noor Salman. NBC and The Daily Beast – which, like the top echelon at the FBI, are owned by the Zionist-neocon mob – falsely reported that Noor knew her husband was going to shoot up the nightclub, went shopping for guns and ammo with him, and drove him to the nightclub before the attack to help him case the targeted location. Noor, horrified by the false accusations, offered to take a polygraph test. The FBI declined – then put out a false report that she had failed such a test!

So who should we believe, Noor Salman or the FBI?

The FBI has a track record of lying about terrorism cases in general, and the Orlando shooting in particular. For example, the Bureau is still shamelessly and transparently lying by denying that Mateen was a homosexual and regular customer at the Pulse nightclub.

This FBI lie is so transparent that even the whorehouse posing as a “debunker website” Snopes.com hardly even tries to uphold the official myth. In its entry “FBI: No Evidence That Orlando Shooter Was Gay” Snopes lies outrageously by omission, failing to cite the fact that Mateen’s ex-wife Sitora Yusufiy was the first to go public with the news that Mateen was gay. She says the FBI threatened her, telling her not to inform the media about Mateen’s sexual orientation – an extremely pertinent fact that blew the official “homophobic radical Muslim did it” myth to smithereens.

The Snopes.com “debunking” ends: “’The FBI obviously is trying to cover up their information,’ (a gay Pulse patron and Mateen acquaintance)  said of gay men who reported being contacted by Mateen. ‘I can go take a lie detector test. I know for a fact Omar messaged me.’” Memo to the Snopestitutes: Citing one of a long list of witnesses who know the FBI story is a coverup is not a very good way to end a pro-FBI “debunking” article!

Numerous patrons of the Pulse nightclub have confirmed the account; some had even had relationships with Mateen. There is no longer any question whatsoever about the fact that Mateen was gay and a regular at Pulse. Yet the FBI continues to lie in service to the “radical homophobic terrorist” myth – the message the Orlando false flag PR stunt was designed to send.

Unfortunately, the FBI coverup of Mateen’s sexual orientation is normal behavior for the Bureau. Any comprehensive list of known FBI lies about terror cases, or even just the one case of 9/11, would fill a whole book if not a multi-volume set.

So consider just one more FBI terror lie: The claim that Ibrahim Todashev, a key Boston bombing witness, was shot in self-defense by his FBI interrogators. In fact, the unarmed Todashev, helpless in FBI custody, was executed with a point blank shot to the back of the head. The obvious inference: Todashev knew that the Tsarnaev brothers were innocent patsies, and had to be silenced.

Would the Boston FBI really kill people for the (Zionist) organized crime cabal? That’s precisely what they did between 1964 and 1987, not only running the worst hit men as “informants” but actually carrying out gangland murders themselves on behalf of Boston area godfather Whitey Bulger.

We might also cite the FBI’s role not only in the cover-ups, but also in the murder plots against the Kennedies and Martin Luther King, Jr.

And let’s not even get into the suspicious FBI behavior in this year’s presidential election – one topic of my recent interview with VT Senior Editor Gordon Duff and columnist Ian Greenhalgh.

So if you end up on jury duty when and if Noor Salman comes to trial, just remember who it is who’s presenting the “evidence” against her.